Endgame Principles: 13 Most Important Ones Straight from The Experts 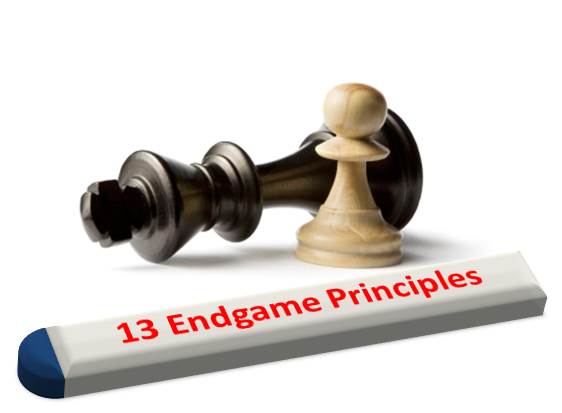 Endgame Principles: Today we will cover the 13 most important ones you should always keep in mind during the game.

These come from the greatest players of the past who need no introduction: Nimzowitsch, Capablanca, Kasparov, Keres, Benko, Tarasch, Botvinnik, and Kotov.

They were surely the endgame experts who dedicated their whole lives to these subjects.

1. The great mobility of the King forms one of the chief characteristics of all endgame strategy. In the middle game the King is a mere ‘super’, in the endgame on the other hand – on of the ‘principals’. We must therefore develop him; bring him nearer to the fighting line. – Aaron Nimzowitsch

2. The king, which during the opening and middle game stage is often a burden because it has to be defended, becomes in the endgame a very important and aggressive piece, and the beginner should realize this, and utilize his king as much as possible. – Jose Capablanca

3. A player can sometimes afford the luxury of an inaccurate move, or even a definite error, in the opening or middle game without necessarily obtaining a lost position. In the endgame … an error can be decisive, and we are rarely presented with a second chance. – Paul Keres

4. Endings of one rook and pawns are about the most common sort of endings arising on the chess board. Yet, though they do occur so often, few have mastered them thoroughly. They are often of a very difficult nature, and sometimes while apparently very simple they are in reality extremely intricate. – Jose Capablanca

5. Ninety percent of the book variations have no great value. That is because either they contain mistakes or they are based on fallacious assumptions. So, just forget about the openings. And, spend all that time on the endings. – Jose Capablanca

6. It is a well-known phenomenon that the same amateur who can conduct the middle game quite creditably, is usually perfectly helpless in the end game. One of the principal requisites of good chess is the ability to treat both the middle and end game equally well. – Aaron Nimzowitsch

7. If you are weak in the endgame, you must spend more time analyzing studies. In your training games, you must aim at transposing to endgames which will help you to acquire the requisite experience. – Mikhail Botvinnik

8. If you are weak in the endgame, you must spend more time analyzing studies; in your training games you must aim at transposing to endgames. That will help you acquire the requisite experience. – Mikhail Botvinnik

9. When I was preparing for one term’s work in the Botvinnik School I had to spend a lot of time on king and pawn endings. So when I came to a tricky position in my own games I knew the winning method. – Garry Kasparov

10. The business of the endgame is maneuvering to control critical squares, advancing or blockading passed pawns, preparing a breakthrough by the king, or exploiting the subtle superiority of one piece over another. – Pal Benko

11. In a rook and pawn ending, the rook must be used aggressively. It must either attack enemy pawns, or give active support to the advance of one of its own pawns to the queening square. – Siegbert Tarrasch

12. You will already have noticed how often Capablanca repeated moves, often returning to positions which he had had before. This is not lack of decisiveness or slowness, but the employment of a basic endgame principle which is ‘Do not hurry’. – Alexander Kotov

13. If you study the classic examples of endgame play you will see how the king was brought up as soon as possible even though there seemed no particular hurry at the time. – Alexander Kotov