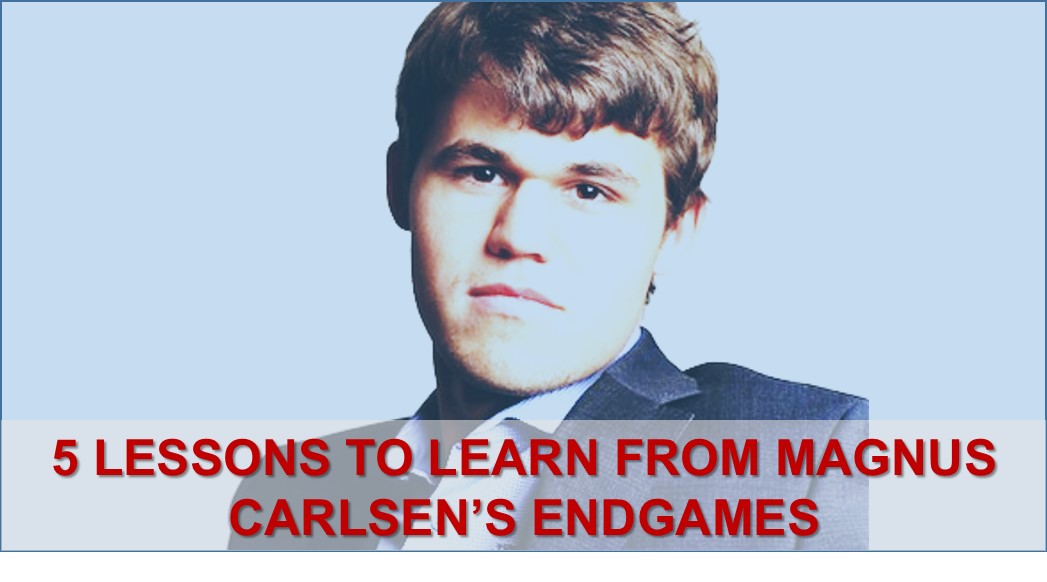 Magnus Carlsen is not only successful because of his tremendous tactics calculating ability, middlegame understanding, and photographic memory.

A big part of his success is due to his superior understanding of endgame positions, something not very common to the younger generation of chess players.

Often, even in dead equal positions, Carlsen is able to squeeze out the win. How does he do it?

Let’s take a look at these 3 examples:

To learn more about elementary chess endgames, I suggest you to check out our complete training course where we focus on learning how to play most common, practical endgame among many other things.

Let’s summarize the 5 lessons that we have learned from these endgames:

1. Always think twice when choosing between having a queen or the two rooks in the endgame. Queen is much stronger in open positions, when it can check the opponent’s king and win material in the process. Rooks are stronger when the king is covered and they can work together to support pawn promotion or attack the pawns which cannot be protected by just the queen.

2. Pushing pawns in the endgames towards the promotion square should be your main priority in many of the endings. You should always think about this powerful possibility. Not only it will require your opponent to alter his own plans to stop this serious threat but also, it will take up space from your opponent’s pieces to limit their mobility.

3. In the Rook + Pawn vs. Bishop + Pawn endgame the attacking side needs to exchange the rook for a bishop and a pawn, while the defensive side needs to prevent that from happening.

4. In the rook endgames you should be aware of rook checks. This is something that can cause a draw by ‘perpetual check’. Keeping some of the opponent’s pawns on the board maybe a good idea to cover up you own king from these checks.

5. If you have a pawn majority on one of the sides of the board, you should create a passed pawn and either promote it or give it up to capture all other pawns on other side of the board.

The examples don’t seem to load… 🙁

In Example 2, move 69 for blakc Kg7 would end the game faster.