Endgame Play: 7 Ways to Improve It 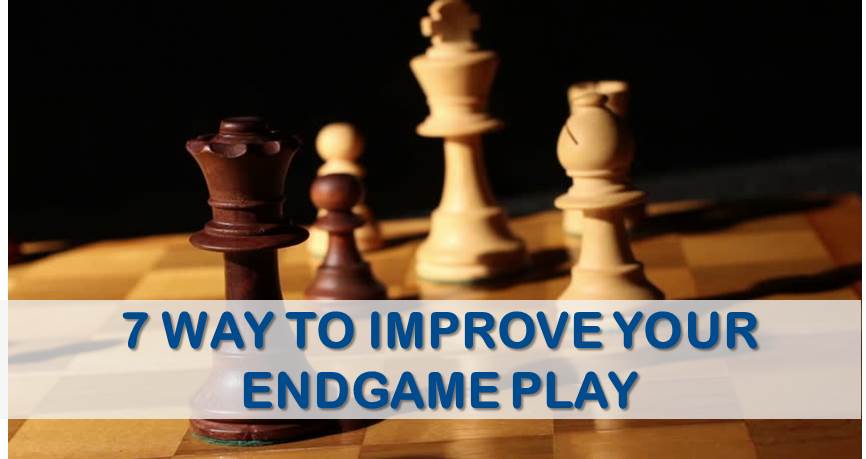 Endgame Play is thought of by many chess players as something unpleasant, boring and unfavorable to start with. That’s why oftentimes, even if they have a won ending they shy away from it and prefer settling things down in the Middlegame. That happens because chess players nowadays don’t have a depth understanding of the endgames which leads to drawing or even losing an otherwise equal position. The goal of today’s article is to change that. Here are the 7 ways to improve your endgame play.

The number one reason why so many players struggle with the endgames is that they don’t spend enough time on this part of the game. Some players don’t spend any time at all, thinking that it’s no point to study endgames if you may lose in the early Middlegame. This logic indeed has many flaws. It is not possible to become a strong chess player without understanding endgames. Similarly, you cannot become a good golf player if you don’t know how to putt. A long drive alone won’t make you a champion.

When you start putting hours into your endgame you will find that your Middlegame, as well as general chess understanding, will get better. That’s why the simplest way for many under 2200 players to improve at chess is to spend a bit more time on chess endings. It is a very effective recipe.

Many chess players that do spend time on endgames don’t study the right types of positions. They study complicated, uncommon endgames such as the two knights vs. two bishops’ endings with unbalanced pawn structure or two minor pieces. Also, few pawns vs. the Queen and a pawn. There are a lot of variations of these endgames and the chances are you won’t face it on regular basis.

To achieve progress faster you should spend time wisely studying only the important positions. Most under 2200 rated players would benefit from understanding the following positions:

You should understand how these endgames should be treated for both sides. Also, you should be able to perfectly execute those at any time of the day or even at night.

These and many more endgames are presented throughout the 21 Day Course and in the Endgame Package of the course. Since the endgames are so important for the majority of chess players, you will have a chance to work on it in every training day of the course. You will get exposed to theoretical concepts as well as practical examples and homework assignments. You will be able to play these positions perfectly.

Many chess players start studying endgames by jumping right into complicated positions such as Rook endings, etc. Trying to understand complex Rook endings without having a basic King and Pawn knowledge is similar to studying advanced mathematics without basic algebra background. It simply will not work. That’s why for 99.99% of the players it makes sense to start with the fundamental endgames such as:

– King and Pawn vs. King

Only once the basics are clear you should move on to something more advanced. You really shouldn’t take any shortcuts here.

4. Endgame Play should not intimidate you

Many players think that endgame is a very complicated part of the game, while in fact, it is one of the simplest and the most straightforward. In the endgame, where only a few pieces are present on the board, it is not uncommon to see players calculating 20 moves ahead. Everything is very precise and if you have the right plan, and know how the endgames should be treated you most likely will be able to win the game or at least to draw it (unless you are like 3 pawns down).

Endgame is the only part of the game, where an amateur with enough preparation (and favorable position) can hold against a seasoned GM. By simply realizing that and spending time on this part of the game you will start making progress in no time.

5. Practice the most common Endgame Play with a partner

Many chess players study endgames incorrectly. They simply follow the tutorials from Endgame Manuals, read how certain positions should be played, and think that’s already enough to understand what’s going on.

That reminds me of how my first chess coach was explaining the famous “short side defense” in Rook endgames. Everything was crystal clear. But when he set up a position and altered the move order a bit I was totally lost. The position did not look anything like what he demonstrated previously. I did not know how to proceed.

The lesson is simple. Once you think you understand the position, you should set it on the board and play it against a stronger opponent to see if you actually understand it. In most cases, the answer will be ‘no’. Then you can come back to review the theory and try again. That’s an iterative process. After a couple of times, you will understand the ideas and will be able to apply them even in slightly different positions.

In our 21 Days to Supercharge Your Chess training course, we understand the importance of a hands-on approach for chess training. That’s why we make you practice the endgames you have just learned against our sophisticated engine paired with endgames tables. Winning or holding your ground against it will give you confidence and the skill to do the same over the board.

Another way to improve your endgames is to closely follow the endings that strong GMs play in tournament conditions. When you follow the games, you shouldn’t just passively follow the moves. You should place yourself in their shoes and ask why certain moves were played, what’s an idea behind it and how would you respond. Taking notes and writing down the ideas helps as well.

You should use the final method to improve your endgame play in combination with the other techniques. You can track what kind of endgames you have the highest winning/losing/drawing percentage and draw conclusions about what positions you should spend more time on. This is a very powerful analytical technique that can help you to identify your strengths and weaknesses.

We have the whole section in the 21 Days Course which talks about it in detail and gives examples of how to use these kinds of tools.