I have written multiple articles on chess strategy and the middle game, but for some reason, I have avoided writing on the endgame theme. I was scanning through the “Lazy Person’s Guide to Endgame” by GM Ian Rogers published in January 2010 in Chess Life Magazine and decided to write my own thing. The first endgame analyzed by GM Rogers is the famous Queen vs. Rook ending. He claims that it is an easy win for the side with the queen.

I decided to go ahead and test this Q vs. R endgame against the Chessmaster Grandmaster Edition, setting the Queen for myself and a Rook for the engine. After about 20 tries I found this task to be impossible.

In fact, according to ChessBase most GMs are not able to win against perfect defense of the computer. I used Nalimov’s Endgame Tables and concluded that it is possible to win in 30 moves if white to move or 31 move if Black to win, and if Black doesn’t win the queen. 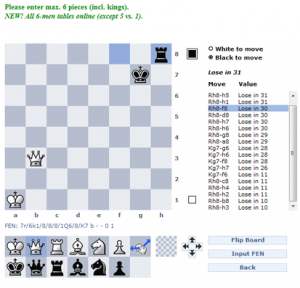 Most guides show the way to checkmate in well known Queen vs. Rook “Key” position (shown below), but missing most important part – getting to this position. They assume it to be an easy task, when in reality it turns out to be extremely complicated against the perfect defense.

The most difficult thing for a human mind to overcome in this sort of endgame is so-called “third rank defense”. In this defense weaker side places its rook on the third rank and not allowing opponent’s king to penetrate: 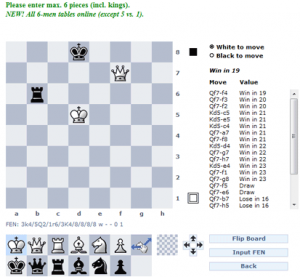 According to the Nalimov’s Tables there is a win in 19 in this position.

How to win Queen vs. Rook endgame? 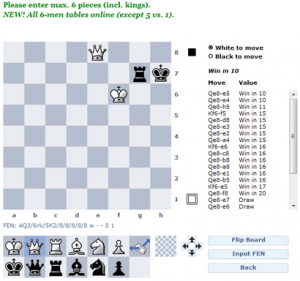 Why is it hard to win Queen vs. Rook endgame?

How to practice this endgame?

You can play this endgame by setting up your favorite chess engine to play for weaker side and try to checkmate it in 50 moves. It is also a great exercise which improves overall visualization of a chess board and especially the coordination of Rook and King and Queen and King.

Give it a try and comment about your accomplishments!

Before I read this, I always resigned those games when I was the weak side (Rook and king) Against a queen and a king
But this helped me a lot!
I tried to beat Stockfish using the winning side and it’s imposible !!
Thanks a lot for sharing your knowledge Yury 😆 Greetings from Mexico

The database is no longer stored at chessbase. If anyone out there has it, please send it to this email:

John Waitzkin points out that points are subjective to situation. For example, a bishop with no moves is useless. I feel that in the queen vs rook endgame, since the rook can stave off checkmate for 30+ moves, you might consider the rook to be around an 8, very close to the queen!

Yes there is a chance for a draw, but I would say not very large since all people (even the chess players) are prone to make mistakes… And it is a lot easier to make a mistake while under pressure and defending than when being a 4 points up.

Quick recap: I believe that if there are two roughly the same strength players playing this endgame the Queen will most likely win, since there are a lot of possibilities for forks winning the rook.

, want to ask about the chance of a queen vs. rook for a draw… do the player have only rook have a chance to have a draw with his opponent having a queen? thankc

Thanks, that’s a very good database. It’s not exactly a step-by-step but the recommendations are very useful.

you can find a database about this ending at: http://www.chessbase.com/newsdetail.asp?newsid=6366

Hello Jack, thanks for your comment. As I have written before, it is one of the most difficult wins to achieve when playing against perfect play (aka computer).

There is no simple step-by-step system I know of that can guide you to the winning position. There are only a few positions you need to aim for to either checkmate or win the rook by force, but to calculate a way to those (assuming a perfect play again) one needs to be able to calculate 10 moves deep, which is hard for most of us.

However, against human opponents you can still try to trick them into some sort of fork giving series of checks. Good luck.

I would write about it at some point in the future. Glad it was helpful for you! 🙂

Ya never thought about qeen vs 2 bishops. But of course thats totally correct guess you learn something new every day.

Good point, Shiang. I never really thought about the point difference in mating. But if we think about it, it is true, since Queen vs. Two Bishops is a draw 9-6=3 and 3 < 4.

lol, nm i’ll never get to learn it. For amatures bishop knigt forced win is the hardest. But it’s actually queen vs rook thats the hardest “forced” win(in a neutral position where the queen can’t be lost). No wonder by point difference it’s only 9-5=4. Very low difference as rook alone is 5.