How to Improve Your Endgame Play: Complete Guide 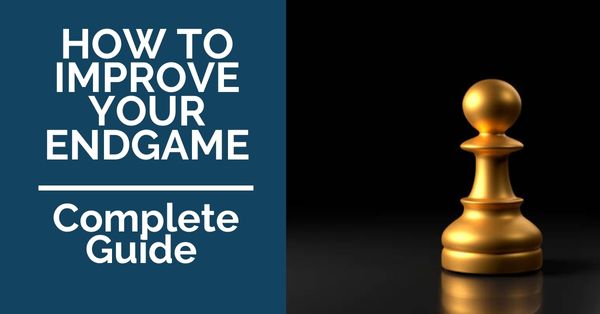 Chess can be divided into three parts: the opening, the middlegame, and the endgame. Each one of them is equally important and, in order to become a strong player, one should include all of them in their training routine.

However, many players frequently tend to dedicate more (or all of their time) to studying the opening and solving tactics, ignoring the more time-consuming, sometimes even boring positional themes and endgame ideas. It is also usually easier to find resources for opening study or solving puzzles, but if you want to improve your level you have to include everything in your training sessions.

Very few games end in the opening nowadays. And, the difference in strength between players, you can usually in the middlegame and endgame. A strong player will test your knowledge in all three parts of the game; even if you play the middlegame well, you will still have to show how good your endgame technique is. It is all too common that chess players of all levels don’t give enough attention to the final part of the game, which can lead to many missed opportunities and bad results.

If you have also been postponing the study of the endgame, it’s time to get to work!

First of all, you should make sure that you master very well the most important theoretical endgames.

Pawn endgames, for example, might look very simple, but when you start studying them you will see that this is far from true.

However, before you move to more complicated positions, ensure that you know the basics to perfection – the theoretical winning and drawing positions with king and pawn versus king and the concept of the opposition, perhaps one of the most important in pawn endgames. Increase the difficulty gradually until you have fully understood how to use the opposition, both the distant and close ones.

Rook endgames are another very common endgame category in practice. Contrary to the popular belief, they aren’t always drawn. And, it’s very easy to go wrong, even at the highest level. They are very tricky and it takes a long time to fully understand them, but it is crucial you know the most important theoretical positions: the Lucena (also known as the bridge) and the Philidor’s position.

All these positions are very important and, if you know them well, you will know what type of positions you want to go in the endgame or what to avoid if you are trying to win.

Besides the theoretical ones, you should also see some practical endgames. The best way of learning the main ideas and principles in the opening is by studying a lot of Grandmaster games. Some of the most important ones are:

The King is very important in the endgame play.

This is the biggest change when you transition from the middlegame to the endgame. The mindset needs to change completely. In the middlegame the king can become a target; the pieces can attack it and hunt it down if it is too exposed.

However, in the final part of the game, the king no longer needs to stay hidden and defended. On the contrary, it becomes the key piece in winning the game; an attacking piece.

In the endgame, an active king can create threats and attack weaknesses. If needed, the king can also fulfill defensive tasks. Either way, centralization is usually key and you will see that most players will start bringing their king a little closer to the center when the endgame approaches.

However, remember that the play will always depend on the position you have on the board.

If Queens are still present, make sure that bringing your king to the center won’t unnecessarily expose it to checks or mating ideas!

If you are in a worse position and need to defend, try to defend actively.

The concept of initiative becomes key in the endgame; sometimes it can even trump material. Giving up a pawn can be a very small price to pay.

And, in that way you can activate your pieces and corner your opponent. From a practical point of view, this is how most turns of tables happen.

The pawn structure is also very important in the endgame play.

Pawn moves should be assessed carefully, as they can create weaknesses that an experienced opponent could take advantage of. A strong player will try to provoke pawns’ moves and create weaknesses in their opponent’s camp.

Weak squares can mean a path for the king to infiltrate later in the game, for example. A fixed weak pawn could be a target for their pieces at some point. Even if they might not look like much, a strong player will usually find a way to use those weaknesses and win the game.

So, pay attention to the pawn moves and, if possible, don’t create too many weaknesses in your own camp. On the contrary, try to apply this strategy and weaken your opponent’s structure.

In general, you should advance passed pawns to force the opponent to block them and become passive. However, you should make sure that you can still protect them – you don’t want to lose them. If you have to defend, creating a passed pawn is one of the typical ideas of counterplay.

Learn when and what pieces to trade.

This is one of the most important problems for both amateur and strong players – exchanging the right pieces. There are a lot of things to asses when going for a trade.

Then avoid trading it.

When going for the endgame, try to asses what pieces would be better to keep. For example, if you are down one pawn, rook endgames or minor pieces endgames usually have the highest drawing possibilities. Try to avoid trades if this brings the opponent’s pieces into more active squares.

When deciding which minor piece to keep, look at the pawn structure and decide which one works best. Remember to think also about the tandems that work best.

For example, Queen and Knight usually work better together than Queen and Bishop.

The fact that endgames require only technique and patience is a misconception. In fact, the calculation is a big part of playing the endgame well.

You can solve especially pawn endgames, almost mathematically. Keep training your calculation, as this is also a part of the process of improving your endgame play!