Rook vs Knight Endgame is today’s topic. It is one of the most fundamental endings every chess player must know. Is it a win or a draw for the stronger side? Let’s find out!

Also, today we will continue talking about chess endgames. Previously we have covered some of the most important endgames including Knight and Bishop Checkmate, Two Bishops Checkmate, Queen vs. Rook, Typical Rook Endings, Opposite Color Bishops, King and Pawn, etc.

This endgame is not as complicated as many players think. Here are the 3 most important points to keep in mind:

1. If the Knight is in the red zone, and you can trap him there the position is won

2. If the Knight is in the yellow zone, you have some winning chances

3. If the Knight is in the green zone, it’s usually a draw with a right play 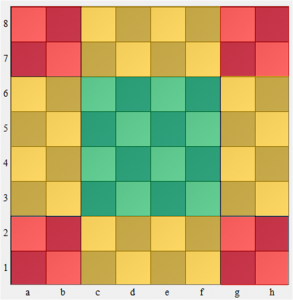 Remember that map and it will help you to evaluate the winning chances of Rook vs Knight positions as well as masters do. In order to understand how to actually convert those favorable positions into a win let’s take a look at the following examples.

In this position the knight is located in one of the corners of the board, meaning there is a large chance of winning the endgame for white. The key in the positions like that is to isolate the knight and don’t allow it to escape from the corner.

We do it by taking away all the escape squares with the rook and king. 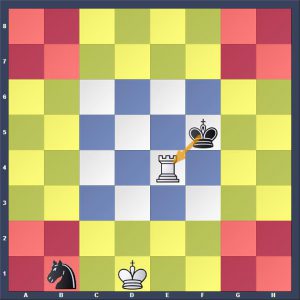 In this position, the Knight is located in the yellow zone. Therefore, there is a chance of winning this game for white.

Using the same idea as in the example above, we isolate the Knight from escaping into the center of the board. 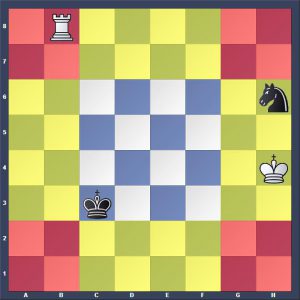 This position looks somewhat similar to the example above, with just one difference: the white King defends the knight. That changes everything. Black is not able to drive the Knight away from the King or checkmate the white king.

This position is drawn with correct play from both sides. 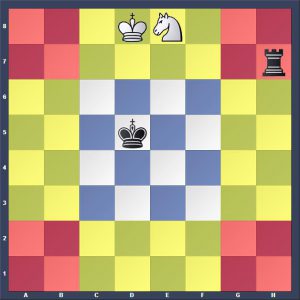 Tip: If you playing the Rook vs Knight Endgame for the side with a Rook, you want to keep the opponent’s King away from the Knight and try to trap it in the red or yellow zone. If you are on defending side, you want to run your Knight to the green zone and/or keep your King nearby to defend it.

Check out the chess books list, every improving player must-have.