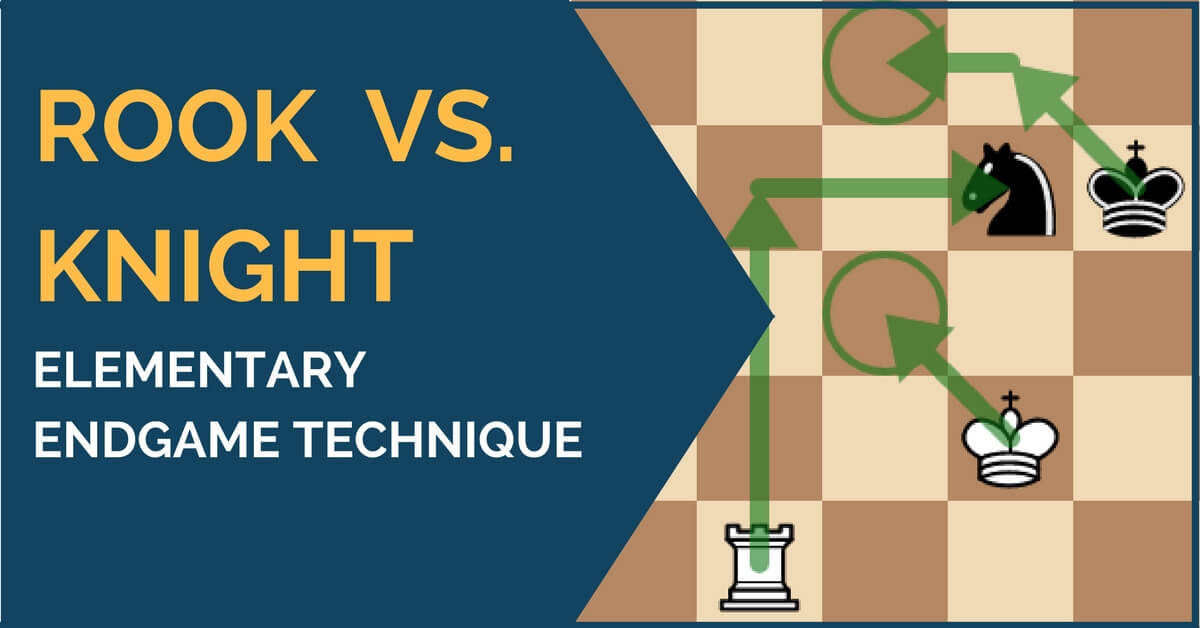 Rooks vs Knight situation might give you headaches during a practical game if you haven’t studied it beforehand. Continuing our series of articles on important endgames that every player should know, we are going to present you today this situation. From a theoretical point of view, this endgame is a draw.

There are, of course, exceptions and you must know what to be looking for. Also, what to try to avoid in order to achieve the desired result. If in the case of rook versus bishop things looked rather easy, in this case, the weak side must be more careful, as many times the drawing moves are unique.

Most of the time this endgame is achieved after an under-promotion when getting a queen is not an option because of the back rank mate. Hence, the king is already cut on the last rank and the knight doesn’t have many squares available. Even so, the endgame should be a draw with correct play.

There are two important rules that you have to remember in order to hold the rook against knight endgame:

Rooks vs Knight – Rule #1: Avoid getting the king and the knight in the corner

This is the first situation in which the strong side has a forced way to win, independent of which piece occupies the h8(h1)-a8(a1) square. Even if the knight isn’t standing on the last rank, but on g7(g2)-b7(b2), you will still lose the endgame. This is a particularly bad square for the knight since it neither has good squares to jump on nor can protect the king from mating threats.

You do not need much analysis for the above diagrams; white is immediately losing. Black will either mate or get the white’s knight.

Rooks vs Knight – Rule #2: Keep the king and the knight together

This is the key to achieving a draw in this endgame. Once the knight gets too far away from the king, the chances that you lose it will increase. The strong side can slowly cage the knight in, first restricting its movements and then combining double attacks with discovered checks in order to trap it. Sometimes the two pieces are forced to briefly separate without anything happening, but make sure to bring them back together as soon as possible.

These two guidelines should help you find the right moves most of the time, but it is also important that you play through some examples, as mistakes are often seen in over-the-board games. If you haven’t practiced it before, it might get difficult to find the only moves when needed.

Let’s take the following diagram where we see the former World Champion William Steinitz [refer to his 10 principles] winning such an endgame with the black pieces: 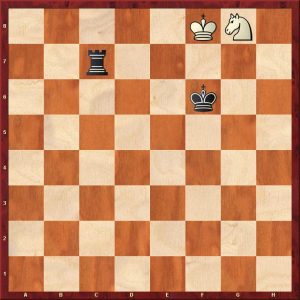 White has just under-promoted on g8 with a check. Even though the king is cut on the 8th rank, the king and knight are not in the corner, so he could have still held the draw. However, he instead quickly collapsed after wrongly alienating the knight from the king. See how the game went and replay through the commentaries to see the correct defense:

If in the case shown above the defense requires more care, it should be rather easy to defend the endgame if the king is in the center. It is difficult for the strong side to force the rival king to one of the edges, but even so, you already know it is still a draw. 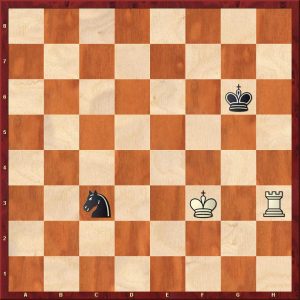 White has just captured a black pawn on h3. In order to secure the draw, what black first needs to do is bring the knight close to the king. He continued here with 90…Nd5, in order to place the knight on f6 next. White tried to trick his opponent for a few more moves, but with no success:

As you have seen in these examples, the defense is quite logical once you know the basic rules that you need to follow in this endgame. However, you should always treat it with care and not relax too soon.