e5 Pawn: Typical Pawn Structures. A Strength or a Weakness?

e5 Pawn is an essential pawn structure and understanding pawn structures is one of the key aspects of chess. The pawn structure is very revealing, as it not only tells you on which flank you must play but sometimes (and very often I may add) it reveals the character of the play. 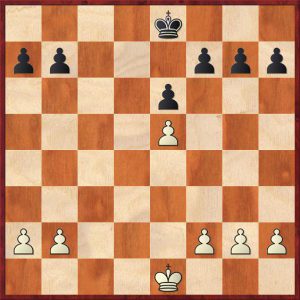 For example, it’s very likely that when you have a damaged pawn structure your play should be aggressive. In this case, creating threats and making active play should be your main priority when selecting your candidate moves. The world of pawn structures is huge and it is very entertaining to study; you can find out how from different openings you can land in the same type of positions and therefore apply the exact same plans.

In this article we are going to discuss a common pawn structure that arises quite often in games: pawn symmetry, but white (or black) has an advanced pawn on e5 (e4). See the diagram below:

This common pawn structure can be reached from several openings: Caro Kann, Alapin, Slav, Queen’s Gambit Accepted, French, etc. If we concentrate solely on the pawn structure, we should agree that black is slightly better. The pawn on e5 turns out to be a weakness rather than a strength in such positions.

However, in the middlegame and with the board full of pieces, the e5 pawn can become the leading soldier of an attack. It restricts the enemy’s pieces and removes the defending knight from f6, which makes the black king weaker and a potential target.

We can conclude that in this pawn structure white’s chances are associated with attacks against the kingside and active play, while black should try to prevent the attacks and aim for the endgame where the e5 pawn will most likely become a liability.

Let’s have a look now at some examples that will give you a better understanding of what’s exposed above. 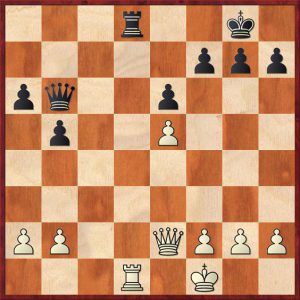 This is a very instructive game that Maroczy won. The endgame in the diagram above is not easy to defend at all. White is tied up to the defense of the e5 pawn and has no possibility of creating active play since there is no material left and black doesn’t have any weaknesses. It was not only the endgame that Maroczy played at a high level; in the middlegame he managed to cool off white’s intentions of an attack, showing exactly what one should do when playing these positions. See the details here:

Outpost around the pawn structure 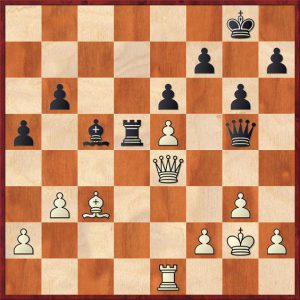 This shows the difficulties white has when playing this pawn structure with reduced material on the board. Basically, white remains passive while black keeps improving his position step by step and imposing small threats. As you might have noticed by now, one of the drawbacks of a pawn on e5 is that white has no control over the squares d5 and f5, so black can use them for his pieces.

In this game, we see black putting pressure on white from a slightly superior position. The main technical difficulty here is that white’s knight on f3 defends e5 comfortably from a light square that cannot be attacked. Black will need to remove it, eventually.

It is instructive to see how Delchev achieved this. He just played g5-h5 and g4. Black could have improved in certain moments, but, in general, Delchev executed the plan correctly. See the full game here:

We hope you have enjoyed this article learned how to play these positions. So, the next time your opponent offers you a draw in this type of endgame because it seems equal, refuse confidently and go on to win it! Thank you for reading!