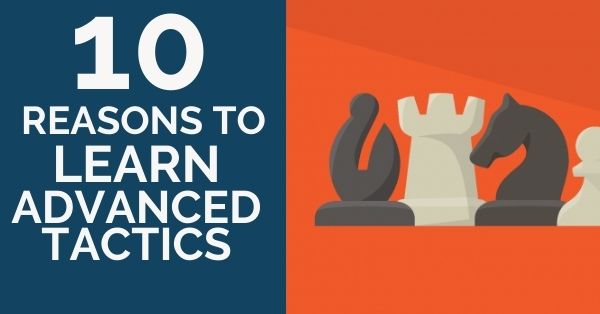 Tactics is an important part of any chess player’s training.

They help keep the mind sharp, but also improve your tactical vision. Your brain will learn to recognize the most common tactical patterns, so you can easily spot them during your games. There’s nobody there to tell you there is a tactic while you’re playing, but if you have solved a lot of tactics your eye will immediately be drawn to them.

Once you can spot the geometrical motifs fairly easily, you can move on to more advanced tactics.

These will teach you to:

This is probably the most important point in studying advanced tactics – you learn new patterns, new sacrifices, and new ideas that you can then apply in your own games. Once you see them, it is easy to recall them in different positions and see if they work.

2. Apart from the typical geometrical motifs, you learn to notice other things

Overloaded pieces, for example, is a common theme in games and it could many times make possible different sacrifices. You learn to see not only one or two-move tactics, but more complex ideas that could require seeing more moves in advance. Also, because you have seen and studied them before, it should be easier to calculate and execute them during your games.

3. Deliver the final blow in an attack

There are games where you are attacking, bringing all your pieces to put pressure on your opponent’s position, but they still seem to defend well. In positions where all your pieces are ready you can sometimes sacrifice something in order to open the position. Once this is done, you can reach the rival king and get some material advantage or deliver mate.

4. Look for ways to disrupt your opponent’s pieces

This is another idea you learn from solving advanced tactics. Interference can be a great weapon to cut your opponent’s pieces off and pick something up – whether it is a more valuable piece or an unstoppable mating threat.

From the very beginning we are taught that, when promoting a pawn, we should go grab that queen and replace the pawn with it. Some advanced tactics, however, are based on entirely different ideas – promoting a knight or even a bishop in order to win material or checkmate the opponent’s king.

By seeing many games, you will learn that initiative is very important in chess. The part that has it is dictating how the game will go and forcing the opponent to make precise moves in order to keep the balance. Sometimes, the initiative is even more important than the material. It is up to you to assess whether this can be true in your own position, but it will definitely be easier for you to do so if you have seen similar ideas before.

Here I’m not referring to one move threats; but subtle traps that aren’t easy to spot by our opponents. Advanced tactics help develop your imagination, which is extremely useful in these situations.

Again, imagination comes to the rescue. No matter how bad your position is, you should never give up and try to make your opponent’s life as hard as possible. You never know when you could swindle the game in your favor. You can come up with stalemating tricks, sacrifices to give a perpetual check, or other tricky ideas.

In many positions, the way the pieces are placed can make possible more complex tactics. If you have solved enough puzzles or seen games, it will be easy for you to identify them. For example, the Greek Gift sacrifice usually requires an immediate knight check on g5/g4 followed by bringing the queen. Also, having a pawn on e5/e4 is most of the time an important signal that your attack should work.

10. Last, but not least, they will help you develop your calculation skills

It is impossible to solve a complex tactic if you are missing things on the second or even third move. You will learn to look for options, but also, perhaps the most important, to try to find your opponent’s best defense.

As you can see, a mastery of tactics, both simple and advanced, is essential to a competitive chess player. Don’t be put off by the number of moves you sometimes have to see ahead; it is more important to see and learn the patterns, so you can then recognize them in your games. Good luck!