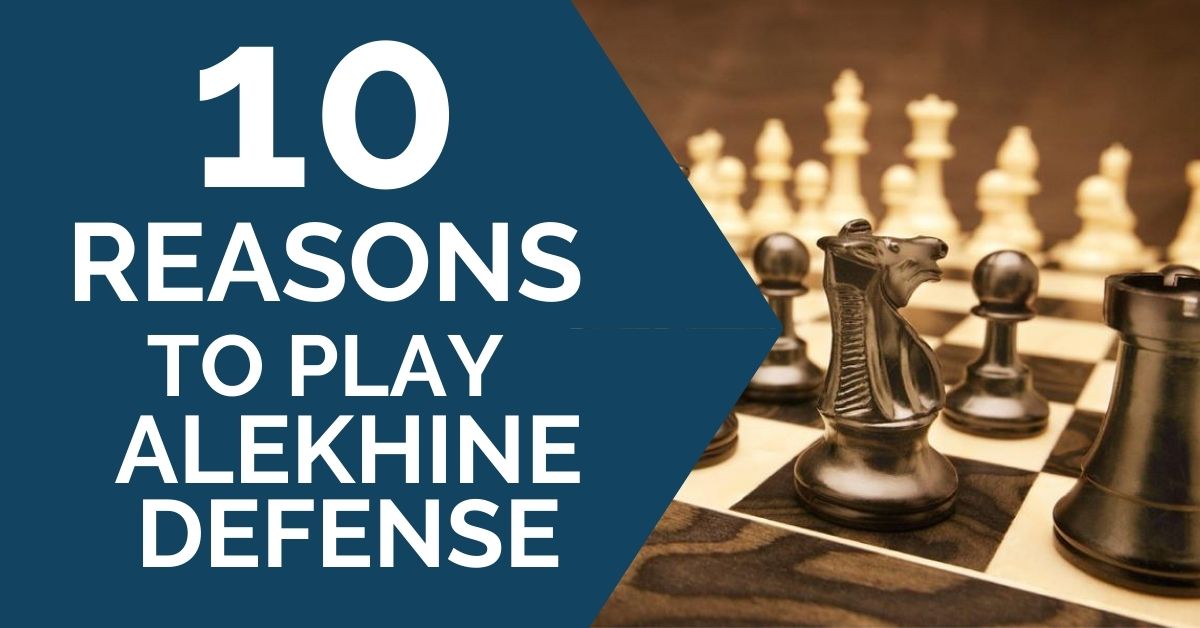 The Alekhine Defense is the most famous example of a provocative opening. Black meets 1.e4 with 1…Nf6, attacking the central pawn on move 1 and inviting it to move farther. It is well-known pawns cannot go backward and hence leave weaknesses behind themselves. Still, it is quite a common scenario when White starts pursuing that knight with their pawns, grabbing as much space as possible but ends up losing the game badly because of overextending.

Fourth World Chess Champion Alexander Alekhine introduced this opening 100 years ago (Back in 1921!) and White players still have not found the refutation. It is a sound and interesting opening that is worth a try and here are 10 reasons why.

Usually, 1.e4 players spend most of their time preparing for 1…e5 or 1….c5. They also have to know well what to do against the other popular openings such as the Caro-Kann, the French, the Pirc. In most cases, there is no time left for a serious investigation of the Alekhine Defense. This makes it a good surprising weapon for those seeking unbalanced positions and who want to avoid their opponent’s opening preparation.

2.  Getting your opponent out of their comfort zone

Chess players feel comfortable playing against the openings they know the best. With the Alekhine, we not only drive the game into uncharted waters but also give White much freedom to make mistakes. It is easy to go astray and lose the track of the game in such situations.

3.  Especially good for rapid and blitz

All of the above-mentioned will work even better in shorter time controls since your opponent will not have enough time to deal with the problems. That is a general rule: a better prepared or experienced in the openings player prevails in rapid and blitz.

Since All of Black’s pawns are on their initial squares at the beginning of the game, Black retains the choice of how to place them. This flexibility allows to try different setups and pawn formations and keeps White guessing about Black’s intentions.

5.  Leads to playable and unbalanced positions

It is a provocative opening that aims to destabilize White’s position and get an unbalanced game. Of course, with precise play, White can obtain some advantage, but this is not the opening you play to equalize and make a draw anyways. The arising positions are always playable for Black and allow possibilities to play for a win.

As described above, this is a provocative opening. If White doesn’t know precisely what to do they will most likely either overextend their position trying to punish Black or play too calmly, avoiding any risk. In both cases, Black has nothing to complain about!

7.  There is always room for creativity

The Alekhine is not as researched as the other popular openings and it is easier to find unexplored lines and new positions here. It gives both sides a broad choice from the very beginning which makes it interesting to play and allows varying different setups.

In the main lines of the Alekhine, Black’s plans and ideas are quite easy to follow and remember. The maneuvers are well-known and can be grasped by studying model games. It is important because the more experienced player will have more chances to win in the arising positions.

9.  Played by many strong grandmasters

This opening was frequently used by such strong grandmasters as Ivanchuk, Rapport, Nakamura, Mamedyarov, Bortnyk, Kovalenko, and others. Magnus Carlsen has been using it with great success as well. The most remarkable moment in the history of this opening was when Robert Fischer employed it to defeat Boris Spassky with Black pieces in their World Championship Match in 1972.

10.  It will teach you both strategic and dynamic play

This is a versatile opening that will teach you to play actively to seize the as well as to positionally maneuver your pieces to outplay your opponents slowly.

Want to include Alekhine Defense into Your Repertoire?