10 Reasons to Prepare a Surprise Weapon for Your Next Game 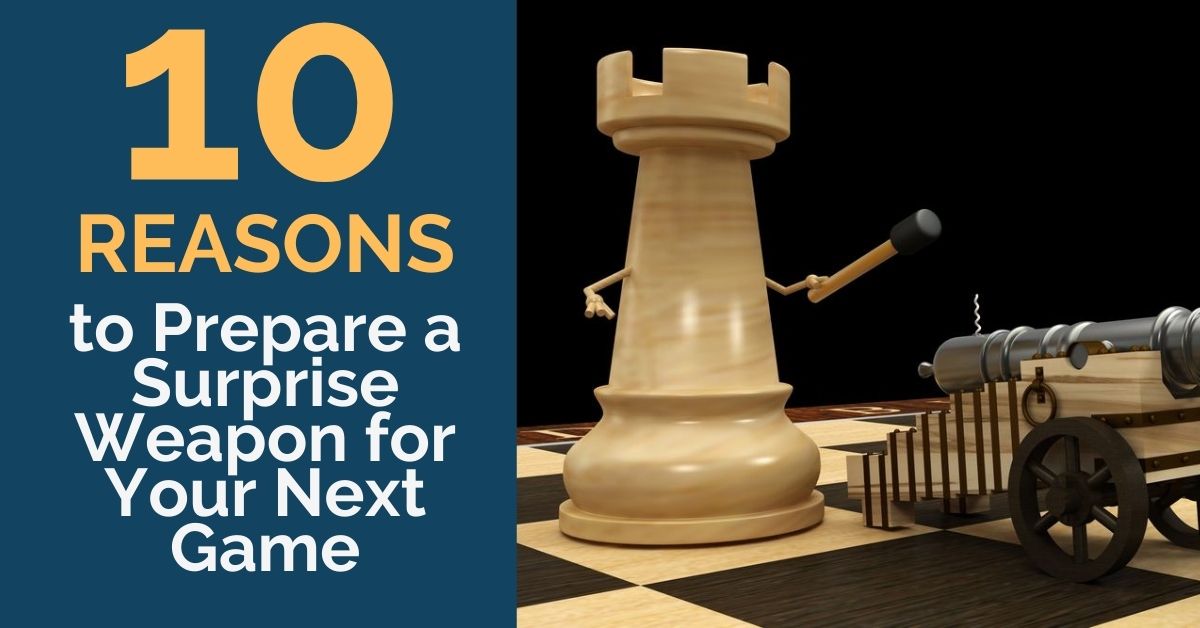 The impact that an opening stage makes on the rest of the game is difficult to overestimate. If you get a great position out of the opening, you can defeat even a higher-rated player. On the other hand, if you end up in a worse position after the beginning phase, you might struggle for the whole rest of the game. That is why opening preparation becomes so important.

When preparing for the next game, there are basically two approaches available: you can play what you always play or attempt to surprise your opponent. Both ways have their pros and cons, but the latter one looks more promising. In this article, let’s examine 10 reasons to prepare a surprise weapon for your next game.

Playing the lines that you have a lot of experience in is awesome but you should always keep in mind that most likely your opponents will prepare against it. In the opening stage, they will play according to the engine’s or some strong grandmaster’s recommendations. It places you in a troublesome situation, and you may end up losing a game because of that.

2.  It gives you a psychological advantage

On the other hand, when your opponent spends hours preparing against your main lines and you play something else… Imagine what goes in their mind! It throws away all of their hopes and expectations about catching you in the opening and makes their home preparation in vain.

3.  It puts your opponent under pressure from the very beginning

Once you surprise your opponent, they will have to realize whether you prepared any certain traps against them or why else you chose another opening. They will doubt their decisions and be afraid of your preparation. It makes their situation even more uncomfortable which will eventually lead to dubious moves.

4.  It gives you an advantage on the clock

All of the above mentioned will result in your advantage on the clock, and your opponent might eventually get into time trouble. Being short on time they most likely will commit more mistakes. This increases your chances to win the game drastically.

5.  It saves your energy

When you know what to do in the opening, it takes you less effort to come up with good moves and therefore you will have more time and energy saved for the middlegame and endgame. More time and more energy mean fewer mistakes!

6.  You can seize the initiative in the opening

If your surprising weapon works out well, apart from the advantage on the clock, your opponent will end up in an unknown position and will most likely commit a lot of mistakes. This will lead to your advantage on the board and increase your chances to outplay him.

It is not only about one game: you become unpredictable in general. When you play only one opening, for example, the Najdorf Sicilian, your future opponents might prepare a specific line for one game and follow books’ or engines’ recommendations to beat you. On the other hand, if you surprise your opponents frequently and play various lines, they will not know what exactly to prepare against. It makes their preparation skin-deep and less dangerous for you.

8.  You get to practice different types of positions

If you stick to the same openings and never try new things, your chess understanding becomes narrow which slows down your improvement. Therefore surprise weapons are good not only short-term (in a certain game) but also long-term: by extending your knowledge of middlegame plans and ideas.

9.  It is going to improve your results

To surprise your opponents you have to work on your openings consistently. It requires a lot of work and effort from you but will reward you with interest.

After all, it is something that makes chess so interesting to play: new ideas, feelings, emotions, creativity… It is definitely worth it!

Here is a secret weapon against King’s Indian Defense… play the Semi-Averbakh variation!

Get the full library of 20 secret weapons against the most common openings for white and black! 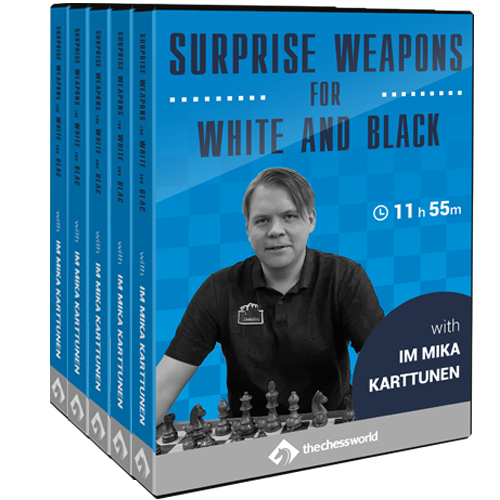 Click here to get Surprise Weapon for White and Black