Kasparov’s Games: 10 Reasons Why Club Players Should Study Them 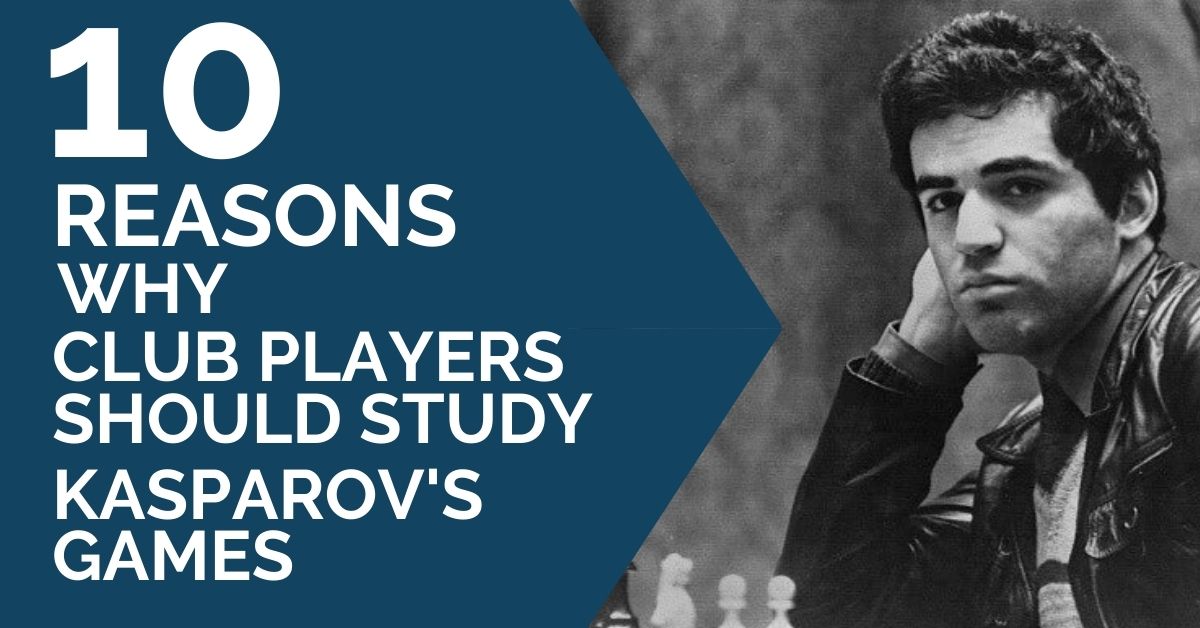 Kasparov’s games and himself weren’t called the ‘Beast from Baku’ for nothing. He was indeed a “beast”!

His style of playing was more like a herd of full-grown African buffaloes and zebras charging toward you… as Thanos said, dread it, run from and it still arrives.

His style of chess was extremely powerful, and his opponents cowered even they pushed the first move on the board. They were lost even before the game started.

This is exactly why you, as a club player, need to study his games. Only when you go through his games, why he was considered an almost invincible opponent. What made him so dangerous? Was he always tactical, regardless of what the position demanded? Where did he shine the most – openings, middlegames, or endgames?

Most importantly, you would imbibe a few unique qualities from him that might help you set your game miles ahead of the rest.

1. Kasparov’s Games: Playing on the whole board

Rule of thumb: make your opponent “sweat”. The more he sweats, the higher the chances of his blunder.

His opponents were not amateurs, as you can imagine. Why would they still get defeated like one? It’s because Kasparov’s style of chess was super direct and active—every move had ONE purpose, that is, to attack, attack and attack. You could imagine getting your position pummeled almost from the move one. Now, the best way to play against an aggressive opponent is to counterattack. Some of his opponents made the mistake of going passive instead. That cost them the game.

Rule of thumb: if your opponent takes a step back, there is your chance to grab the initiative.

Okay, so every chess player, low rated or not, knows that a bishop pair is a strong weapon in the arsenal, especially in open positions and endgames. Do they know how to utilize it to its fullest potential though? No. Kasparov loved the bishop pair and often yielded them like two swords on two hands! Check his games to see how he maneuvered them to destroy his opponents, especially in the endgames.

Rule of thumb: a bishop pair is only as strong as the player that yields them.

Kasparov was super smart at grabbing the initiative—he was often the one calling the shots and his opponent would just react. Even if it meant throwing in a piece sacrifice, Kasparov didn’t hesitate. He would often go for the most forcing lines that would leave no choice for his opponents but to dance along with the tune from the Kasparov’s pipe. What’s more important, he didn’t let the momentum fizzle once it started.

Rule of thumb: once you grab the initiative, don’t let it go.

Kasparov was one of the greatest chess players of all time. And one key factor behind it was that he knew when to start attacking. Just like the tiger that would wait for the right moment to pounce on his prey, Kasparov shuffled his pieces around until he saw an opening. Once he found that, he charged and didn’t look back. He had an impeccable sense of timing and that is the hallmark of a good great chess player.

Rule of thumb: know when to launch the attack. Too early will wreck your position. Too late will make you lose the advantage.

6. King in the center

Kasparov often exploited his opponent’s lack of development and king out in the open. He would go on the offensive, breaking open the center and pushing all his pieces for a full-on king hunt. In his Leningrad-London match against Kramnik, he sacrificed a queen and a rook without a care in the world, because he had a monstrous pawn drilling through the kingside, ending up grabbing both enemy rooks and promoting to a queen. And it ended in a checkmating position.

Rule of thumb: if your opponent’s king is in the center, go for a full-on king hunt.

This is definitely one of the biggest problems that a lower-rated player faces during his games. Not so much for advanced-level players. Your opponent plays a symmetrical pawn structure and you are out of ideas as to how to proceed next. What did Kasparov do? Kasparov usually exploited this to his advantage because he knew there are inherent flaws in a symmetrical structure that often starts slow but ends up giving a huge advantage to one side.

Rule of thumb: when your opponent goes for a symmetrical structure, do as Kasparov did.

They lead to positional imbalances. Kasparov knew this. Most importantly, it would sway in favor of the one who had a more active bishop. You would see in his games that he not only knew how to activate his pieces but also how to restrict his opponent’s pieces. Especially in these situations where his bishop would often turn out to be super active and even lead to tactical ideas.

Rule of thumbs: studying Kasparov’s games can help you master the art of playing with opposite-color bishops.

If you want to become a reasonably good chess player, improving your calculation skill should be at the top of your priority list. Did your coach say that you can get by without calculating the next 5 moves ahead? Please, FIRE HIM! Even in positional situations, you still have to calculate the exchanges and keep on till quiescence. In tactical positions, you might have to go as far as 20-30 moves ahead.

Going through his games will give you an understanding of how deep Kasparov calculated and how you should do the same in your own games. As Kasparov said, chess is mental torture.

Rule of thumb: keep calculating till your middle name is “calculation”.

Though it is not advisable to go with your intuition at your rating level, you must still pay attention to it when you are playing a serious game. It’s not whether you are right or not. What matters is that if it feels right to you and you can’t find an instant refutation of the same, your opponent won’t either. He will probably make a mistake and give you the advantage. However, don’t do it in quiet positions. Do it in positions where you have the initiative and your opponent is already under pressure.

Rule of thumb: Follow your brain but do listen to your heart at times.

Learn from the ‘Greatest of All Time’

GM Gyula Pap is here with his brand-new course ‘Learn from Garry Kasparov’, a huge 10+ hours of video training to help you decode the complex move choices in his games, the general approach toward chess, and how to simply run over his opponents like a steamroller!