10 Things to Learn from William Steinitz 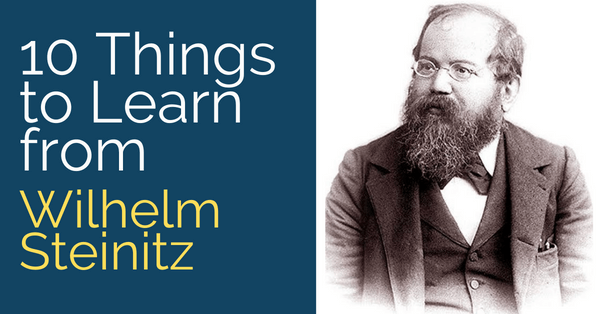 Why study William Steinitz? One of the most effective ways to study chess is to analyze games of the best players.

How do you choose a player to study from?

It can be based on what you want to improve in chess. Usually, people recommend learning how to attack from such players as Tal and Kasparov. For positional chess, Capablanca, Smyslov, Karpov, and Carlsen come to mind. These World Champions have played a lot of masterpieces and thus, provided us with much instructive material.

What about the first official World Champion, William Steinitz? It seems like modern players tend to underestimate the instructive value of their games. It is understandable, William Steinitz’s legacy seems to be too old-fashioned already (he lived from 1836 to 1900).

Nevertheless, it is Steinitz who is called the father of positional play. He was a deep thinker who realized and formulated the principles of chess that proved to be working and stood the test of time.

His games are instructive and show a great variety of ideas. Below you can find out more about the lessons we can learn from William Steinitz. (You can also see his 10 Best Games here)

While most players would only look for ways to attack in any position, Steinitz realized chess had to be played in accordance with certain rules.

Every position has to be evaluated, and the following plan of action has to be based on the evaluation. For example, if the opponent’s king is safe but the pawns are weak, it is more effective to attack the enemy pawn’s weaknesses rather than the king.

The advantages could be held in better piece placement, center control, pawn structure, and many other elements. This idea has influenced chess so much that nowadays it is hard to find a strong player who doesn’t pay attention to the positional rules of the game. Many players even implement evaluation exercises in their training sessions to get better at it.

Steinitz’s theory claims that advantages can be collected. At some point, the accumulated advantage gets big to such an extent that the opponent cannot defend the position anymore. This idea is the foundation of the playing styles of Anatoly Karpov and Magnus Carlsen.

They patiently collect tiny advantages and eventually turn them into something big. According to Steinitz, if the position is equal, the sides should maneuver until someone gets an upper hand. If both sides play precisely, the position will remain equal. As you probably know, Karpov and Carlsen are great at maneuvering and squeezing blood from a stone. They often outmaneuver their opponents in calm positions.

The concept of statics and dynamics was explicitly formulated by the later generations only. Nevertheless, we can also see its idea in Steinitz’s theory. He believed the side with an advantage had to attack, otherwise risking losing the advantage.

The easiest example of this idea is the development advantage. If your pieces are better developed, you should hurry to exploit them until your opponent mobilizes their forces and equalizes the chances.

To understand why Steinitz’s approach to the game felt revolutionary, let’s see how one of his strongest contemporaries, Adolf Andersen, described the champions’ style: “Kolisch is a highwayman and points the pistol at your breast.

Steinitz is a pick-pocket; he steals a pawn and wins a game with it.” This style back then was considered to be intrinsic for cowards, nowadays is the most effective way of playing. Steinitz proved with his games, that it is often better to defend than to attack. You can learn Steinitz’s 10 Fundamental Chess Principles here.

Despite being known as an advocate of defensive measures, Wilhelm Steinitz initially was a fierce attacker. On his way to the World Champion title, Steinitz mostly played sparkling aggressive chess.

He could combine his positional understanding and attacking intentions to destroy the defenses of his opponents. To this day, these games remain great examples to learn from.

6. The King is a Fighting Piece

That is one of the concepts that only Steinitz is associated with. He believed the king was a strong piece not only in the endgames. He showed that it can defend itself well and didn’t need to always hide. 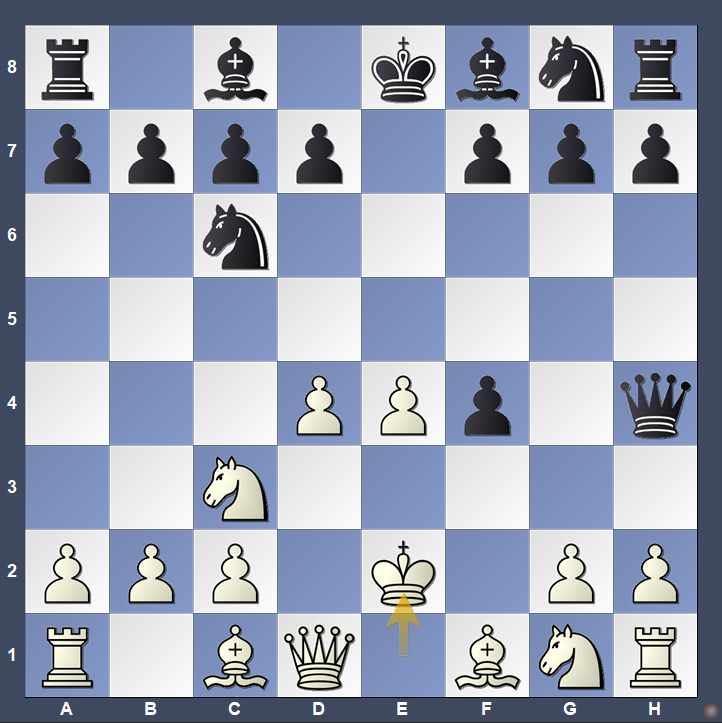 White’s king seems vulnerable, but Black is undeveloped and has no control over the center. White will also gain time by attacking Black’s queen with Nf3.

One of Steinitz’s games reached the following position: 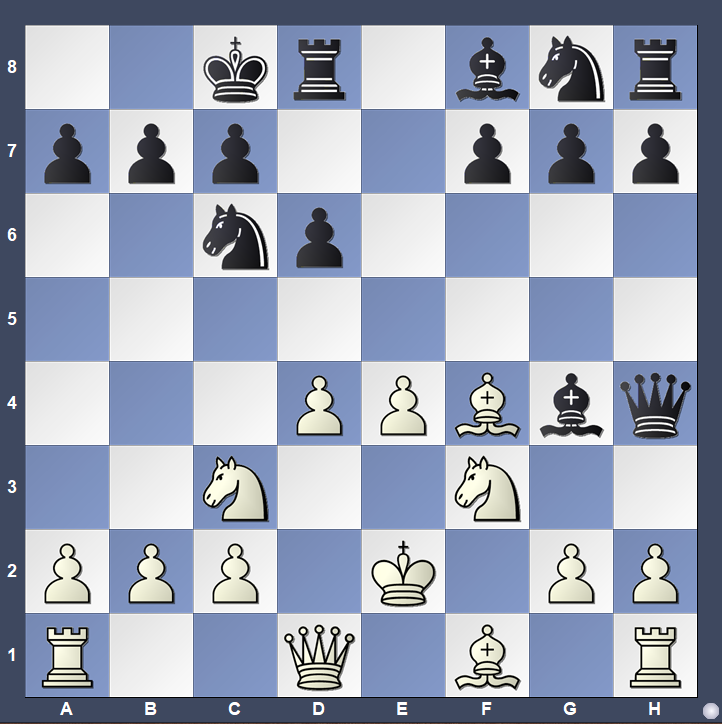 Can you believe that in this position, the first World Champion played 8.Ke3? Not only did he, but also the modern engines approve it! He went on to win an exciting game.

A similar attitude towards the king was seen in one of the games of the AlphaZero chess engine against Stockfish. 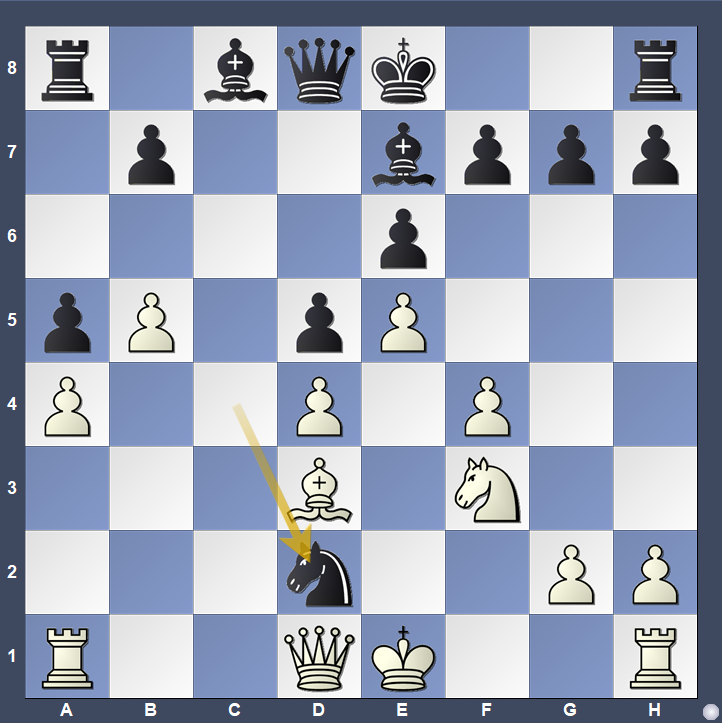 Black just captured a bishop on d2 with the knight. Taking back with the queen loses to …Bb4. But 16.Nxd2, followed by kingside castling seemed like a viable option. Nevertheless, the neural-network-based engine played 16.Kxd2! Bd7 17.Ke3! The board is full of pieces, but the king feels fine in the center. Moreover, after 17…b6, White continued aggressively with 18.g4. Steinitz would have been proud!

You can see how this brilliant game continued below. It actually started with the Steinitz Variation of the French Defense:

In Steinitz’s opening repertoire, you can find a lot of aggressive ideas as well as many safe and even passive defenses. That is not surprising: the first World Champion was good at both attacking and positional chess. That allowed him to adjust to his opponents better. It is known that he was thorough in preparation. He could analyze his future opponents’ games and prepare some opening ideas against them. Sometimes, such ideas would wait to be played for years.

The games of William Steinitz can be used for training calculation skills. His famous game against Curt von Bardeleben (Hastings, 1895) featured a brilliant combination. The main variation of the sacrifice from the game is about 13 moves long! We will not post this beauty here so that curious readers could find this game and challenge their calculation skills. That’s going to be great exercise!

Even after becoming the World Champion, Steinitz kept working on his chess. After every tournament, he analyzed the games of his rivals, trying to find not only their weaknesses but something new to learn. This way he kept improving his understanding of chess and, at some point, even switched to a positional way of playing.

Many things that we take for granted in chess today were not yet discovered in Steinitz’s times. One had to be open to new ideas and ways of approaching the game to be able to reassess the old dogmas. The first World Champion had a curious mind and kept experimenting.

Modern players can learn not only from their games but also from their attitude and constant search for the truth on the board.

Related Products
4.5 2 votes
Article Rating
Login
0 Comments
Inline Feedbacks
View all comments
Join the FREE Road to 2200 Masterclass (and learn how to Attack Like a Chess Master)
We value your privacy
Supercharge Your Chess in 21 Days!
Join Academy Today!