10 Things We Can All Learn from Anatoly Karpov 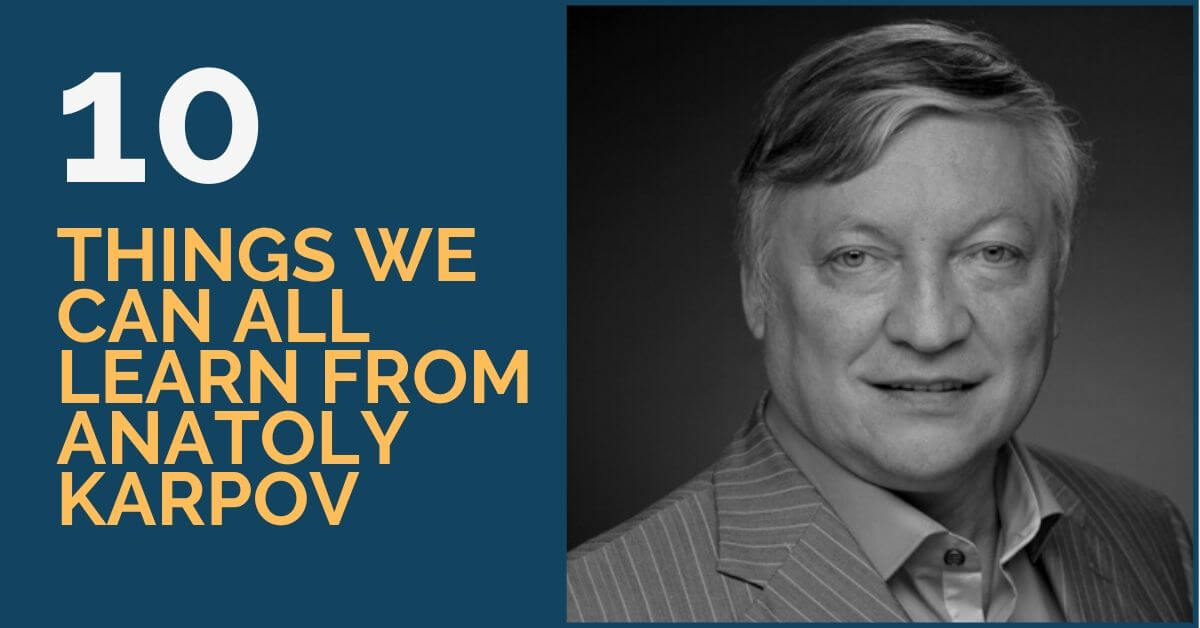 Studying the games of the classical players is a well-known way of training for the players who want to improve their strength and their overall chess understanding.

What better way to learn is there than from the very best?

Understanding their train of thought, their personality and their training routine can be a great source of inspiration for creating our own path to the top.

Former World Champion Anatoly Karpov is one of the important figures of our game, one from which we can learn a lot at any level. As most of the super-strong players, Karpov has a universal style, which means that there’s plenty to learn from his games, from the opening until the endgame.

However, there are a few things that he is most famous for:

The term prophylaxis refers to playing against your opponent’s ideas and taking a moment to restrict them before going on with your plans. This is something you can see throughout most of Karpov’s games; he is, in fact, famous for his uncomfortable style of play.

An important thing to be on the look for, this idea is closely linked to the prophylactic play described above. As you probably already know, it is ideal that you keep your opponent as tied up as possible in better positions, in other words not allow unnecessary counter-play from his side.

As difficult as you may find to do this in your own games, for Karpov it came almost natural. The feature that he is probably most well-known for is his boa-constrictor style of play, meaning that once he had even the slightest advantage, their opponents were doomed to a long, painful, defensive life. He rarely allowed counter-play and didn’t mind taking the time to stop any such ideas.

3. How to handle static positions

Perhaps some of the most difficult positions to play are the ones where you have to change nothing; no changes in the pawn structure, no new weaknesses, no unnecessary pawn moves – see the Hedgehog structure, for example.

Again, this is not something easy to do for the average player, but Karpov handled it in an exemplary manner.

4. How to play with the opposite-colored bishops

Karpov’s technique was impressive in any position, but he did wonders in positions with opposite-colored bishops.

From middlegames to complex endgames, he has plenty of games where he practically gives a masterclass on how to play in such positions.

Many slightly worse positions are in fact lost due to the creation of extra weaknesses. It is difficult for most players to stay passive for a long time and it is only natural to look for active moves.

But the problem with the “active” moves in bad positions is that they usually create more weaknesses than actual counter-play. As a player who could handle static positions without sweat, it is no wonder that this skill made Karpov also very good in worse positions.

Like many other strong players, Karpov was in no hurry to win the game when in a better position. Patience is an important skill in Grandmasters’ games and Karpov had plenty. He always took his time to slowly improve his position and build more pressure.

Karpov’s beautiful technique can also be seen in the maneuvers he found during the game. Always on the look to improve his pieces, he found creative, but very efficient ways to do so.

Karpov is also a player from whom you can learn how to handle different types of pawn structures. The Maroczy structure is one of them, but you can also find some very instructive games played against the isolated or the hanging pawns, for example.

In terms of openings, Karpov had his favorites and they were true to his style. Against 1.e4 he liked to employ the Caro-Kann, where he has brought a couple of important theoretical contributions.

Against 1.d4 one of his favorite systems was the Queen’s Indian – a safe and solid opening, which suited his style perfectly. He has left some very instructive games which can serve as inspiration for any aspiring chess player.