25 Chess Tactics All Players Must Know 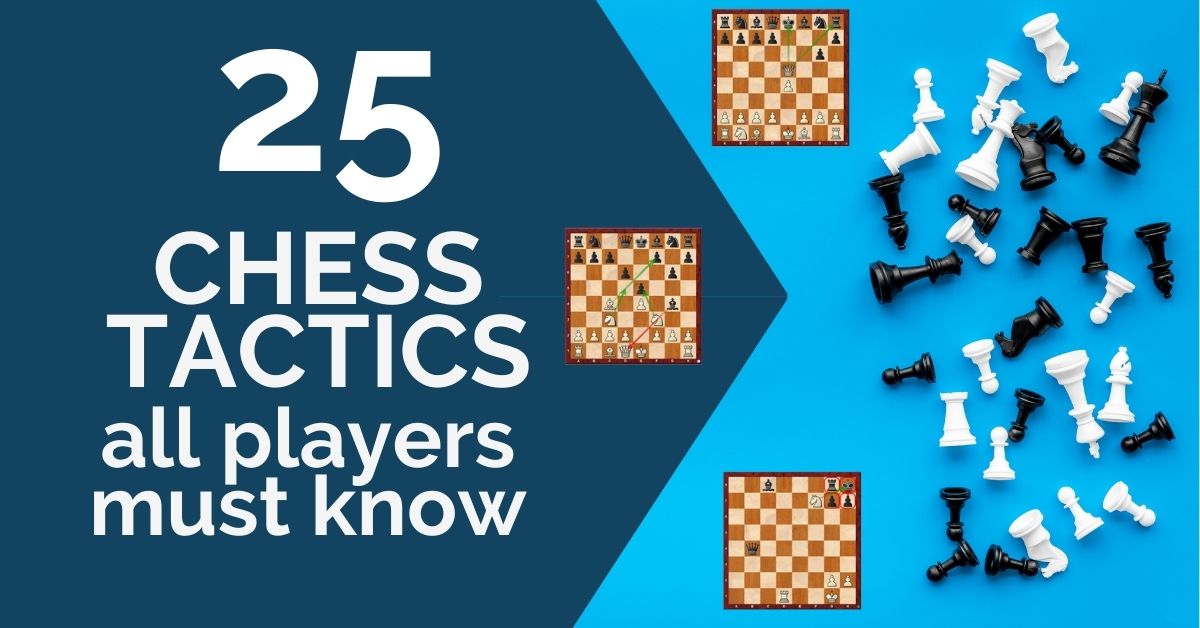 Famous chess master Richard Teichmann once said that “chess is 99% tactics”. Some players may disagree about the percentage, but no one would argue that chess tactics are essential. Better tactical vision allows players to see more possibilities, reduce the number of their own blunders, play beautifully, and overall score better.

In this article, we will examine the 25 most common chess tactics that every player has to know. Instead of giving only dry definitions, I illustrated each of them by examples and gave some practical opinions.

A fork is one of the most common chess tactics; it is a situation where one piece makes multiple threats. In the following position, the queen attacks Black’s king and rook at the same time: 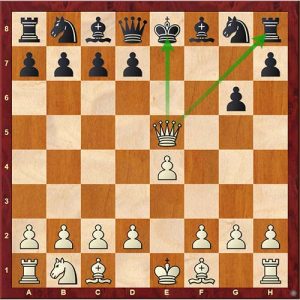 Knight is the most unpredictable piece on the chessboard and it makes knight forks a very dangerous weapon. Even strong players often blunder such tactics. 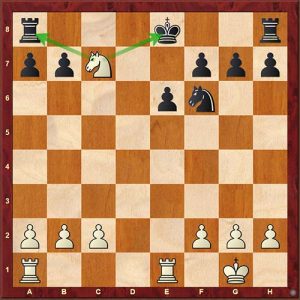 A pin is a situation when a movement of a piece would expose a stronger piece staying behind. That means that a pinned piece shouldn’t move. In the next position, Black’s knight is pinned by a bishop; White’s idea is to move Nd5 to put additional pressure and use the pin. 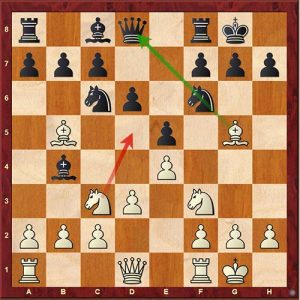 Sometimes one side can give some material up to achieve another kind of advantage. This is called sacrifice. 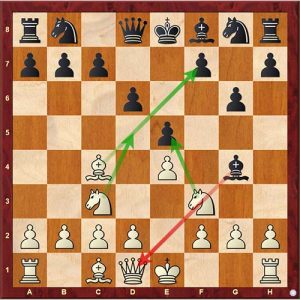 Here White can play 1.Nxe5, sacrificing a queen. After 1…Bxd1, Black’s king gets checkmated: 2.Bxf7+ Ke7 3.Nd5# This mating construction is called Légal Mate. Note that in the initial position, the knight was relatively pinned by Black’s bishop but because of checkmating ideas still moved.

When there’s a king behind a pinned piece, such a pin is called absolute. As you could see from the previous example, a relative pin can be broken if given a chance. It is not the case with an absolute pin. 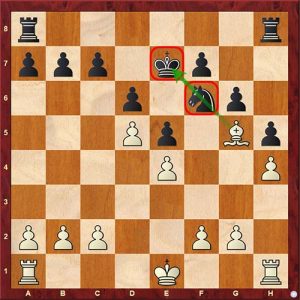 This tactic is sometimes called “reversed pin”, because here a more valuable piece stays in front of the less valuable one. 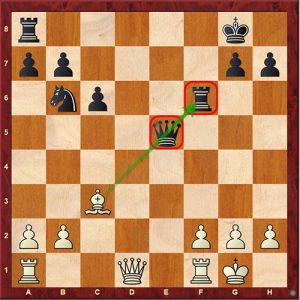 This is one of the most common chess tactics as well. Sometimes an enemy piece stops your plans; in such case, you can try to lure it by your other pieces. The clearest examples of decoy come from endgames: 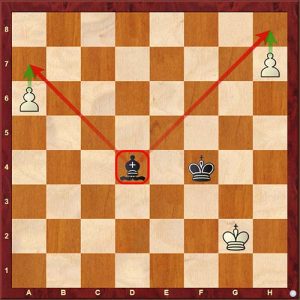 You can sacrifice one of your pawns to promote the other one.

In the next position, White’s rook can checkmate Black’s king because of the weakness of the back-rank. On the other hand, White’s king has an escape square on h2, which makes him absolutely safe against this kind of chess tactic.

In general, to defend against a check you can move the king, block or capture the piece that gives the check. Against a double check, the only way to defend is to move the king. It makes this kind of chess tactics very effective. 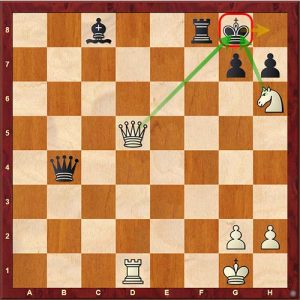 This chess tactic comes to help when you need your opponent’s piece to be on a certain square to achieve something. In the diagram above, after 1…Kh8, White checkmates in two. They start with 2.Qg8, attracting Black’s rook to the g8 square. 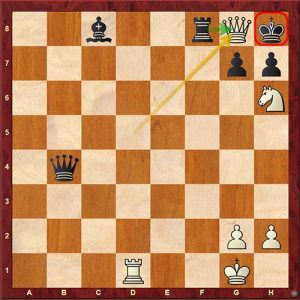 After capturing the queen, Black’s rook will take the only “available” square of the king. And after 3.Nf7 White checkmates! Such a tactic is called smothered mate. 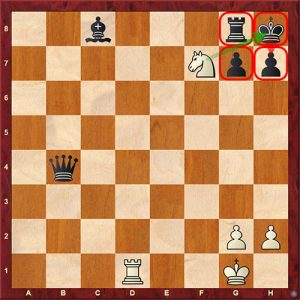 As you can see, to deliver a smothered mate, White used a double-check and attraction. Remember that sequence; it is a very common combination in chess.

This tactic is aimed to put the enemy king in an exposed position, often even by the cost of some material. In the next position, White can play the Cochrane Gambit, starting with 4.Nxf7. The idea of this crazy move is to force Black’s king to go towards the center and to attack it there. 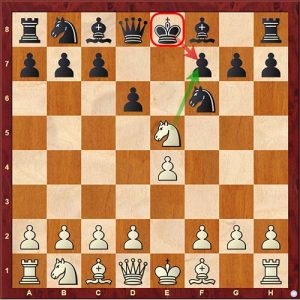 This is a certain case of king extraction and one of the most famous chess tactics. White sacrifices a bishop on h7 (or Black on h2 with colors reversed), after which usually the knight goes to g5, and the queen to h5 with unavoidable checkmate threats. 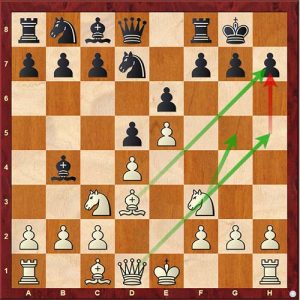 This chess tactic is similar to the Greek Gift and starts with Bxh7 as well. The difference is that here both bishops get sacrificed! The idea is to open up Black’s king and deliver a checkmate by opened g- and h-files. 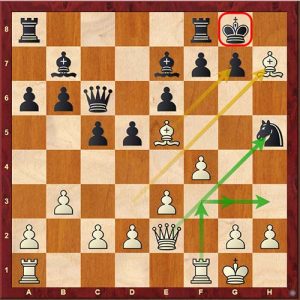 Instead of decoying a piece, you can also remove it. It works especially well when you can remove it with a check. In the next position, White can win a queen after 1.Bxc6+ and 2.Qxd4. 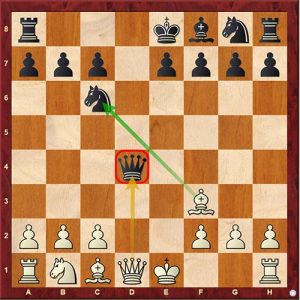 This chess tactic is often missed by beginners. Queens, rooks, and bishops can control squares even behind a piece if that piece is going to move. 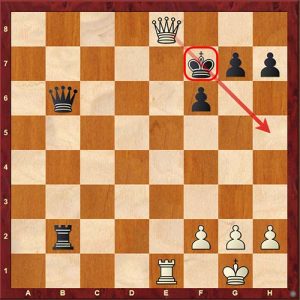 Even though the queen doesn’t control the g6 square at the moment, the king still can’t go there.

Sometimes a more valuable piece gets surrounded and attacked by less valuable pieces. In the next position, Black’s queen has no way to go and is trapped. Note that the rook from b1 X-Rays the squares behind the queen as well. 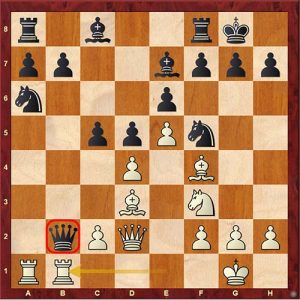 In the next position, any jump of the knight from f7 would lead to a check by the bishop from c4. 1.Nh6 would lead to a double-check, but the best would be to play 1.Nd6 and take the queen. 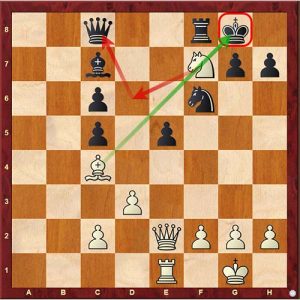 This is a very powerful chess tactic based on repeated discovered attacks. The most famous example of windmill comes from the game played between Carlos Torre Repetto against Emanuel Lasker, where the young Mexican sacrificed a queen to defeat the former World Champion. 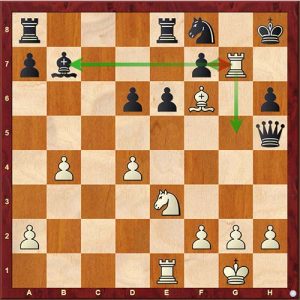 Instead of defending or moving your piece, you can counter-attack an opponent’s piece. In the next position, after 12.g5, Black can play 12…b4, counter-attacking White’s knight. 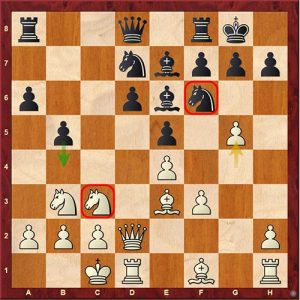 This weird word means “intermediate move”. It is inserting a check, threat, or capture in-between other moves. 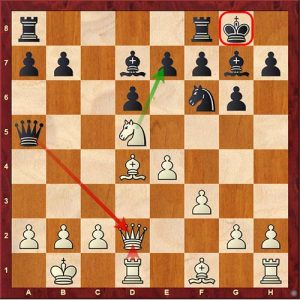 In this position, in the case of 1…Qxd2, White can first play 2.Nxe7+ and only then take the queen back.

It is Black to move in the next position, but any possible move would only worsen their position. Such a situation is called zugzwang. 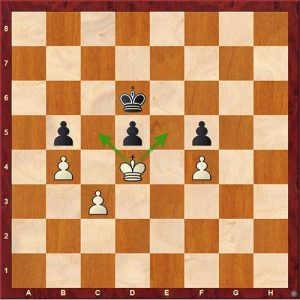 In this position, any Black’s move allows White’s king to penetrate and win the pawns.

It is important to understand that trades reduce not only your position’s potential but also your opponent’s. In the next position, Black’s rook would easily stop White’s passed pawn, but after 1.Rd8+ Rf8 2.Rxf8 Kxf8 3.a5, the pawn is unstoppable. 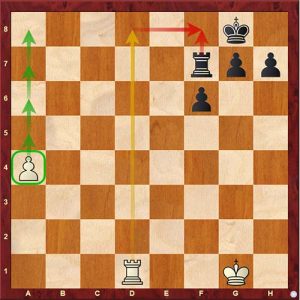 Tactics based on stalemate usually appear when there are few pieces on the board. The next example is pretty clear; with 1…Rd6! Black skewers White’s pieces and forces a stalemate after 2.Kxd6. 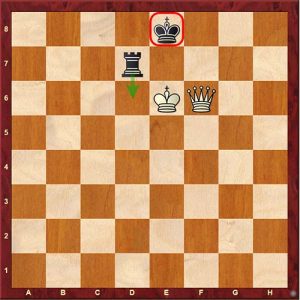 Let’s finish with one of the first chess tactics that everybody learns – linear mate. The concept is simple: one rook cuts the king off while the other one checkmates him. But sometimes it is still difficult to spot such an idea. 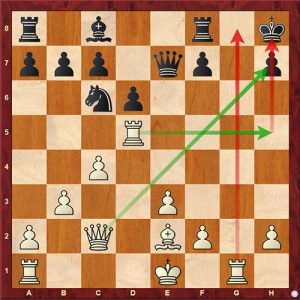 Now when you know what kind of chess tactics exist, it is going to be easier for you to find them in your games. But, of course, don’t forget to solve more puzzles for each of the mentioned tactics to train your pattern recognition.

Related Products
4.5 8 votes
Article Rating
Login
0 Comments
Inline Feedbacks
View all comments
Join the FREE Road to 2200 Masterclass (and learn how to Attack Like a Chess Master)
We value your privacy
Supercharge Your Chess in 21 Days!
Join Academy Today!