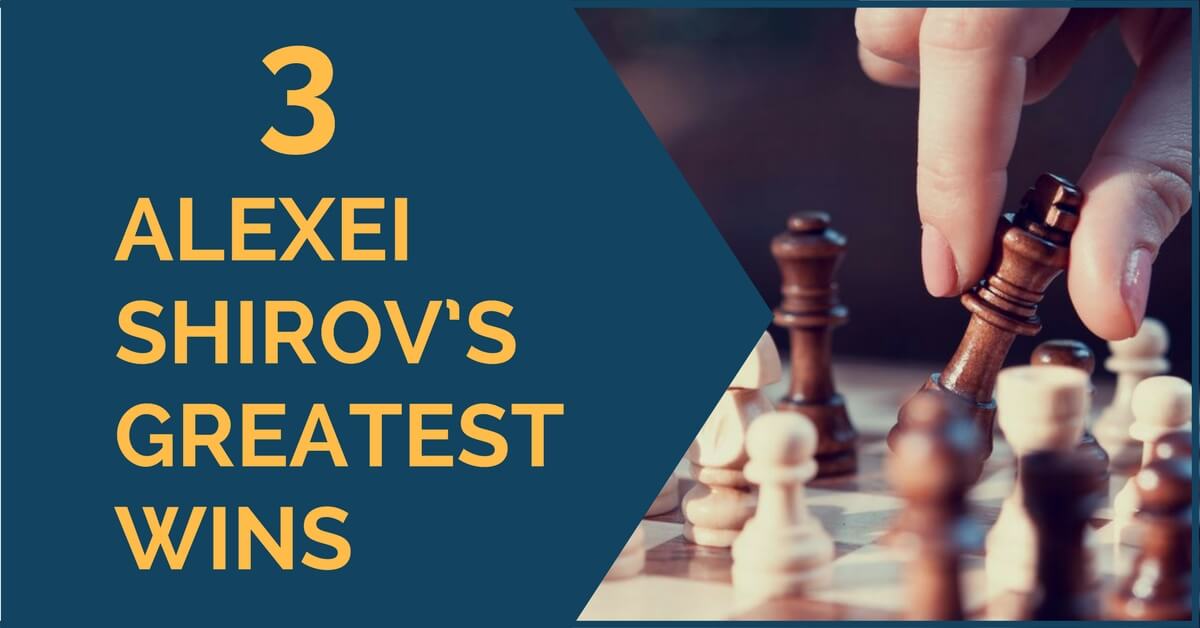 Alexei Shirov is one of the most imaginative and aggressive players of our times. Born in Riga, his playing style has been often compared to that of fellow Latvian and former World Champion Mikhail Tal. He has played many spectacular games and going through them can be a great way of training your own tactical and imaginative skills. We have only selected a few for this article, but if you’d like to see more, make sure to check out Shirov’s books “Fire On Board” that contain his best games, annotated by the Grandmaster himself.

Just to mention a few of his achievements to the day, Shirov became the world champion under 16 in 1988 and placed 2nd in the World Championship under 20 in 1990.

In the same year, he was granted the Grandmaster title and was ranked 2nd in the world in 1994. In 1998, while he was world number 4, he beat Vladimir Kramnik in a 10 games match that was meant to select the next challenger for Garry Kasparov. However, for financial reasons, the match never came through. In the year 2000 he reached the final of the FIDE World Championship, but he lost to former World Champion Vishwanathan Anand 3 ½ – ½. In 2007 he made it to the final of the World Cup where he lost to Gata Kamsky 2 ½ to 1 ½.

He reached his highest rating in 2008 (2755) and continues to be one of the strongest players of the world up to this day, delighting chess fans all over the globe with his original and sharp play. He is also a famous chess author who, besides writing the books mentioned above, has recorded many DVDs that contain original opening ideas and instructive games.

But, enough talking; let’s move on to facts! To show you some of Shirov’s over the board achievements, we have chosen three games that will get you familiar with his attacking style. However, don’t get us wrong; he is a complete player who masters all phases of the game.

We have chosen to start with one of the games played in the match against Kramnik in 1998, namely game 9. Having black against the Russian Grandmaster, he chose the Grunfeld Defense against white’s 1.d4.

As expected, the game quickly got sharp. White decided to delay his development in order to fight for the center, while black tried to prove his opponent wrong and punish this decision. It seemed like white was doing just fine, but a small imprecision allowed black a nice tactic that handed him the initiative.

Shirov didn’t waste it and went on to win the game in style.

The next game is a very famous win of Alexei Shirov with the white pieces against Veselin Topalov in one of the most prestigious chess festivals of all times, Wijk aan Zee. It was again “fire on board” right from the beginning, as Shirov used one his favorite lines against the Najdorf Sicilian, the Perenyi Attack. The arising positions are very sharp and any mistake can cost black dearly. Shirov won the game in only 24 moves, but a quick search in the database will reveal that Topalov was not his only “quick” victim in this variation.

To wrap things up, we decided to add a more recent game played in the traditional “Nutcracker” match – a match between two generations of top players. Shirov’s opponent was the talented Russian Grandmaster Vladislav Artemiev (with the black pieces). Although it was a rapid game, it is still very instructive to watch how, in a position with castles on the same side, white builds a dangerous attack on the H-file and achieves a much better position without any apparent mistake from black’s part.

It is difficult to choose between Shirov’s games, as he has many spectacular wins. However, we advise you to use the ones above as a starting point and continue the search by yourself. They are very instructive for any player who seeks to improve.

thanks alot sir you are the best as usual