3 Things to Learn from Anatoly Karpov 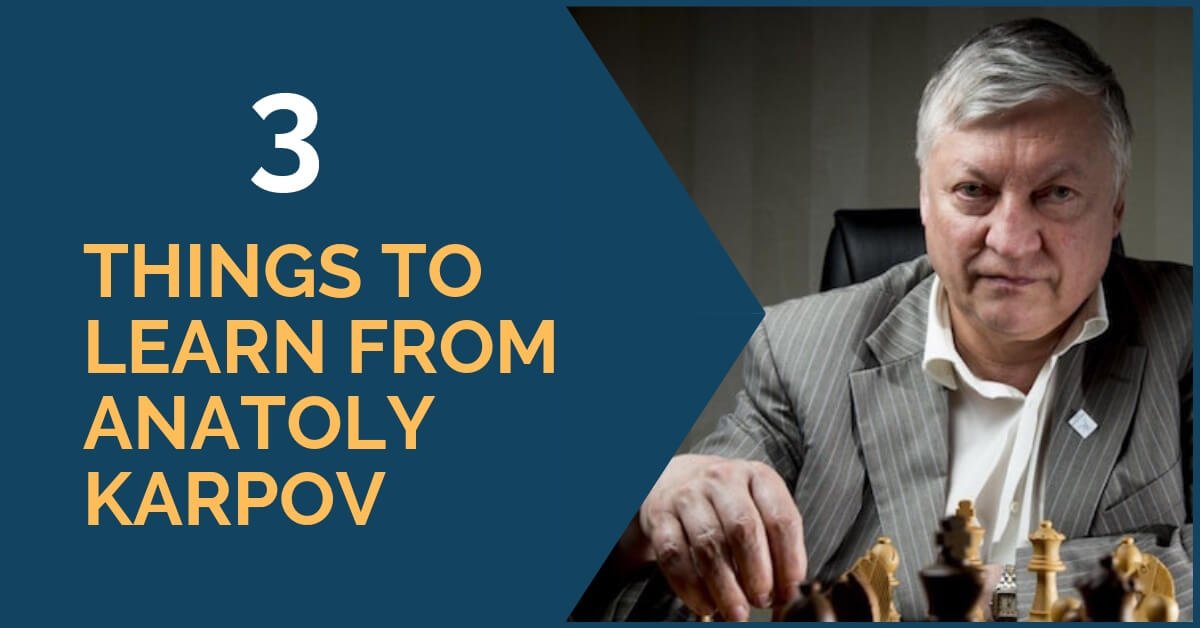 Improving at chess takes a lot of hard work and determination. You must study a lot, solve many exercises and memorize openings. This may sound boring, but it doesn’t have to be like that. You have to keep yourself entertained, so to speak, in order to keep your focus and interest in what you are doing.

A good way of changing the routine and learn something new or simply consolidate the information you have been accumulating over your training sessions is to see games of the strong players, especially those of the classics’.

This method never goes out of fashion and it most definitely helps you improve your over-all chess understanding. If there are so many strong Grandmasters talking about it and saying how much it has helped them improve, why shouldn’t it work for you? Just pay attention to the commentaries and explanations or try to understand the moves by yourself.

I, for one, have always been fascinated with the classical players’ technique in better positions. You don’t see them rushing to win the game and get it over with; they enjoy it.

They play it with care and calm. They give no chance to their opponent and are merciless. It’s never easy to play a worse position and they know it. It’s not only a positional advantage anymore; there’s also a psychological battle. An opponent who is forced to defend and find good (and sometimes only) moves in order not to slip into a completely lost position is likely to eventually go wrong if the pressure is long enough. One of the players who is most famous for his boa-constrictor style and his ability to keep his opponent passive and give him no chance of counterplay whatsoever is Anatoly Karpov.

The following game is a clear example of this:

Another great skill of Karpov’s is his ability to handle static positions. These type of positions are difficult to play for many players, as they usually involve “doing nothing”. We are talking about those positions where you have to wait patiently and make moves that do not change the character of the position and do not create any weaknesses.

Generally, the side who makes the first move risks getting into a worse position. A clear example is positioned that arise from the Hedgehog variation of the Sicilian Opening where both sides prepare their typical ruptures but have to execute them at the right moment. It looks like white has more space, but if he hurries with the attack he risks to over-extend and gives black targets of attack.

In the following game, Karpov exploits exactly this:

Lastly, probably one of Karpov’s most famous skills is the way he handled positions with opposite colored bishops. It’s very instructive to watch his technique, not only in the middlegame but also in endgames.

If you want to learn how to play in positions with opposite colored bishops, then his games are definitely the point of start. A very important rule in such positions is that the side who has the initiative holds the advantage. This is very clear in his games – you can see how he is constantly looking for new weaknesses and trying to open the opponent’s king position.

As he was well-known for his ability to use this feature to his advantage in middlegames, many of his opponents were going for trades in order to reach an opposite-colored bishop endgame, generally known as drawn. However, this was not always the case with Karpov, as he always found ways to put pressure on his opponents and make their life difficult even in the endgame.

In the following game you can see Karpov’s great technique in the middlegame: