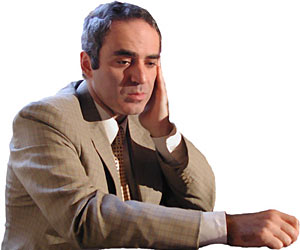 Mr. Kasparov needs no introduction. He was ranked world’s number one for 225 out of 228 months from 1986 to his retirement from chess in 2005. Kasparov holds a record of 15 consecutive professional tournament victories and 11 chess Oscars! He became a youngest ever world champion at the age of 22, defeating Anatoly Karpov.

Kasparov held the title for 15 years! We present a list of quotes by the greatest chess player of all time Garry Kasparov.

This is the essential element that cannot be measured by any analysis or device, and I believe it’s at the heart of success in all things: the power of intuition and the ability to harness and use it like a master.

Nowadays games immediately appear on the Internet and thus the life of novelties is measured in hours. Modern professionals do not have the right to be forgetful – it is ‘life threatening’.

Any experienced player knows how a change in the character of the play influences your psychological mood.

By the time a player becomes a Grandmaster, almost all of his training time is dedicated to work on this first phase. The opening is the only phase that holds out the potential for true creativity and doing something entirely new.

When your house is on fire, you can’t be bothered with the neighbors. Or, as we say in chess, if your King is under attack, don’t worry about losing a pawn on the queen side.

Attackers may sometimes regret bad moves, but it is much worse to forever regret an opportunity you allowed to pass you by.

By strictly observing Botvinnik’s rule regarding the thorough analysis of one’s own games, with the years I have come to realize that this provides the foundation for the continuos development of chess mastery.

The best chess masters of every epoch have been closely linked with the values of the society in which they lived and worked. All the changes of a cultural, political, and psychological background are reflected in the style and ideas of their play.

I see my own style as being a symbiosis of the styles of Alekhine, Tal and Fischer. 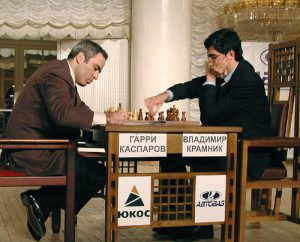 In general there is something puzzling about the fact that the most renowned figures in chess – Morphy, Pillsbury, Capablanca and Fischer – were born in America.

Who else in chess history has won so many serious games with the help of brilliant tactical strokes? – (on Alekhine)

When I was preparing for one term’s work in the Botvinnik school I had to spend a lot of time on king and pawn endings. So when I came to a tricky position in my own games I knew the winning method.

Excelling at chess has long been considered a symbol of more general intelligence. That is an incorrect assumption in my view, as pleasant as it might be.

Brute-force programs play the best chess, so why bother with anything else? Why waste time and money experimenting with new and innovative ideas when we already know what works? Such thinking should horrify anyone worthy of the name of scientist, but it seems, tragically, to be the norm. Our best minds have gone into financial engineering instead of real engineering, with catastrophic results for both sectors.

Winning is not a secret that belongs to a very few, winning is something that we can learn by studying ourselves, studying the environment and making ourselves ready for any challenge that is in front of us.

Chess continues to advance over time, so the players of the future will inevitably surpass me in the quality of their play, assuming the rules and regulations allow them to play serious chess. But it will likely be a long time before anyone spends 20 consecutive years as number, one as I did.

I have found that after 1.d4 there are more opportunities for richer play. 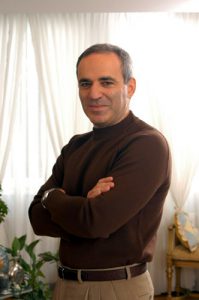 The highest art of the chessplayer lies in not allowing your opponent to show you what he can do.

The stock market and the gridiron and the battlefield aren’t as tidy as the chessboard, but in all of them, a single, simple rule holds true: make good decisions and you’ll succeed; make bad ones and you’ll fail.

Tactics involve calculations that can tax the human brain, but when you boil them down, they are actually the simplest part of chess and are almost trivial compared to strategy.

For me, chess is a language, and if it’s not my native tongue, it is one I learned via the immersion method at a young age.

I’ve seen – both in myself and my competitors – how satisfaction can lead to a lack of vigilance, then to mistakes and missed opportunities.

Few things are as psychologically brutal as chess. 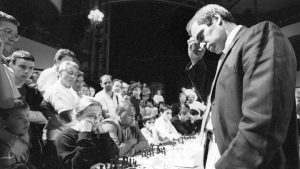 Nervous energy is the ammunition we take into any mental battle. If you don’t have enough of it, your concentration will fade. If you have a surplus, the results will explode.

The biggest problem I see among people who want to excel in chess – and in business and in life in general – is not trusting their instincts enough.

If you wish to succeed, you must brave the risk of failure.

Vishy is a brilliant player. But it is very difficult to compete at 40. He is up against people half his age. I will be surprised if he can go on any longer. He can fight against anyone but time.

Check out our store:

Images of Kasparov are from chesspro.ru and wikipedia.org

Gary Sacco, Fischer is definitely a great chess player, but we would never know what would happen if he agreed to play that Match against Karpov…

Garry Kasparov is arguably the Greatest Player of all time. He is always compared to Fischer in natural ability, and I believe that either player can be considered as the greatest player. Garry’s hold on the Title and his longevity as the worlds top player and 11 Oscars do give him a formidable edge. At least in my opinion they do, and I would be very sure that most will agree. If they don’t,and they prefer Fischer, that’s fine too because both of these men have left their mark on the game of chess for all us to enjoy and learn from.

This is great lesson from Garry Kasparov sir,its really help for next. Thanks and delighted to this article or lesson.