6 Things to Remember When Having a Winning Position 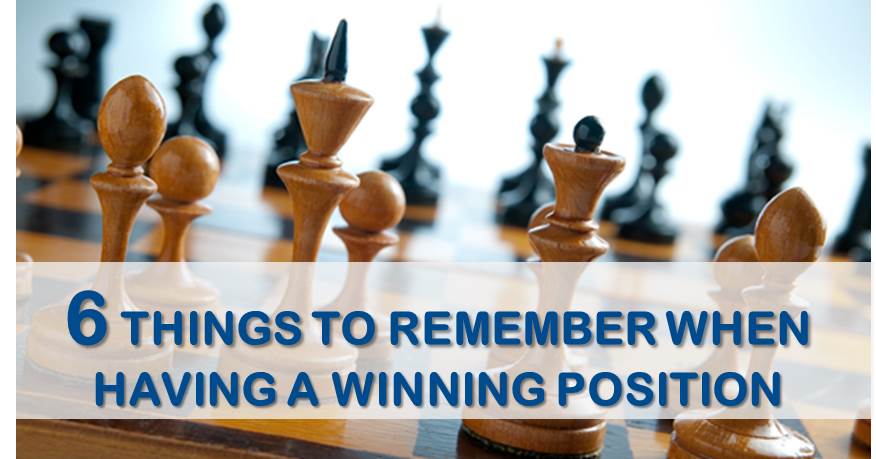 Winning what is already won is one of the key elements to consolidate certain strength at chess. How many times have you heard chess players go out of a game saying “I was totally winning.. and I drew/lost” ?Or better yet, how many times have you said the same phrase? It is not a good feeling when this happens; most of the times you got no one to blame but yourself.

However, it is normal and it happens to every chess player at some stage, until they get better and this starts happening less and less. The good thing is that you can train yourself to avoid ruining decisive advantages. In this article we will share some thoughts on this matter.

There are certain points that one needs to remember when having a winning position.

1. Don’t Relax! – This is the first one, and it is crucial. Very often it happens that when you think you’re winning you become more relaxed. Your opponent, under pressure, is on guard and will NOT let escape any opportunity of counter attacking you. So, it’s best to keep totally focused and in tension and think “the job is almost done but not yet”.

2. Senza fretta! – I like to remember this concept as I learned it. “Senza fretta” is Italian for “no hurry”. This is, in my opinion, the second most important advice. If you are in charge, take your time. Improve your position slowly, make plans; it doesn’t matter if it takes many moves to achieve your goal. Don’t gamble it or get distracted by your opponent’s invitations to complicated lines.

3. Don’t be afraid! The side having the advantage must attack or he risks losing it. There are situations when the only way to keep your advantage is by entering sharp positions. You should not avoid this. After all, if you had an advantage is very likely that there will be favorable lines for you to find.

4. Limit your opponent’s counterplay! This you should do anytime you can but it is especially important during the endgame when you’re trying to convert your advantage into a full point. Keep in mind your opponent’s ideas.

5. Second weakness! Don’t forget this one! Highly important. Once you have gained an advantage, material or positional, put it aside and see if you can collect another one. It will make your opponent’s task much more difficult. If you’re a pawn up, now look for a better minor piece or create an attack on his king. This is very useful, so keep it in mind!

6. Never expect your opponent to resign! This one doesn’t need any explanation. You have to keep fighting and be on guard all the time. 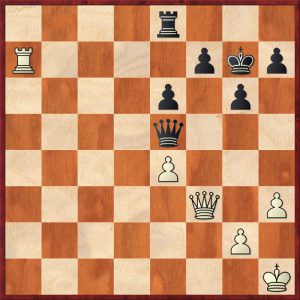 It is time now to examine some positions in which one side has a large advantage and failed to win. I have decided to select games from my own practice. It is easier this way to be more critical and honest about what happened during those games. Let’s see the first position: 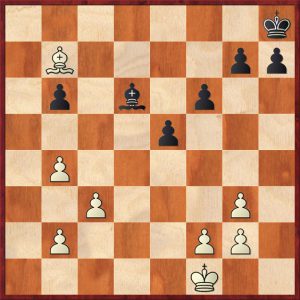 After a complex battle in the middlegame where white’s chances were preferable I had emerged with a decisive advantage in the endgame. I thought the win was easy and that my opponent was just making his last moves before resigning. I still can’t believe this point didn’t go home with me.

Here we have a better endgame for white due to the extra pawn and the possibility of creating two connected pawns on the queenside. However, the presence of opposite color bishops gives black some hope to obtain a draw. I expected a resignation by the time I manage to play c4-c5, I relaxed and thought: “anything wins”. Obviously not, never! 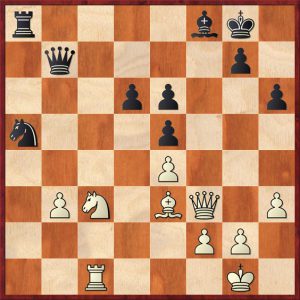 This is not a technical endgame but I wanted to bring this position up to show how you should be ambitious, not conservative, when you have the advantage. In the position above white can win a pawn, either h6 or e6, by playing Qg4. Black will regain his material by picking up the white pawn on b3 but of course, either h6 or e6 are of much more positional value.

I played 30.Qg4 to which my opponent responded with 30…Qxb3 then I took 31.Bxh6 and black played 31…Kh7 Here I immediately moved back my bishop, thinking “I should be slightly better after weakening his king”. You have to be more ambitious, always hungry and never afraid of looking for possible complex solutions to any position.

A 5 min thought in that position after 31…Kh7 and I would have definitely found the winning combination. I wasn’t afraid, I just dismissed that there would be any tactical shots and settled for a lot less. Can you spot it? If not, see the details here:

We hope you have enjoyed and learned something out of this article. Materializing the advantage is one of the skills every player, no matter what level he is, always tries to improve. Analyzing your games and identifying what you’re doing wrong is a very effective way to deal with this matter.

Thanks to all for reading and feel free to leave any feedback.