7 Reasons Why Magnus Carlsen Plays Better Chess Than You 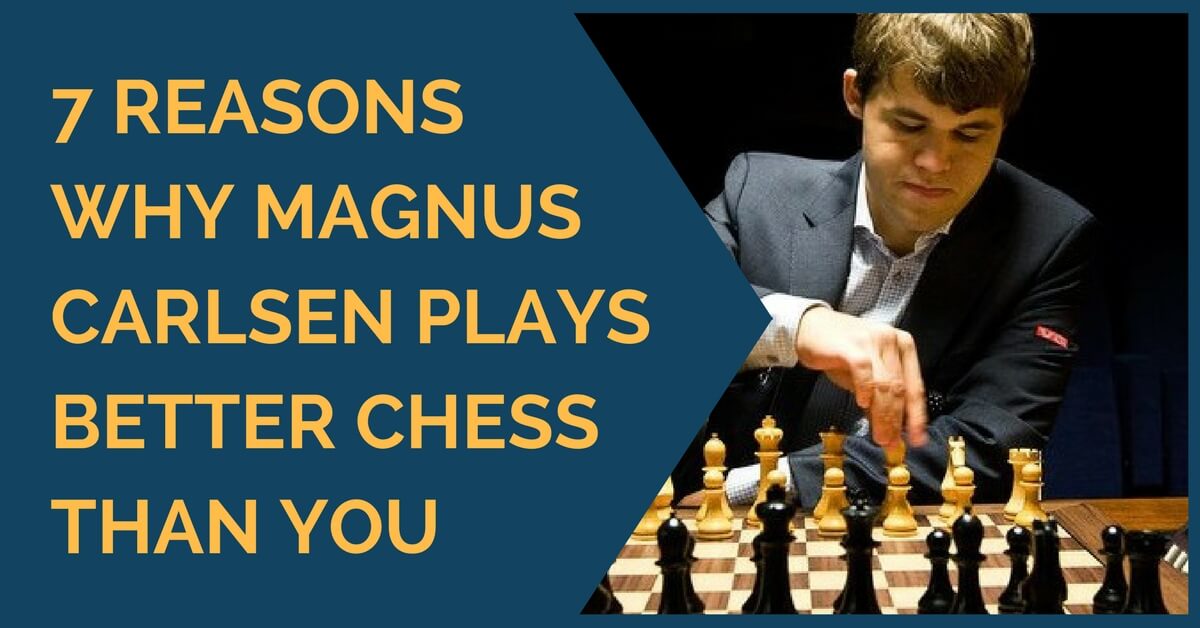 In this article, we will try to understand what is truly important for becoming a great chess player and what can be ignored.

While we all understand what intelligence means, there is no precise definition of this concept. It includes many things such as logic, abstract thinking, understanding, learning and a dozen more components. Since a game of chess isn’t a basketball or boxing, a big part of it has to do with a player’s mental ability. In order to make good moves, calculate long variations, come up with a right plan, be creative over the board and even to learn an opening theory – high intelligence is required.

Generally speaking, a person who is ranked number one in FIDE list (aka Magnus Carlsen) must possess some special brain powers. I don’t like putting human’s brain ability in numbers, since it’s literally limitless, but it should be noted that IQs of the great chess players is among the highest in the chart. You can read about the correlation of IQ and ELO rating here in more detail.

is very important for the game of chess. If we look at Magnus Carlsen, who is called Mozart of Chess nowadays, he possesses something called ‘photographic memory’. When Magnus was 7 years old he was able to memorize all counties in the world along with their capitals as well as all the streets in his hometown. You may ask me why knowing street names and capitals is important for the game of chess?

Well, it’s not. But, Carlsen also uses his exceptional memory skills to memorize chess patterns, classical games and endgame themes. In one of the recent interviews he stated that he remembers a few hundred classical chess games of the Great Ones. While a good memory may not be an absolutely essential trait for playing chess, it was noticed that most (if not all) elite chess players have exceptional memorization abilities.

It’s not enough to have a photographic memory and score high on the IQ tests to be a great or even a good chess player. Chess is a game of skill that can be learned and improved. High level of intelligence and a good memory are just supplements to training. Without proper chess training, a person with IQ 120 (average Joe) would crash someone with IQ 165 (world class scientist).

It is not possible to learn chess quickly. Hours and hours of training should be dedicated to understanding fundamentals of the game, openings basics and endgames principles. One’s brain needs time to adapt for finding chess tactics and mating combinations like its second nature. According to many studies it takes about 10 years of systematic work for becoming a chess grandmaster. Magnus Carlsen was one of the youngest grandmasters ever at 13 years and 148 days. He started playing chess at age of 5, so it took Carlsen 8 years to achieve the highest chess title.

That doesn’t mean, however, that if an average person would spend 10,000 hours on chess he will become a GM. Majority of people will never even reach the Master’s level (~2200 ELO). It all depends on one’s abilities, paired with right sort of training and hard work.

In order to be good at something, a proper motivation is needed. Chess is no exception. Magnus Carlsen claims that he truly loves the game and enjoys every second of it. This is different from many grandmasters that take chess tournaments as routine work and agree for quick 10 move draws. It explains why Carlsen doesn’t like to settle for a draw even in a dead equal position. He is motivated to win. “He who cares wins” – says Nigel Short.

It’s not a secret that playing high level chess is a very demanding activity. As Fischer states it: “Your body has to be in top condition. Your chess deteriorates as your body does.” Many top level chess players including Magnus Carlsen work on their physical fitness. He plays soccer and tennis to help keeping his body ready for the next 6 hour chess battle.

Ability to concentrate or focus all of the mental energy to a single point on the chess board is extremely valuable trait for a chess player.

Alekhine states that “One trait more than any other determines one’s strength at chess: unshakable concentration, which has to cut a player off completely from the outside world.”

When a good chess player plays over the board nothing should distract his attention: neither the noise, nor the opponents, nor the spectators.

Things like self-confidence, ability to overcome loses and ability to learn from your own mistakes are also very important for a successful chess player. Magnus Carlsen possesses all of these traits. Once he loses a game (which does not happen very often recently), he comes back for the next round, hungry to win, and just crashes his opponent in 20-30 moves.

Carlsen definitely possesses high level of self-confidence. Just before his World Championship Match with Anand he gave an interview to Norwegian News-in-English website where he said “I expect to win every tournament I play”. We will soon know the outcome.

As you can see chess is a very complex game. Many components need to click together for a chess player in order to be a great one. Yes, there are may be many people on Earth who possess a higher IQ than Carlsen, or a better physical fitness level, or a better concentration ability and a higher motivation level. Nevertheless, Carlsen seems to have the best combination of these 7 grandmaster traits (and maybe a few dozens more not mentioned here) that decide a success of a chess player. That’s why he is #1.

Ready to start winning games like Magnus Carlsen? Check out our store and articles:

2. Characteristics of a Chess Genius

Thanks for your comment, John. Do you mind sharing a source?

your very biaest on this carlsen guy bobby fischer beat another GM in 17 moves when has carlsen done something like that.

The article states an IQ of 120 being average Joe. Ummmm I don’t think so, 120 is considered above average and in the superior range of intelligence.

i have printed all of carlsen’s play and i studied it 15 hours a day,,, and this post will help me a lot…

wowwwww! what a good trait example from the world champion a moral boosting indeed…so inspirational but the truth is honestly, i cannot all combine this characters all int0 one it’s really for exceptional person like carlsen were we could found it.

Who is this guy anyway? 😮

Thank you very much! This is a great post, it will help me a lot.

That what I was referring to when I wrote:

[i]Yes, there are may be many people on Earth who possess a higher IQ than Carlsen, or a [b]better physical fitness level[/b], or a better concentration ability and a higher motivation level.[/i]

Of course, he is from your homeland! I will be looking forward to great, high level chess games. Personally, I’m neutral and don’t have a favorite here.

[quote name=”Mrinal Kakati”]As an Indian, I desperately want Visy Anand to win the world title against Carlsen. But as a chess lover, I hope that best will win and want to see some best chess game between two chess genius.[/quote]

As an Indian, I desperately want Visy Anand to win the world title against Carlsen. But as a chess lover, I hope that best will win and want to see some best chess game between two chess genius.

[quote name=”Clarie”]I will be rooting for Magnus in Carlsen vs. Anand match. He is my favorite chess player.[/quote]

I hope Anand will win the Match! It would make me sooooo happy! ! ! 😆

I will be rooting for Magnus in Carlsen vs. Anand match. He is my favorite chess player.

I’m stronger than Mr.Carlsen. Not at chess, but at fitness!