Losing a Game: 7 Things Chess Players Say After That 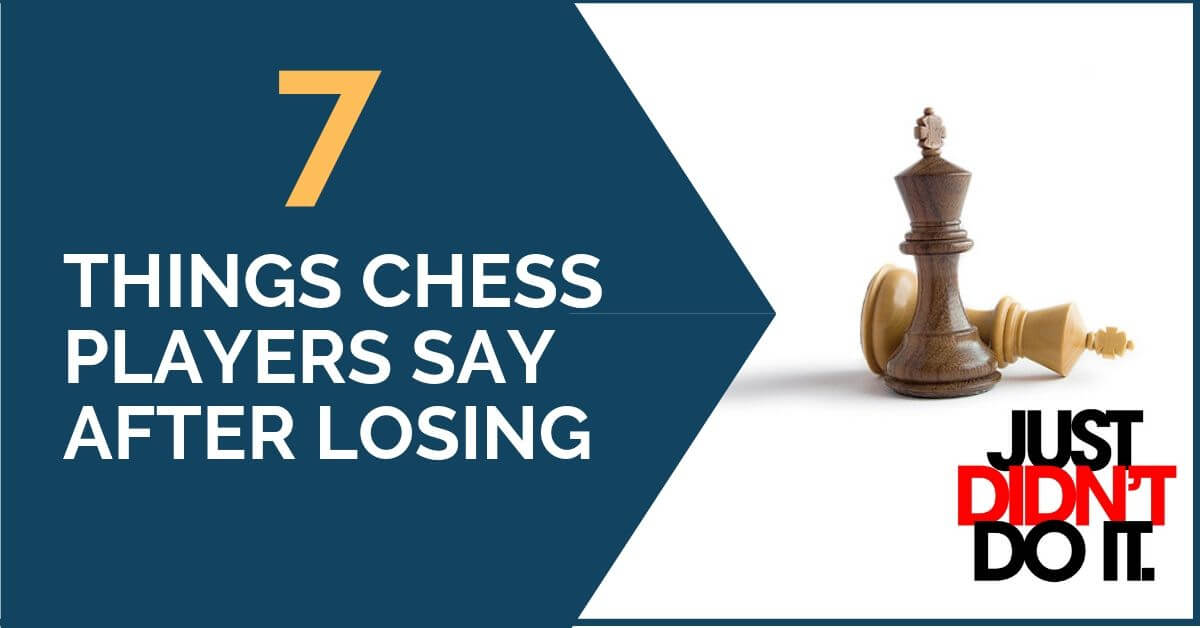 Chess stands somewhere between art, sports, and science, universes where a chess player can drift away from the real world for as long as he wants. The chess world is full of unique stories. Every player has hundreds of anecdotes with things that have happened during tournament trips, chess training, games, foreign countries, etc.

It is no wonder they say that chess players are very ‘’special people’’, characters. However, there is one thing that most chess players do have in common. Nobody likes to lose and when they do, they always have one well-prepared repertoire of excuses and reasons to justify the defeat.

In this article and writing from our own experience, we are going to name seven of the most common excuses we have heard. And, even used ourselves to make the loss a bit less painful on ourselves.

1. ‘’I just blundered’’ – This is far too common. Very often, chess players blame their entire defeat on one single moment. I did not see what they say. Sometimes (a few actually) this is actually true. But, it does very little for your own improvement to fool your mind thinking that that is all that happened. There are causes why you missed a move and it is your task to seek deep within yourself if you do not want to fall for the same mistake again.

2. ‘’I was winning but..’’ – In chess, as in any other sport, winning does not mean it’s WON. Many times, we are not 100% honest with ourselves to give our position the respect it deserves. When this sort of excuse is told, very often the case is of a position that is actually winning but it is not easy and there are still technical problems to sort out.

3. Losing a Game: ‘’I forgot my preparation’’ – One personal favorite. It is the perfect way to say that you were supposed to know something but do not know it. It could also mean that you have your homework done and it is on your computer at home but not where it matters, your brain.

4. ‘’I forced it when it was a draw’’– Almost like admitting to losing on purpose. Basically decided the game by taking a chance his opponent does not find a move, like flipping a coin and letting fate decide. Honestly, this works sometimes but it is not a strategy that we advise [this is the RIGHT strategy]. If it is a draw wrap it up and think about the next game.

5. Losing a Game: ‘’My opponent offered a draw and I declined’’ – A reverse way of excuse number 4. It’s like taking 0 responsibility for the outcome of the game and laying it all in that brave moment when you declined your opponent’s draw offer.

6. ‘’I was low on time’’ – Time matters! It’s just part of the game. Nowadays when we have an increment in every tournament losing on time is unacceptable. True that being low on time leads to mistakes but instead of using it as an excuse you should work on improving your time management.

7. ‘’Food poison’’– Yeah, sometimes poor nutrition can make you play horrible. And, other times telling your opponent you are sick is one fine way to justify what horrible moves you just played over the board! A similar excuse is lack of sleep or any physical discomfort.

Looking for more on this topic? We recommend reviewing this article.

Also, here is a post on The “Good” Bad Bishop.

If you have played chess for a long time, there is a big chance you feel familiar with the situations described in this article.

Our idea is to motivate you to reflect more on the real cause of your losses rather than fool your mind with superficial assessments.

We hope you enjoyed reading this article. And, if you have more excuses to add please do not hesitate to comment!

How about simply saying :”Well played”