7 Things to Know to be a Strong Attacker 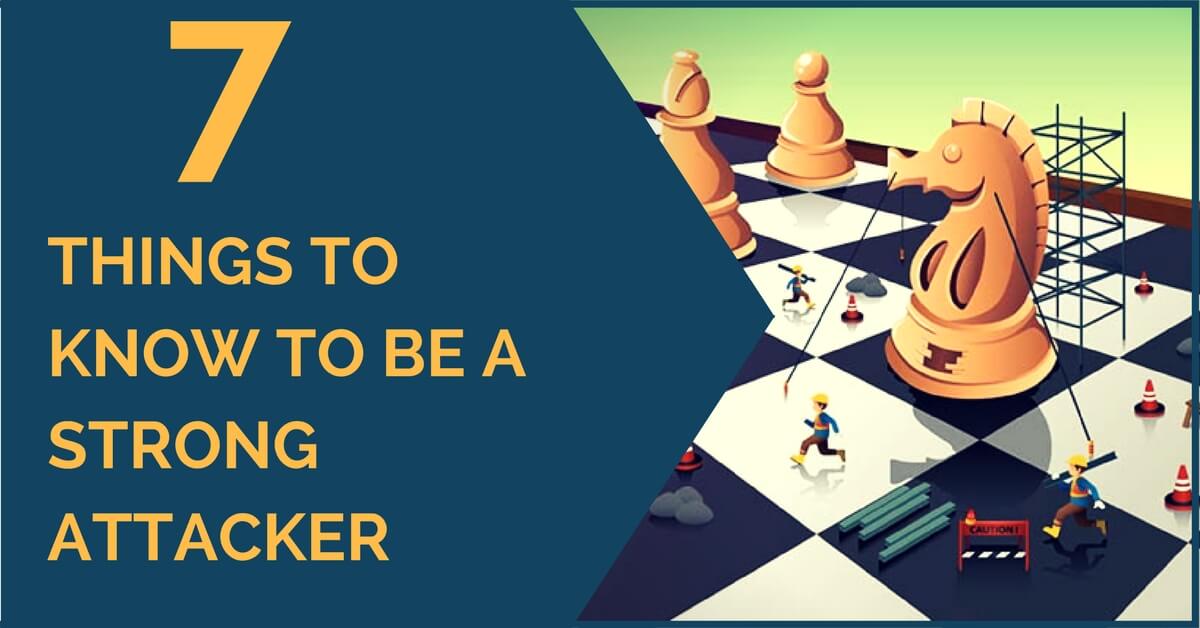 Everybody likes to see a good attacking game and would love to be able to reproduce it in their games, but it is not always that easy.

You have to know how to make your pieces cooperate and seize the right moment to start the pawn avalanche.

In this article, we are going to give you some tips that will help you improve your aggressive side.

The first thing to know when attacking is that no attack will work if your pieces aren’t harmoniously cooperating with each other. Also, you can’t attack with only a bunch of pieces; you will most likely need as many back-ups as possible in your attack. All this means only one thing – that you must first completely finish the development and place your pieces on ideal squares before launching yourself in an attack.

You may also read, what to do before starting an attack.

Closely linked to the idea above, we could say that an attack that is not backed by pieces will most likely fail. Before deciding to make a pawn move when attacking ask yourself if all your pieces are placed in good squares. If the answer is no, then first improve them and only afterward decide how you will start the pawn storm. Remember – pawn moves are definitive and, if they are not backed by pieces, they can turn into weaknesses and give your opponent a target of attack.

It feels great to conduct an attack on any side of the board, but if your opponent’s pawn structure is intact it will most likely be difficult to succeed. In such cases, it is important to first provoke some pawn moves that will give you a target of attack. You can do this by organizing pressure with your pieces or place your pieces on squares that will annoy your opponent, thus provoking him to chase them away and create a weakness in his camp.

Tactics is essential in every aggressive game and this is why you have to solve as many puzzles as possible. They will help you develop your tactical vision and rapidly see any tactical motifs existent in the position. It is very important to know all the basic sacrifices and to be able to combine different ideas during the game.

Momentum – another very important notion for the attacking player. It can also be looked at as initiative; you have to constantly keep your opponent under pressure and give him no chances to “breath”. Build your attack little by little, but with threats. Moves with tempo are the key to building a strong attack; you are improving your position while your opponent is forced to constantly defend.

One thing that will often indicate where to attack and if to attack at all is the pawn structure. Pawn chains will show you on which flank to take actions, while the type of center will tell you if it is safe to attack or not. For example, a chain like f3-e4-d5 indicates that the attack should be started on the queenside. One of the c2-d3-e4 type tells you that you can start an attack on the kingside. On the other hand, an open center or one where your opponent has central ruptures available indicates that you should be careful with opening your king too much or over-extending.

Many could say that intuition is not really related to the game of chess, but we could argue that it is developed by seeing many attacking games and solving many puzzles and studies. True, some already have it in their blood, and Tal is the greatest example here. However, the point is that not everything can always be calculated and assessed until the end and intuition play a major role in deciding whether to enter a variation or not.

Also study Alpha Zero Attacking Games against StockFish 8 during 2018!
Crazy attacks and awesome pawns sacrifices (sometimes till 3 or 4 pawns down) and still get a deadly attacks!