9 Reasons Why You Are Not Improving at Chess 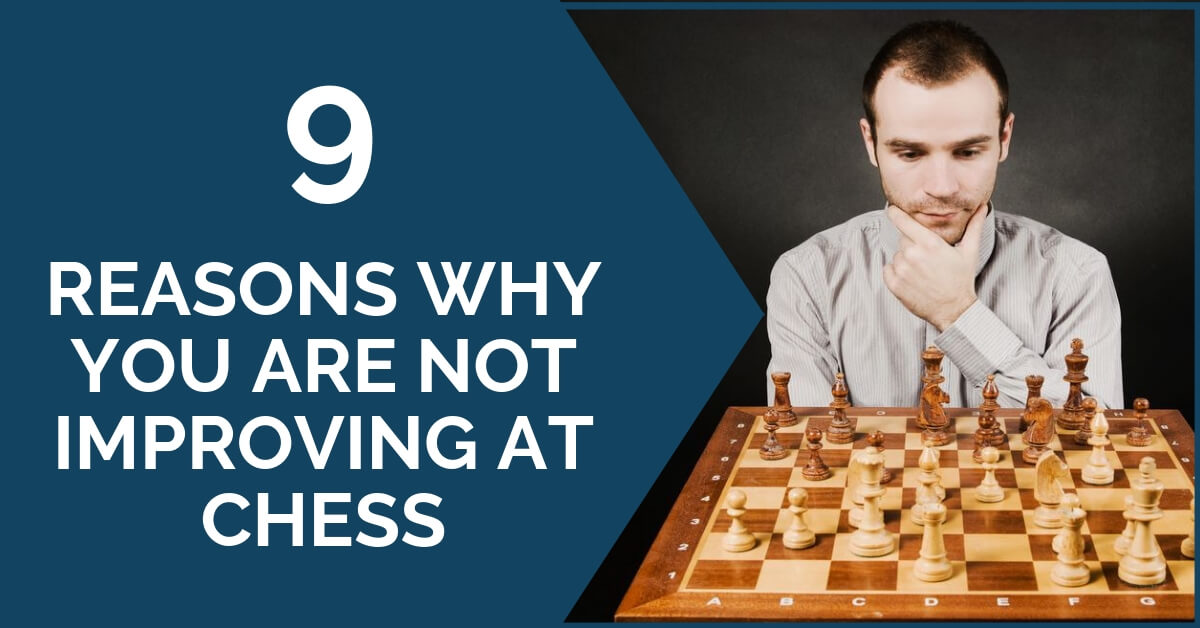 How many of you have tried to get better at chess without fully achieving your ideal goal? This is not uncommon at the aficionado level. Even at more advanced level signs of being stuck in the same place appear often. What’s wrong then? It’s hard to give an answer to this question; after all, in chess, as in every other sport, each person is unique. However, here is a list of what we think are the most common reasons club players do not improve over the years, although they are trying to. The same reasons could be used for intermediate players who don’t take that leap onto the next higher level. The list is not done by the level of relevance, every aspect matters.

1. Going at it alone

This is basic. Chess improvement is faster, better and more fun when you work with a partner or a coach. Studying alone is only profitable when you are already strong enough to know what your chess needs are.

2. Bad use of a chess coach

There is a vast number of players who think that by just hiring a coach they will start to become stronger as if it is a guaranteed thing. Nothing farther from the truth.

Hiring a coach is great, but you still have to do the work. You have to be curious, you have to ask questions, you must be an active learner and not some recipient hoping to start playing well after a couple of lessons.

Most of us have a list of bad habits that are not that healthy for our chess development. For example, viciously playing blitz online or at the club for hours and hours. If only it was the blitz, but there’s also the bullet.

Obviously, there is no improvement to be found here, only fun.

Another bad habit is constantly using engines when following games online; completely useless and not only you don’t improve, but you also grow a false sensation that you would “see” these moves if you were playing. Avoid it; the first step to improvement is to put your brain to work.

4. Not learning from your mistakes

Your games are the greatest source of improvement. You should analyze your games properly and learn what your strong points and shortcomings are. Once you know this, it will be easy to focus on what chess aspects need to be improved.

5. Not believing enough in yourself

This is no less important!

All strong chess player we have met have in common a powerful confidence in their abilities; sometimes their beliefs are even higher than their actual skills. However, this doesn’t matter; the point is if you don’t believe you can be a good player you won’t be one.

Chess you don’t learn, chess you understand! A famous quote by Viktor Korchnoi. What does this mean?

What we interpret is that the way you see chess can change over the years; sometimes things that weren’t clear at some point become easy to understand later on. Korchnoi also said that he had to “relearn chess again”.

He said that after winning the Soviet Championship! Imagine that. Truth is that chess is hard, very hard. So there is no point in getting frustrated if your training isn’t showing up right away. Believe in what you’re doing and keep doing it, enjoy the process and don’t think of the result.

7. Not working on your own

Here is a typical scenario. A club player gets a coach to work one or twice a week. The rest of the week he does nothing on his chess, perhaps just online blitz. This way it is really difficult to make real progress. There will be some progress normally, but one that will disappear once he quits working with his coach. Remember point 2, be an active learner.

8. All study and no play

As much as we wish for an infallible recipe to chess improvement we haven’t found one yet. We believe the secret is a balanced training. You can’t work on openings alone and no middle game or endgames, it will fail. Same the other way around. But it’s not just this, the chess games also contain nerves, experience, practical thinking.

Things you can only learn in competition even if friendly, for training purposes only. So it is essential to combine both: study and play, theory and practice.

Last but not least, a common mistake in the aficionados is to be content with a positive result. For example, it’s all about winning no matter against who. It is not really like that, winning always against weaker players is a dangerous comfort zone that one has to avoid. Seek for the strongest opposition, learn as much as you can from playing against strong players. Do not get frustrated because of losing, instead analyze the game and learn how they think, what they see. Change your game.

We hope you have enjoyed reading and maybe even identified with some of the problems explained above. Thank you for reading and feel free to share your thoughts with us.