Best Games from the FIDE Candidates 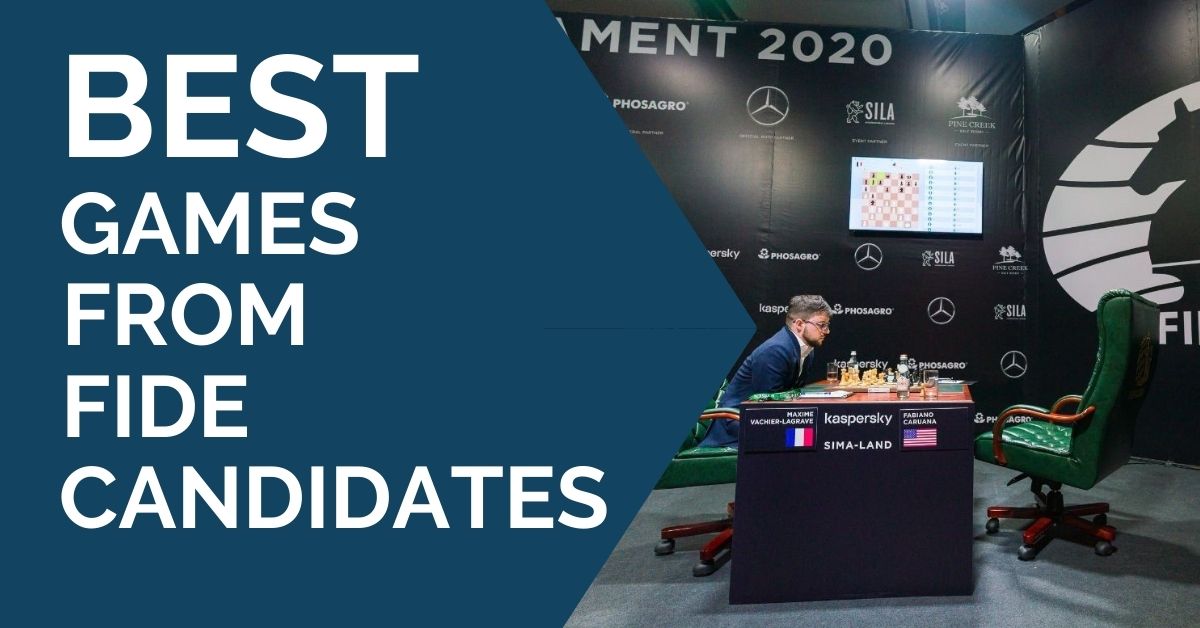 After the longest half-time break ever, the Candidates Tournament in Yekaterinburg resumed. Ian Nepomniachtchi won the tournament with8.5 points and a round to spare and thus gained the right to challenge Magnus Carlsen for the World Championship title. Maxime Vachier-Lagrave is second with 8 points. Anish Giri and Fabiano Caruana have shared third place with 7,5 points.

“This success is a huge milestone in my career. Perhaps in my life also. Indeed, I am extremely tired because I don’t think I would ever like to play a tournament again, which lasts more than one year. … I am very happy it paid off in the end but I don’t think I would like to have such an experience again.” – said the Russian.

The candidates are over, but here we can see once again a few of the best games from the tournament. With round 8 the Candidates have been finally resumed in Yekaterinburg.

Fabiano Caruana came with an impressive piece of opening preparation against Maxime Vachier-Lagrave. This happened in the Poisoned Pawn variation of the Najdorf, the same opening that these players also had on the board three months ago at the Tata Steel Chess tournament. The idea of sacrificing the bishop came from Caruana’s second and had been waiting on the shelf for several months. In fact, Kasimdzhanov himself said that they felt it was too strong to try out in Wijk aan Zee!

Fabiano was blitzing up until move 25 but MVL was resilient and found the best defense.

“Maxime played the best way,” said Caruana. “I was kind of upset that he played this because I thought 19…Nf6 is a very difficult move to find.”

MVL still had problems to solve. “Then it got down to this endgame which I thought I should be holding quite easily but maybe at that moment I made a few inaccuracies, I don’t know exactly,” he said. After missing 26…Ra7, black eventually ended up an exchange down in an endgame where he had a fortress.

At the press conference, it was pointed out to him quite instructively that putting his knight on g7 would have been a good setup as the critical squares e6, e5, f5, g5, and h5 are all covered “I really thought this was an easy draw but then it got messy,” said Vachier-Lagrave. As it went, he couldn’t prevent the white king from reaching h5.

6.Bg5 [Caruana has played many different lines here, but he chooses to repeat the line, which brought him a victory against the same opponent 2 years ago]

6…e6 7.f4 Qb6 8.Qd2 Qxb2 [This is a very popular and sharp line, in which black takes the so-called poison pawn, but in exchange, white wins time for his development]

16.c3 [A rare move, most players prefer Be2 and then to castle quickly. Obviously white has prepared something]

[16…Be7 17.Bxe7 Kxe7 is also interesting for black. No castle but he is defending the dark squares]

17.Bg3 Qd5 18.Bc4! [This move is like a bomb. Clearly, Caruana has found an amazing idea. The biggest problem for black is that clearly he don’t know what is going on and has to think a lot, while white is playing very fast and he knows what to do as he has prepared this with his computer engines.]

18…Qxc4 [now black has to think because he has many options, but everywhere the games are very sharp, and this is the area in which the engines are the best so it’s not easy to compete with them.]

19.Bd6 Nf6 [Black gives back the piece in order to develop a bit. It is possible, although now he has to suffer for free as white still has the initiative]

22.Ndxe6 [Caruana is still playing without thinking for a minute, which shows that he remembers the line]

26…Ne4?! [Inaccuracy. Ra7 was best. For the first time in the game, Caruana is thinking. It is time to start playing on his own now.]

31…Rc7 32.Rf4 [white has to exchange pieces in order to get rook against knight endgame and to try to win]

Anish Giri moved up to second place after he defeated Ding Liren in round 11.
Giri went for a delayed Exchange variation of the Ruy Lopez known as the Steenwijker variation: first moving the bishop to a4 and then taking on c6 after all. The idea is that with Black having played his king’s bishop to e7 already, it would be harder to defend the e5-pawn. In general, in this line black don’t have problems.

Later Ding found the excellent 17…f5! and after the next move, Giri felt he was “under huge pressure.” But right after, the Chinese GM made a mistake, missing his opponent’s reply.

White has closed the files against his king and later when Ding went b6 decided to sac a piece.

Giri called his knight sacrifice practical: “I’ve seen so many more dumb sacrifices performed by me that this was one of the better ones. It’s so easy to play and my king is so much safer. He shouldn’t have taken of course but when you suffer, you want to suffer for something sometimes.”

With his win, Giri approached Nepomniachtchi by half a point. “A few people already told me that it was a great game but I don’t think it was as great as it looked at the end. At some point he was the one who had all the play, he was sort of dictating the course of the game.”

6…dxc6 7.d3 Bd6 8.Nbd2 [White just want to get a solid position without much active counterplay for black but he doesn’t have an active plan in the near future]

9…Qe7 10.Na5 [obviously this is the point, now black has to castle queenside]

11…Bg4 12.c3 [the game is equal and it seems there will be a lot of slow moves as it is not easy for both players to attack despite the fact that we have opposite castles]

17…f5! [Ding uses his chance to start counterplay on the kingside]

23.Ne4 [Giri is offering a piece but it was better to keep it more simple]

27…c5?? [Blunder but anyway the game is probably lost.

In the last round, the winner of the tournament Ian Nepomniachtchi had to face Ding Liren who just started to find his form, winning 2 games in a row. As it often happens Nepo wasn’t motivated much and lost the game, but credit also to Ding who had e great game and has finished with 3 wins in a row.
It was a deviation of Benoni, where white opted to delay with Nc3. Black has started an early attack but then in the complications white defended well and later got a serious advantage.

This way, Ding finished on 50 percent after becoming the “winner” of the second half with 4.5/7.

“I hoped the tournament would be a bit longer since I was just in the form now,” he smiled. “Of course in the first half of the tournament I played very badly due to a long quarantine and I did not prepare too well. I think in the second half of the tournament at least I prepared much better and I had many promising positions. If I had played my best, maybe I would have had some chances.”

20…Qh3 21.Bf4 Qxf3 22.Nd2 [Ding is playing faultless and with confidence. White has developed with tempo and is increasing his advantage]