Chess is a tough game and, needless to say, requires many hours of training in order to get good at it. A chess player needs to develop many abilities, such as a decent understanding of the position, good tactical vision, good memorization of the theoretical lines and so on. All this might sound discouraging for someone who wants to improve his play and rating, so how to do it? What is the difference between the rating levels and what should one study in order to reach a higher one?

In this article we are going to talk about the differences in thinking between lower and higher rated players and how this impacts the decisions made over the board. We’ll also try to give you some tips on what to study in order to improve your strength.

A player can first of all improve by learning the basic tactical motifs such as the pin, the double attack and so on and by solving many puzzles that will help develop the combinational vision. This, getting some basic positional concepts that help you develop a short plan and learning the basic endgames should help you reach 1600. Up to this level, you shouldn’t focus too much on theory. It’s very important to have the basic concepts of chess very clear.

From now on, you should start working a bit on your opening repertoire. You don’t need to memorize long lines at this point, you just need to have some clear ideas and know what the main plans are in the resulting positions. Also, solving a lot of tactics in order to develop your calculation is very important. All this should get you to a higher level, such as 1800 or even higher. However, what makes the difference from here to becoming a higher rated player is the positional understanding.

From personal experience, we have noted that many players that have reached this level tend to take unnecessary risks when faced stronger opposition. By this, we mean that their decisions are mostly driven by their preference for an attack, even if the position on the board requires some prior preparation or even a completely different type of play.

These decisions usually create weaknesses and the higher rated player will try to take advantage of them. Let’s take, for example, the position in the diagram below: 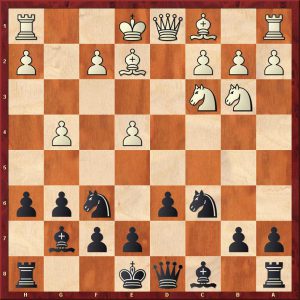 Nunez de la Cruz, G (1811) – Sgircea, S. R (2267)
White to play
My opponent has chosen an attacking line against the Accelerated Dragon variation of the Sicilian Opening. However, the move g4 has already weakened a bit the kingside and the dark squares.

So, before continuing any further actions on the kingside, he should first make sure that black isn’t given a chance to use this weakness, so the move I was considering during the game was Be3, stopping any Qb6 ideas, followed by f4 and so on. Instead, he went f4 immediately and after …Qb6 he found himself in a slightly worse position.

Another difference in thinking is from a psychological point of view. A strong player usually looks for moves that unbalance the position, and you should try to do the same. Of course, everything should always be rightly-timed. Remember, the moves that trouble your opponent are the active ones!

Sometimes you have to take some risks in order to put your rival in an uncomfortable situation. For example: 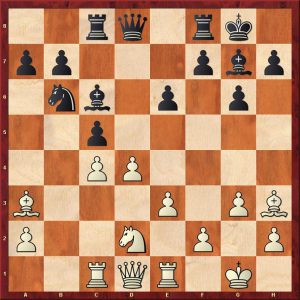 Sgircea, S. R. (2267) – Guasch Murtra, J (1999)
Black to play
I had just played 17.Ba3, trying to put some pressure on black’s position. The obvious defense is, of course, 17…Nd7, which was actually played in the game, but this move is rather passive and I can continue with Nb3, Qe2 and bring my rook to d1. I eventually won the game, but black has a more active continuation here. Can you find it?

One more important difference is knowing when and what pieces should be exchanged. Many times, a lower-rated player will seek trades without putting a lot of thought into it, hoping that this will eventually yield a draw. On the other hand, the stronger player usually knows what kind of exchanges he’s looking for and what positions he wants to achieve.

The following diagram is a continuation of the previous game: 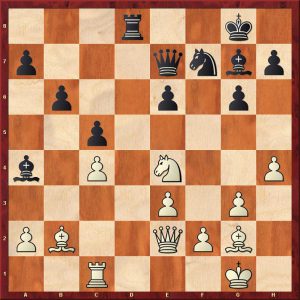 Instead, he chose to liquidate the material and got into a worse endgame.