Don’t Be That Guy at Chess

Here are a couple of funny “don’t do’s” of tournament chess shared by the chess.com user linlaoda.

This is a purely comedic and not serious post that is a spinoff of “don’t be that guy at the gym” theme.

Are you committing any “chess crimes?” Let’s find out 🙂

1. Don’t be that guy who stands too close to the board when observing. It’s hard to concentrate when you can feel someone breathing on you!

2. Don’t be that guy who forgot to shower… self explanatory.

3. Don’t be that guy who goes outside and talks about their game to others. I’m sure you could find something else to talk about 😉

4. Don’t be that guy who coughs or makes loud noises – chess players like silence!

5. Don’t be that guy who hits the clock so hard that everybody in the room hears it.

6. Don’t be that guy who mumbles the chess moves he is thinking about under his breath.

7. Don’t be that guy who knocks the pieces over during the final seconds of play.

8. Don’t be the guy who gets up and leaves the playing area on his turn.

9. Don’t be that guywho falls asleep at the board.

10. Don’t be that guy who loses the game but always wins the post mortem.

Do you feel you have become a better chess player? Let’s test you. 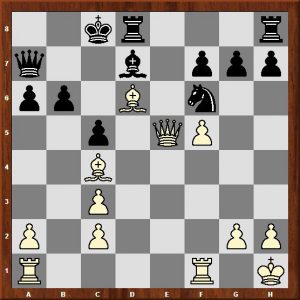 White to move and win!

Hello Rose Marie Stutts! These are some great ones, indeed!

Don’t Be The player who gives a limp ‘dead fish’ handshake.

Don’t be that player who critiques his/her opponent’s game for him/her during or after play without being asked to do so.

Don’t be that player who coughs, sneezes or wipes his/her nose with the hand used to play the chess pieces.

Don’t be that guy who can’t stop clicking a pen when writing down your moves.

Don’t be the guy who yells mate in 10 and end up losing the game in the next 8 moves.

That’s a correct solution, my friend!

Don’t be that guy who stares at boobs

Don’ t be that guy who move nervously up and down his legs making an earthquake on the table.

These are the good ones! Thanks for sharing!

Don’t be that guy who cry after losing a game of chess.