Efim Geller – Learning from the Legends 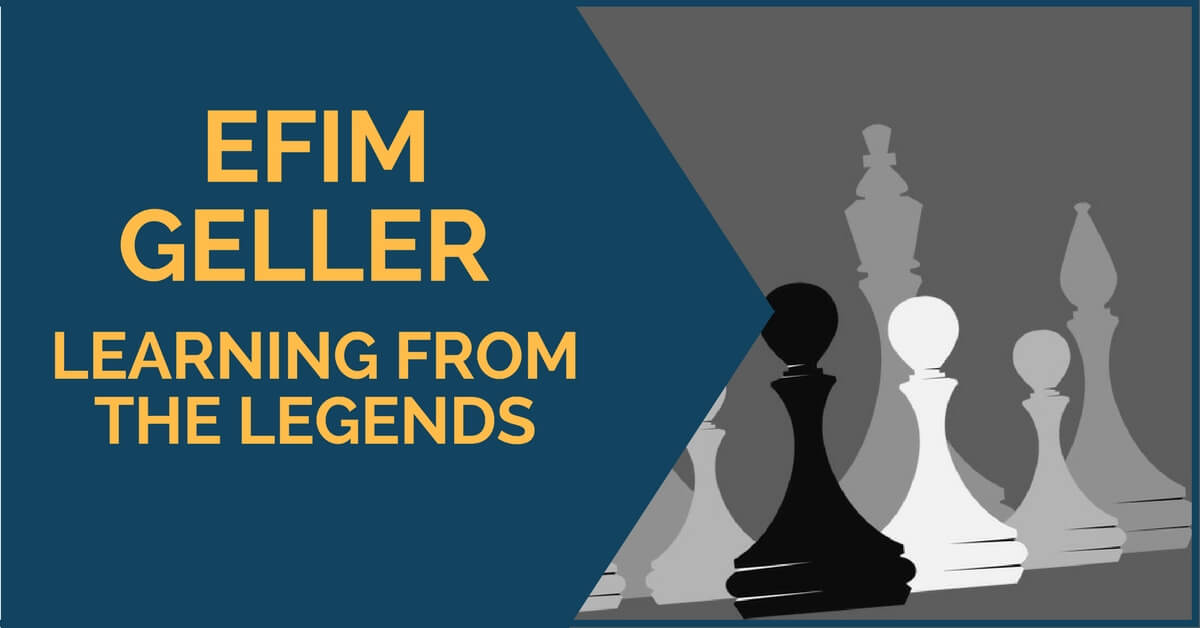 We believe that knowing the classics is one of the first steps to improve in chess. This is why we have started this series of articles where we try to bring you closer some of the great classics of our times and show some of their games to serve you as a starting point for your own further study. So far we have talked mostly about ex-World Champions, names that every chess player knows. In this article, we are going to present you a very strong player, but considerably less-known, especially by the younger generations. He never got to be a World Champion, but he was one of the best players of his time and scored many wins against his famous colleagues.

Efim Geller was born in Odessa, in the Soviet Union, in 1925. He began to make his mark in the late 1940s, with his most notable result so far being achieved in 1947 when he placed sixth in the Ukrainian Championship. Two years later he qualified in the USSR Final, where he tied for 3rd-4th, by defeating well-known players like Flohr, Petrosian, Boleslavsky, and Kotov. He was awarded the International Master title in 1951 and the Grandmaster one in 1952. He is also reckoned to have been among the top ten players in the world for about twenty years.

He played the Candidates tournament several times and he achieved his best result in 1962, when he placed second, behind Tigran Petrosian. In team events, he has successfully represented the USSR several times, both in European Championships and Olympiads. He was selected over a 28 years span for the latter and contributed to his team greatly, having won three gold and as many silver medals on his board. He remained active in chess tournaments until he was 70, continuing to win many important competitions and producing highly instructive games.

Although his early games were characterized by an original attacking style, Geller developed into a universal player. He was viewed as an opening expert, having brought significant contributions to many important opening such as the King’s Indian (for black) or the Najdorf (the 6. Be2 line, which he used to defeat Fischer). His work also included helping the top players of those times, being a second for Fischer, Keres, and Petrosian.

Geller has played many instructive games and a quick search in the database will show numerous wins against top players of his time. For the purpose of this article, we have selected only three of them, but we invite you to include his games in your training routine – you will have a lot to learn! We are going to start with his win against ex-World Champion Mikhail Botvinnik with the black pieces in 1952. He used one of his favorite weapons, the King’s Indian, and soon obtained a superior position that he didn’t fail to convert.

Check out the game:

We will continue with another resounding victory, this time against Bobby Fischer with the white pieces in the Candidates tournament in 1962. Again, we see him using one of the lines he has developed himself – the 6.Be2 against the Najdorf. It’s a very instructive game where we can learn how white can conduct a powerful and successful attack on the queenside.

Last, we have decided to add a game from his last years as an active player. Here, he beats Russian (now playing for Spain) Grandmaster Oleg Korneev, who at the time was in his best shape, in the Russian Championship in an interesting strategic fight. It’s instructive to watch how white tries to make the most of his bishop pair, but at the same time tries to keep black’s pieces uncoordinated.

Play the game with commentary below:

Great article,
but I think there may be a mistake here:
“His work also included helping the top players of those times, being a second for Fischer, Keres, and Petrosian.”
The meaning reads he was a second (assistant, coach) to Fischer, but they never worked together
(on the other hand he was also a second to Spassky and Karpov besides Petrosian).
If the intended meaning is “he was top 1 in the world except for Fischer..”, then I think it should read “he second to Fischer”.

Thanks and again great article.