How to Beat Higher Rated Opponents – 7 Things to Know

One of the things that mark our progress in chess is when we start having good results (draws and victories) against stronger opposition. That’s when we feel things are working well and we should continue working in order to become better and better.

There are several players that are specialist in winning against lower rated players and players of the same level but constantly fail to get a result when the opponent is higher rated. The most common reasons are poor opening preparation and superficial thinking.

A third reason can be a mix between inexperience and getting too nervous at the time of fulfilling a better / winning position, allowing the opponent to escape. In this article we will give you our advice when playing against a higher rated opponent.

First, it is important to know how to prepare for this game psychologically:

It is important to be aware that your opponent is a very strong player but not to fear him is even more important. No emotions at the chessboard! It is hard, but it can be achieved if not totally, then at least by keeping them to a minimum. Emotions interfere with your thinking and often lead to wrong decisions. Stay calm.

2. Prepare for a tough & long game

Your opponent will see as much as you see and even more. However, this only means that your thinking has to be profound, so you should stay away from the temptations of cheap tactical tricks. Gambling is certainly a mistake because a strong opponent will spot the trick and refute it in 9 out of 10 games.

3. Do not refuse complications

Decide whatever you feel is necessary to do. Play against the pieces, like Gligoric used to say. Don’t base your decisions on your opponent. If you see the complications are necessary because it is your best choice in a difficult position or it is the road to an advantage, then go for it.

No matter how strong he is, your opponent could have a bad day, could get tired if you make things difficult and could simply be out of shape. There are many factors that can appear during the game that you never know. Be aware that it is very likely that at some point during the game you will have one chance (to get a good position or even better) and it is important not to miss this chance.

Preparing for the game:

5. Choose whatever opening you know best

Against a strong opponent you need to play your best chess, so it doesn’t make sense to go into new territories trying to surprise him. If you do this, then it’s quite possible your opponent will see this coming, choose a sideline and get you in a position you have no idea what to do. It’s best to stick to your guns and play your best.

Let’s see now some examples of what has been written above in action:

It was my game against Viktor Mikhalevski in the Calagary International Open 2011. I was playing black and my opponent has been putting severe pressure on me during the opening phase. After some stubborn defense and imprecise play from white we reached the following complicated position: 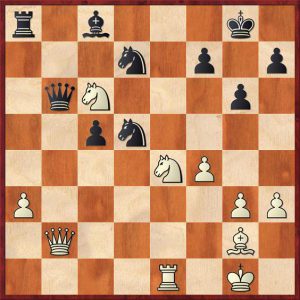 White could keep some advantage by trading queens on b6 followed by capturing on c5 with the knight. Viktor, who was better during the whole game thought his position deserved more and went on with 28.Nf6+? Can you spot what is wrong with this move? Before playing the moves n the board think for a minute. See the details here:

In my game against the very strong GM Aleksander Delchev in 2006 I was black in the following position: 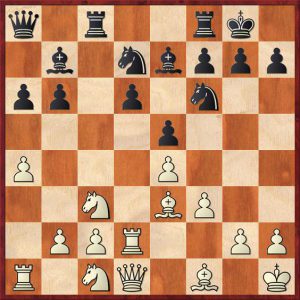 Without even noticing I had fallen into a passive position. After my opponent played Nc1 I realized his idea was to play Na2-b4 and eventually Nd5 with an overwhelming positional advantage.

I first panicked since there was nothing I could do to stop this at a first glance, but after some thinking found a nice plan to make things more complicated for white, risking everything. Although what I played was still worse for black, things were unclear for my opponent and he did not find the best moves. See full details here:

We hope you find the advice above useful for your own tournament practice. Of course, remember that this is not a secret formula; all that matters on the chessboard are good moves. Good luck!