Misha on a Magic Carpet

9th November happened to be the 80th birth anniversary of Mikhail Tal (1936-1992), former world champion and legendary player. Here is a tribute by our columnist-Ed.

Misha Tal reveled in simultaneous displays. They gave him an opportunity to travel, see places and meet people.

Public adored him and he enjoyed their adulation. In such events his play was uninhibited and he moved pieces with gay abandon. For him chess was fun. Take a look at this miniature he played when he was past his prime.

The year after this display he won the World Blitz Championship at St. John, Canada

Racing ahead of Karpov and Kasparov who were eliminated in early rounds. He also received a number of invitations to give a public performance. More often than not he readily obliged, though his physical condition remained a cause of concern. 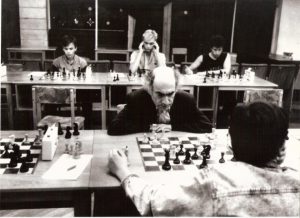 Here is a wonderful display from a simultaneous exhibition at Los Angeles, USA.

Misha often inspired his opponents to play such chess with him.

The Singer is gone and the Song lives on.