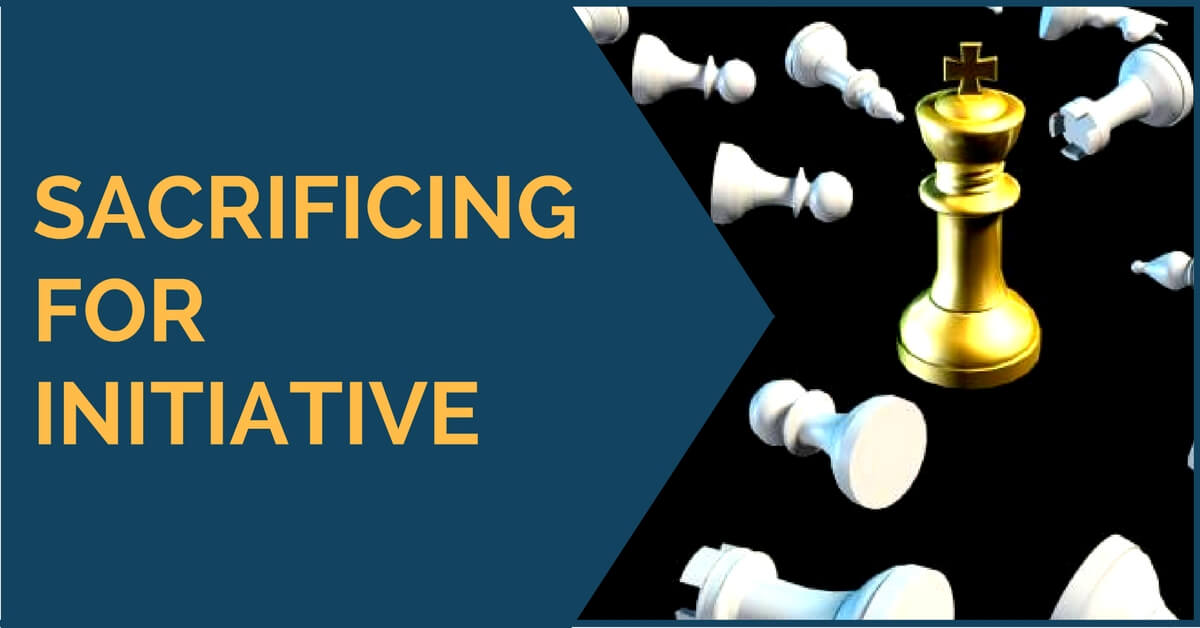 Since the very moment we start interacting with chess, we have been taught that we must play active and seek any chance our opponent gives us in order to do so. We are told to improve our pieces and put as much pressure on our opponent as possible. We are also taught to try to win as much time as possible by developing our pieces with tempo and force our opponent to interrupt his plans by having to defend instead of getting active. This is known as seeking the initiative, something we should be considering at all times.

It doesn’t matter if it is an equal position or if there is a material imbalance on the board. We should be on the look for active moves at all times, both for ourselves and our opponent.

Basically, initiative means that you are pulling the strings and have your opponent cornered. You are delivering punches and he has to keep parrying them. Sometimes, it can even become more important than material. This is valid from both points of view.

Even if you have a material advantage, allowing your opponent to get active play could turn the tables. It is not a general rule, but things will definitely not go smoothly for you in converting the advantage. However, in this article, we are going to talk about ways to seek the initiative and one of them is to sacrifice material.

This type of sacrifice, just as the positional one, doesn’t yield an immediate win, but allows you to increase the pressure on your opponent and to be able to call the shots. The win might not come straight away or it may not come at all, and this is a risk you have to evaluate when you start the combination.

There are different types of sacrifices in order to get the upper hand; the most common ones would probably be the pawn breaks. Another common situation is to sacrifice material for development advantage, for breaking our opponent’s defenses or in order to be able to develop an attack. Another well-known form of sacrifice are the gambits and the next game is a very good example of what can happen when one side gets ahold of the initiative.

This is a recent game from the last year’s FIDE World Cup between two Grandmasters, Bator Sambuev of Canada and Wei Yi of China. The sacrifice involved here is a rather common gambit, where white lets go of the pawn on c4 in the Nimzo-Indian.

Black missed the chance to keep the balance in a complicated position where white had already started to increase the pressure and create threats against his king.

The next game sees a famous Grandmaster and author, Mihail Marin of Romania, winning a miniature with another pawn sacrifice in exchange for development and attack. It was another Nimzo-Indian where black’s chances were cut to the minimum after accepting the pawn offered.

He sacrificed another one in order to open his two bishops towards black’s king. Check out this beautiful game:

The last example comes from the Alapin Sicilian, a line known to be used by players who seek activity and like complications. In this particular line white sacrifices not one, but two pawns for development. He kept on creating threats that black was forced to keep parrying instead of finishing his development.

The game was another miniature where things got ugly for black.

Check it out below:

With this, we conclude our current presentation on the importance of the initiative. As you have seen from the examples presented above, it can become a dangerous weapon and is sometimes worth giving up material for.

We hope you have enjoyed this article and will be able to make good use of the ideas presented here in your future games. Good luck!

thanks alot sir you are the best thanks for great article