Starting an Attack: 5 Things to Know 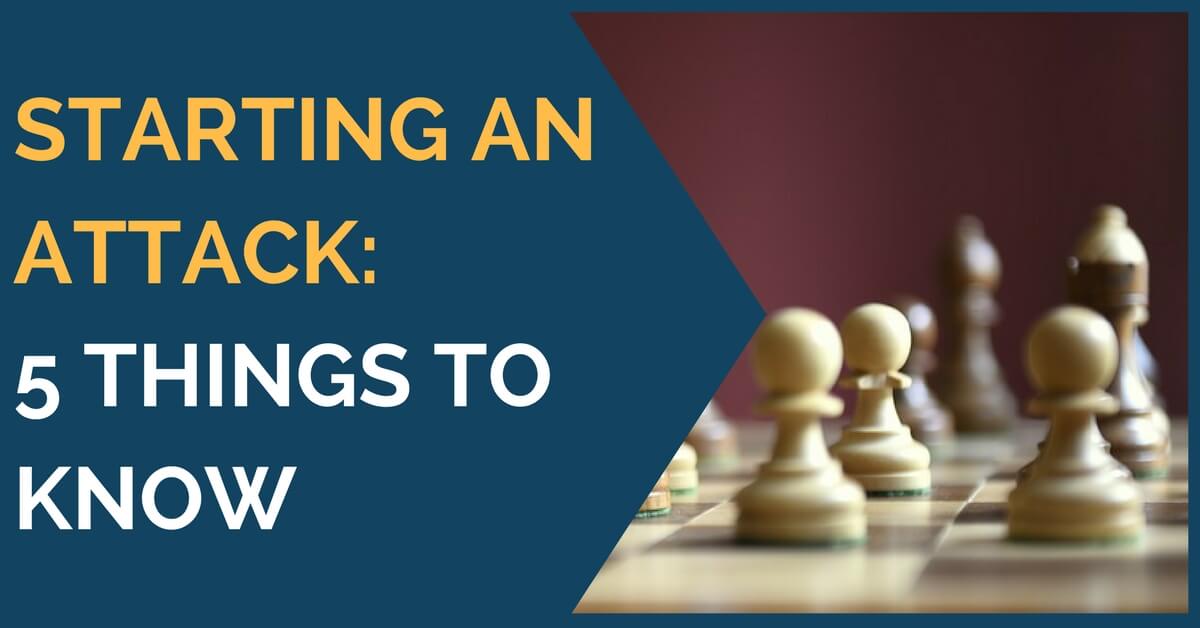 Playing a nice attacking game with tactical blows always gives a good feeling. However, in order for it to be a good one and your attack to be successful, there are a few guidelines you should take into account. Most amateurs like to attack no matter what and start it out of nowhere, without taking any preparatory steps.

This might work against weaker players, but against a strong opposition, it is rarely successful. Aggressive moves made in the wrong moment, when the position doesn’t have a dynamic character can weaken the position and give the opponent targets of attack. So, instead of giving him something to worry about, it might be that you will soon find yourself under pressure.

Then, how should an attack be built?

Here are some useful ideas that you could use in your game:

Before getting offensive, make sure that all your pieces are out and your king is out of danger. An attack cannot be conducted with only two or three pieces if your opponent is well developed.

The threats will be in this case in vain and easy to counter. It is essential that you get all your pieces out, control the center and put your king into safety before taking any actions. There are exceptions, of course, but we are considering the case when your opponent is respecting the opening principles and develops correctly. Most of the times, getting creative when under-developed fires back.

It is usually useful to bring as many pieces as possible in the attack before starting to push the pawns. It is common knowledge that pawn moves can create weaknesses in the structure and, if they are not supported by pieces, they might do just that.

So, try to imagine the ideal squares for your pieces in the attack, where they should be placed in order to create threats and find a way to make it happen. Force your opponent to weaken his castle’s pawn structure by provoking pawn moves. Once you have some targets of attack and your pieces are harmoniously cooperating, you can put the pawns in march as well.

3. Pay attention to the character of the position

It is very important to determine what type of play is required, if the position really demands dynamic actions or it is better to consolidate the slight advantage you have and approach a static play. An aggressive move that is made in the wrong type of position can bring irremediable damages that can prove fatal in the long run.

Even if you are an offensive player by definition, try to avoid going crazy in any position just because you like to attack. Learn to play in the spirit of the position and develop your “feeling” for the type of moves you should be looking for.

This is an element that can be easily overlooked when trying to develop an attack. It often happens that we get too excited about a certain idea that we try to make work and we forget to take a look at the position’s characteristics. The pawn structure is, in fact, a very important indicator of whether we can start an attack or not and where.

When preparing an attack it is easy to accidentally ignore the opponent’s ideas. However, looking for his plans and including them in our own should become a habit. Remember that, if you are planning an attack on a flank, the best response is a counterattack in the center, and your rival might try to do just that. Make sure you don’t weaken your king too much and get mated yourself in the process.

Also, considering that an attack requires a concentration of forces on one side of the board, remember not to leave your king completely alone on one flank. Assess your opponent’s attacking chances as well and do your best to fend them off while preparing your own attack.

There are, of course, many other plans you could follow, depending on the position – if the kings are on different flanks, different attacking patterns and sacrifices – but the ideas we chose to outline can be used in any type of position. We hope that the above-mentioned guidelines will help you in your practical encounters and you will manage to win many beautiful games.