The Perfect 1.e4 Positional Play According to Michael Adams 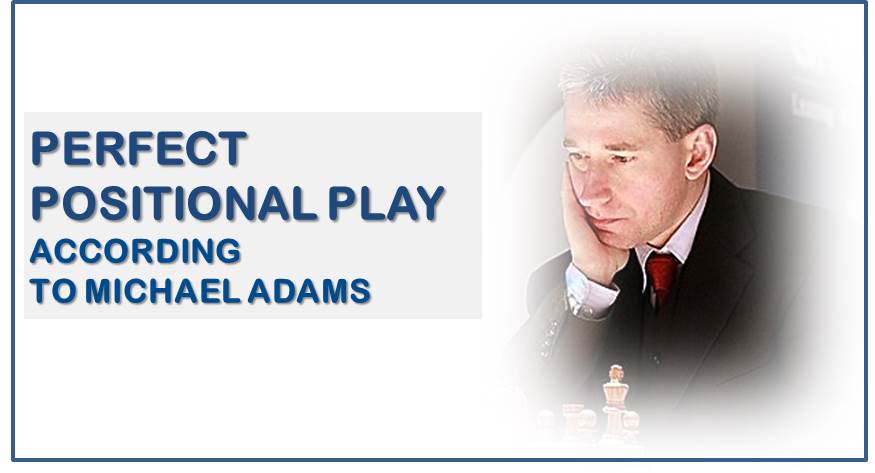 The English Grandmaster Michael Adams has been a reference player for the past 20 years in the sense that he has kept his position among the elite players.

His playing style is very positional, always trying to squeeze the small advantages without taking many risks.

Despite being a deeply positional player, Adams has always preferred the move 1.e4, something that makes him different from his colleagues at the highest level. One thing to learn from his games is how he keeps his opponent’s counter play reduced to a minimum, especially when he has the white pieces. Another remarkable thing about his games is how much importance is given to the pawn structure. You can rarely find him playing openings that lead to compromised pawn formations.

His strategic style is easier imposed with the white pieces and his opening repertoire is designed to find positions of comfort with a slight pull in order to press without risking much. It is not easy to get “Mickey” into a sharp, double edged position when he is on the white side.

The Tarrasch against the French and the Rossolimo against the Sicilian with 2…Nc6 are his main weapons. Both of them are extremely solid choices. Against Sicilians with 2…d6 he varies between different weapons to fight the Najdorf or he just avoids it with 3.Bb5+, the so-called Moscow variation. With the black pieces he usually opts for the classical pair of Queen’s Indian plus Nimzo Indian, although the Tartakower and the Bogoindian are also present in his arsenal.

Many players feel identify themselves with Michael Adams’ style of play. By using these openings and playing style he has been able to compete with the elite without depending on computer’s work to survive. He just uses simple chess.

In this article we wanted to share with our readers some examples of Adams’ finest victories with the white pieces employing his favorite weapons. These are some good examples of how to tame your opponent’s intentions and play for a small, but lasting advantage.

The first game we have chosen is Adams’ victory over Spanish top Grandmaster Francisco Vallejo in Gibraltar 2010. Vallejo chose the French as black but couldn’t achieve a good position, while white kept a slight advantage that later turned decisive. A game that shows a perfect mix of strategic and attacking play.

Our second example is probably one of Adams’ best games of his career. We are talking about his victory over Vladimir Kramnik in Dortmund in the year 2000. He chose the Rossolimo variation against Kramnik’s Sicilian, a variation that has been one of Adams’ main weapons for several years.

He quickly captured on c6, ruining black’s pawn structure, and kept on improving his position and increasing his positional advantage. A game that’s definitely worth seeing with a lot to learn from.

Last, we have chosen the game against David Navara, a well known talent from Czech Republic. Navara played the Najdorf variation, but there were no flashy counter attacks. Adams’ choice of 6.g3 kept black’s position under control and Navara failed to create any counter play.

In the end, Adams obtained the better side of an opposite color bishop middlegame and went on to win convincingly.

One of the problems we had when teaching positional chess is that most books written tend to use games that started by 1.d4. That meant that even if the positional motifs were good, the structures were unfamiliar to our students who played 1.e4.

However, going through Michael Adams’ games, we have found several examples of positional play applied in structures that arise from 1.e4. We felt inspired to share these findings with our readers, so we hope you have enjoyed it as well and learned new things from it.