Getting a good positional understanding is an important step to improving your play and becoming a stronger player. Studying the basic themes, seeing the positional masterpieces played by the great players and solving many exercises can help you in this direction. One of the most important concepts, which appears in probably every single game is weaknesses and understanding how to identify and use them in your advantage. Not only this, but you have to also try to create as little as possible in your position and know how to get rid of them if you have any.

A weak point is defined as a point in your opponent’s side of the board that cannot be defended by another pawn. This can be only a square that you can use for your pieces in the future or a pawn that can become a target of attack.

Although this idea seems easy to understand, things may not be so easy at first, when you are just starting to get acquainted with this concept. In this article, we want to clarify a few things about it and give you a few tips on how to use them in your favor.

First of all, it is very important to understand that weakness can be called this way only if it is possible for you to attack it. This idea is often overlooked; it is not important to identify weak points that cannot be used. Those are of no interest to us and therefore cannot even be called a “weakness”.

Here are two examples that clearly illustrate this idea: 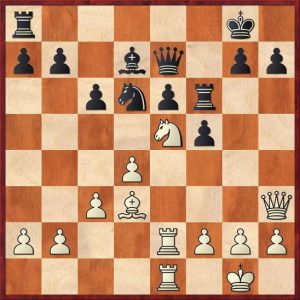 In the position above, white is clearly better. Black has two important weaknesses in this position, the pawn on e6 and the square e5, that white can use to his advantage. He has already brought a knight to e5 and is slowly building pressure against the e6 pawn. Black’s position is cramped and he has to stay passive and defend. 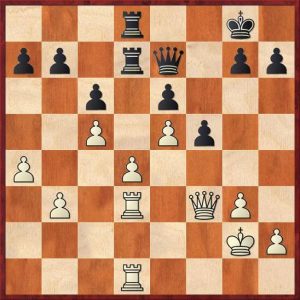 If we look at this next position from white’s point of view, we may identify the square d6 and the pawn on e6 as weaknesses. However, none of them can be of any help to white whatsoever. With the light pieces off the board, the square d6 is unreachable, while with the e file closed, he cannot put any pressure on e6 either.

However, there is one important weakness in white’s camp and that is the pawn on d4, against which black can start putting pressure with his heavy pieces.

2. Find the second front of the attack

Having to defend only one point can be sometimes easy for your opponent. Yes, he will have to stay passive, but as long as he can hold his position together it may become difficult for you to find a way to break through. This is why it is important to find or create a second weakness.

With all his pieces tied up to the defense of one point already, it will be difficult for your opponent to switch to the defense of a second one. Combine threats against both of them and your attack is likely to succeed.

When you have obtained a position where you are totally in control and your opponent has no active ideas it is important to keep it this way. You don’t have to rush and try to win the game immediately by opening the position or creating unnecessary weaknesses in your camp.

Pay attention to your opponent’s ideas of counterplay; opening the position too much may give him chances to become active and, even though you may see that the computer’s evaluation is still very much in your favor, in a practical game it will be much more difficult to win.

Don’t give your opponent any practical chances that force you to find exact moves in order to convert your advantage. Instead, keep building the pressure and improve your pieces and wait for the right moment to strike.

Related Products
2.7 3 votes
Article Rating
Login
0 Comments
Inline Feedbacks
View all comments
Join the FREE Road to 2200 Masterclass (and learn how to Attack Like a Chess Master)
We value your privacy
Supercharge Your Chess in 21 Days!
Join Academy Today!