Vassily Smyslov – Learning from the Legends 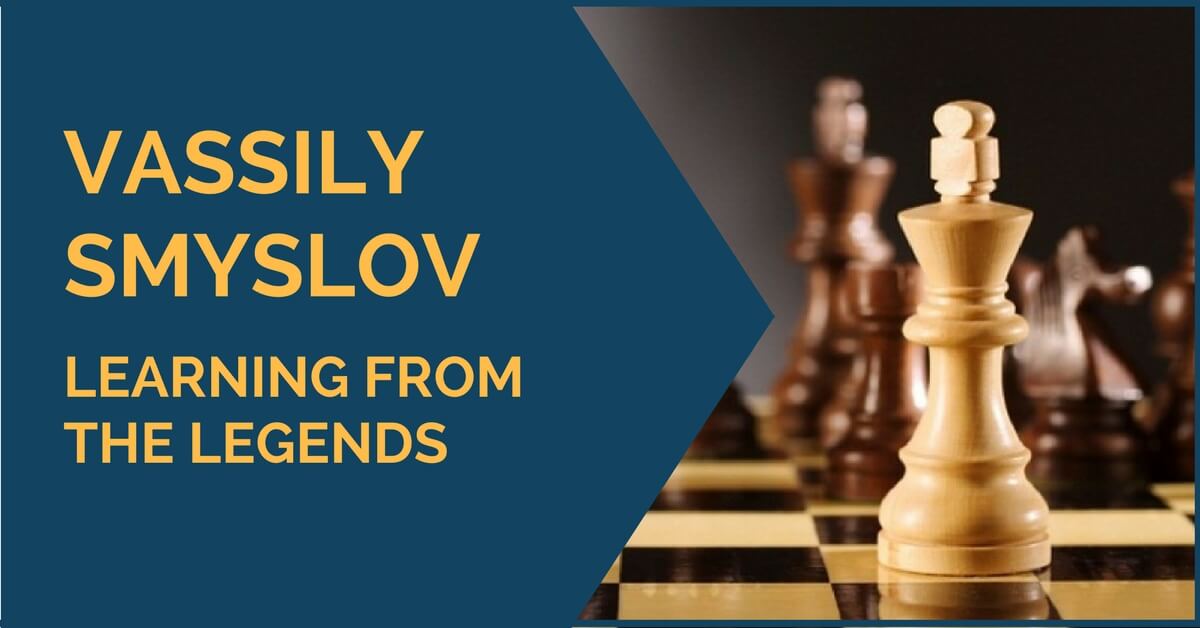 We always tell you how important it is to study not only opening and only solve tactics, but also give a study the classics. If you don’t know where to start, in this article we are going to present you another heavy name in the history of chess – Vassily Vasilyevich Smyslov. We have selected three of his many games that show only a few things that you can learn from this great player.

Smyslov first became interested in chess when he was six. His father, who himself had played and studied chess with Mikhail Cigorin for a short time, was the boy’s first teacher.

He also studied every chess book and magazine that his father had in his library, starting with Alekhine’s “My Best Chess Games 1908 – 1923”. His first appearance in competitive chess was at the age of 14 and won his first Junior Championship at the age 17, in 1938. In 1940 he finished third in the USSR Championship, ahead of Mikhail Botvinnik.

In 1948 he was one of the five players selected for the World Championship in order to determine Alekhine’s successor. He finished second, behind Botvinnik, the result that directly gave him the right to take part in 1950’s Candidates Tournament. That same year, he was awarded the title of Grandmaster. He played a total of eight Candidates tournaments in his chess career and won two.

His first match against the reigning World Champion, Mikhail Botvinnik, was played in 1954 and ended in a tie, which gave his opponent the right to retain the title. However, he won the second match against Botvinnik in 1957. One year later, Botvinnik won the title back after exercising his right to a rematch.

In team tournaments, he represented the Soviet Union nine times at the Chess Olympiads and won a total of 17 medals (an all-time record!) – 8 individuals (out of which 5 were gold) and 9 team medals. He also showed good results at many other prestigious tournaments such as Dortmund, Mar del Plata, Capablanca Memorial, etc, before he completely retired from competitive chess in 1991 due to his failing eyesight.

The ex-World Champion was well-known for his great positional style. He had a great endgame technique and a very good strategic sense but didn’t fail to deliver spectacular tactical shots as well when given the opportunity. He had a wide opening repertoire and had an enormous contribution to the chess theory in many openings, some of them being the English, Grunfeld, Sicilian, Ruy Lopez, King’s Indian Defense and the Slav.

Trivia: Did you know that Smyslov was also a baritone singer? He decided to pursue his chess career in 1950, after failing an audition. He tried to achieve the same harmony in his games, with his pieces.

We will now move on to showing you three of his games that demonstrate his extraordinary positional sense and his ability to combine it with an active and straightforward play. The first game that we chose is perfectly illustrated by Smyslov’s following statement:

“My father instilled in me a love for so-called “simple positions“, with the participation of only a few pieces. I was able to gain a deep feeling for what each piece is capable of, to sense their peculiarities, their strength and importance in various different situations on the board, the limits of their capabilities, what they “like” and what they “don’t like” and how they behave…

Such a “mutual understanding” with the pieces enables a player to see that which often remains concealed to purely logical analysis. It is then that the innate ability of a player, which I call a sense of harmony, manifests itself. ”

The next game shows how to handle positions with the isolated pawn. Smyslov combines the usual plans in such positions and continuously puts pressure on his opponent, scoring an important win over another ex-World Champion, Anatoly Karpov.

Finally, we have chosen a game that shows the “easiness” with which Smyslov seemed to play every game and convert the slightest advantage.

“He mastered all elements of play. Smyslov was a brilliant endgame specialist; all in all his play resembled a smooth flow, like a song. When you look at his games, you have that light feeling as if his hand is making the moves all by itself while the man is making no effort at all – just like he was drinking coffee or reading a newspaper! This has the feel of Mozart’s light touch! No stress, no effort, everything is simple yet brilliant. I like this feature of Smyslov and I am fond of his games.” – Vladimir Kramnik

Great article! I recently started looking at Smyslov’s games and it seems nobody talks about him much these days. That is a shame as his style is a great one to emulate as it seems he plays very clear chess and I learn a lot from his games!

thanks for this extraordinary article sir you are the best i the world.