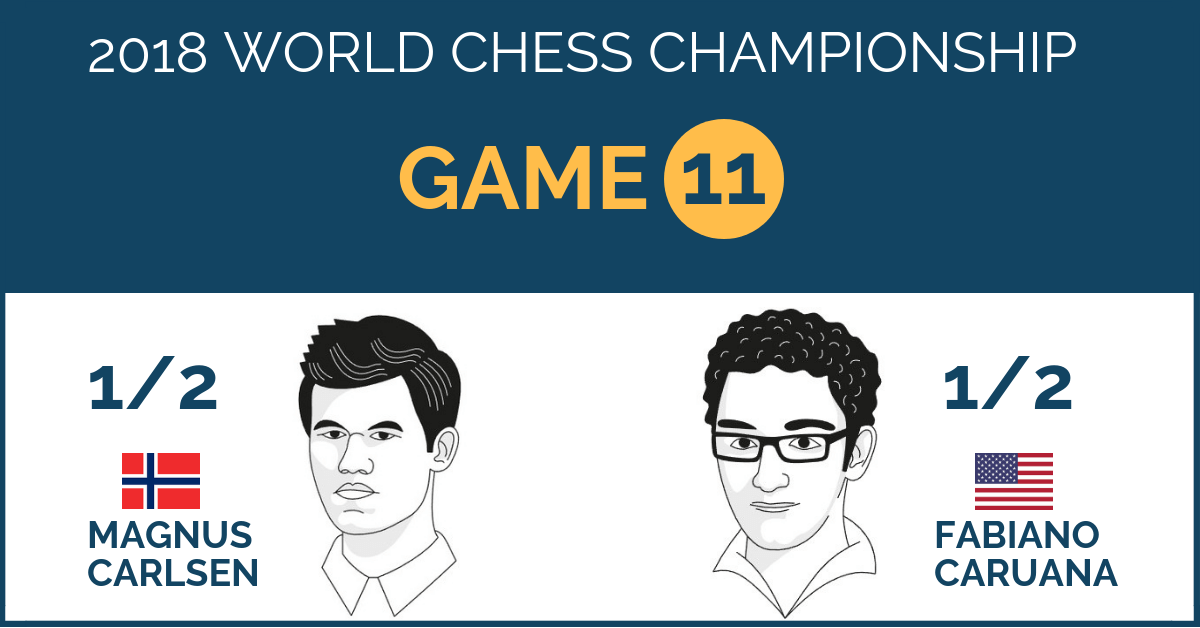 Today was the last white game of the World Champion so many expected him to push for a win. Sadly it was the most boring game in the match. Carlsen’s opponent from 2016 Sergey Karjakin made the first move and he took everyone by surprise, didn’t even ask Carlsen and just played 1.b4.

Carlsen went for 1.e4 and Caruana replied with Petroff opening. As usual, his preparation was better and he quickly neutralized his opponent.

Soon the queens were off the board and the game was a dead draw long before the finish. 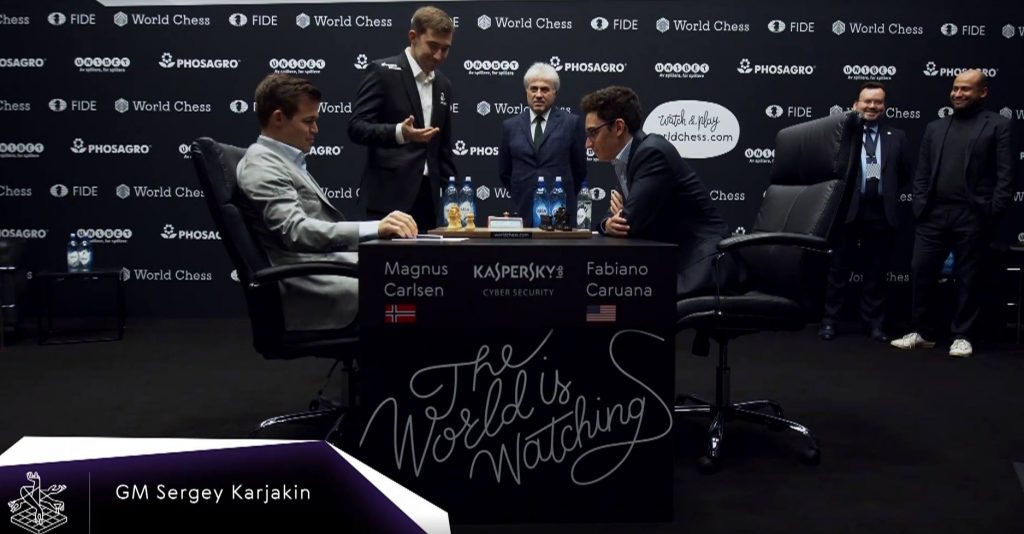 Game 11 also reminded of the last match game in New York, two years ago, when Carlsen went straight for the draw, being confident in his rapid/blitz skills in the tiebreak.

I tried to spice it up with 1.b4, but Magnus Carlsen was boring today! And thanks to Anand who also suggested me 1.b4!

A lot depends on what he wants to do. If he wants to shut it down, that’s fine by me, we’ll play rapid. Otherwise, we’ll have a fight. I’m not thrilled, obviously. I’ve got surprised in the opening and I decided to shut it down. It wasn’t great but it’s no disaster. Now I’ll just have to play well in one more classical and then see what happens. When I play something in the opening, he plays fast, I think and it’s a draw—then that’s usually not perfect.

He’s been very well prepared so far and I haven’t gotten much, those are the cold, hard facts.

I won’t go crazy but I will try to put pressure on him. Not much really happened today. I was a bit surprised by 15.Nh4.

The American GM was asked whether, before the match, he would have preferred having just one game as White for the world championship, but the answer was no.

I want to enjoy the process of it. I would feel kind of bad missing the first 11 games of the match. It’s a normal situation [I’m in now]. It’s not a bad one at all.

What can say? It’s going to be a tough game. At this point, the tension is at its peak. If I knew what would happen I would tell you.

Carlsen noted the difference with game 12 in New York, when he had White: “Psychologically it’s different obviously. We will see what happens. I would prefer to be White.”

I think this is one of the best matches in recent years, in many years,” he said. “I see a lot of ideas. I know people will be really shocked to hear that!

Magnus needs to invent something new to be the strongest again. Carlsen was stronger when I played him. And Caruana has a better team around him.

I think actually the system should be changed. I think matches like this are possible but my suggestion is if you want to see a very big fight then we should play something like 13 games with one player plays seven games with White and the other player plays six, but the player who is playing White he needs to score +1 and if he doesn’t the player who plays more games with Black wins.

Let’s hope the last game will be more interesting and someone finally wins. If not, we will watch rapid games.