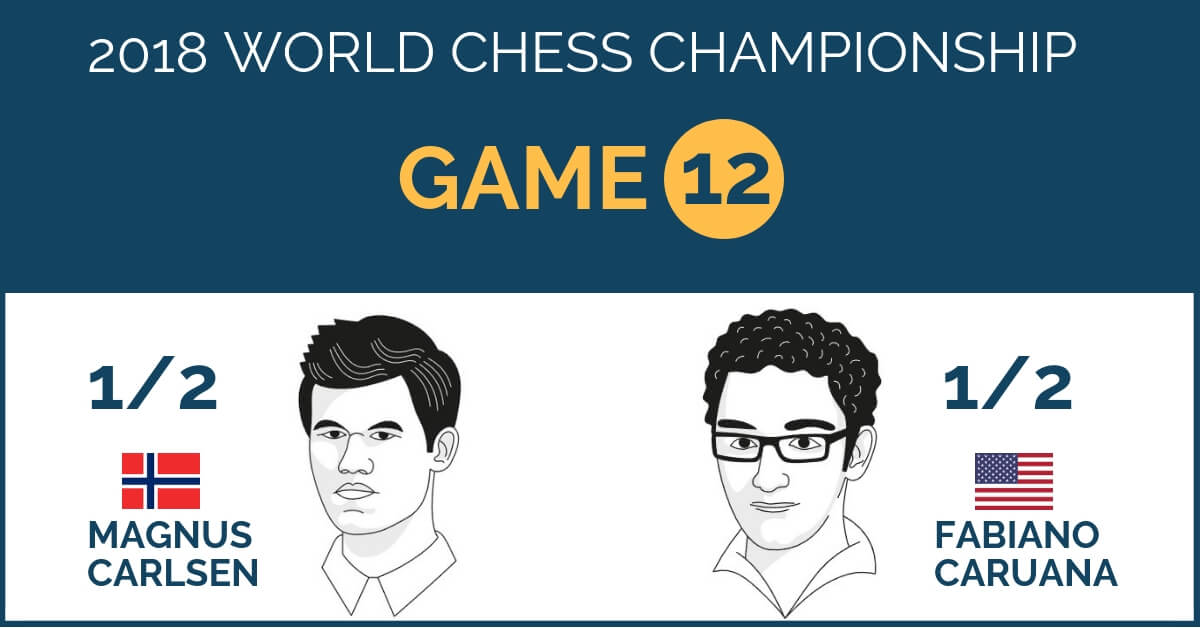 The 12th game finished in a draw and the score is level after the regular twelve games. The tie-break will be played on November 28th. The first symbolic move in the 12th game was made by Aldo del Bo, Head of Global Partnerships and Sponsorships of Kaspersky Lab, in presence of FIDE President Arkady Dvorkovich.

Carlsen played 1…c5 and Caruana went for the main lines. Who would have thought before the match that we will have six Sicilians?

The World Champion decided to deviate with Ne7 and then everybody hold their breath as there was a chance for repetition and quick draw. But, Caruana decided to play and we had a game.

Few moves later the American started to play some strange moves and with simple moves, Carlsen started to build the initiative.

Then with time running fast Carlsen have activated all his pieces and white did not have any counterplay.

And when the World Champion just needed to take on f4 and play b5 with the very big advantage he decides to close everything with e4 and a5. Still, he was in a better position with much more time on the clock!

Then came the shock, World Champion offered a draw.

Here is what happened in Game 12:

At some point, Magnus had a lot of possibilities but he wanted a draw, and he never really switched gears.

In light of this shocking draw offer from Magnus in a superior position with more time, I reconsider my evaluation of him being the favorite in rapids. Tiebreaks require tremendous nerves and he seems to be losing his.

It’s a shame for Black to offer a draw in such a position!

Kramnik on the draw by Magnus “as a human, as a World Champion, this is simply not allowed! I would not sleep for one month!”

…I have no comeback to this. I think this is the right note on which to end this show… so that is the last thing that people remember.

Considering that Caruana has exhibited generally superior skills in all facets of the match (opening preparation, middle game transition, endgames) it would seem a bit odd if he loses this match.

The Najdorf player inside me is still hurting 3 hours after this premature draw offer.

This is one of the more disappointing endings. It seems that Carlsen lost his ability to calculate and he also lost his nerves. Carlsen’s legacy has suffered a great deal. I cannot say 100% but most GMs would never offer a draw with Black, which has very little risk. This is simply shocking! They do not care about styles to please the fans. Carlsen came into this game wanting a draw. He offered to repeat early on. Caruana refused. Then he offered a draw in better position + more time! Based on statistics, Carlsen is the favorite in faster time control. But after his mindset & clearly fragile nerves, Caruana may surprise him, especially now that he’s just given a new chance. I can’t imagine any World Champion, male/female, would offer a draw in that position.

Carlsen saying he was “not in the right mindset to go for it”.

Carlsen asked by @StefanLoeffler about his +2 advantage if he had played b5: “I don’t care” – Carlsen says he was not too impressed with his a5-a4 the Norwegian collective looking at Sesse showing -1 ish and collectively in shock, he seems to have underestimated Qb4 but this is all about the tension.

My opinion is that he wanted to make a draw before the game and he could not force himself to play for a win. But the position was very good and without any risk. He played few games ago dead draw for few hours but looks like he is also human and his nerves are not so great.

After a few days ago the Women World Champion was decided with tie-break now we have it again.