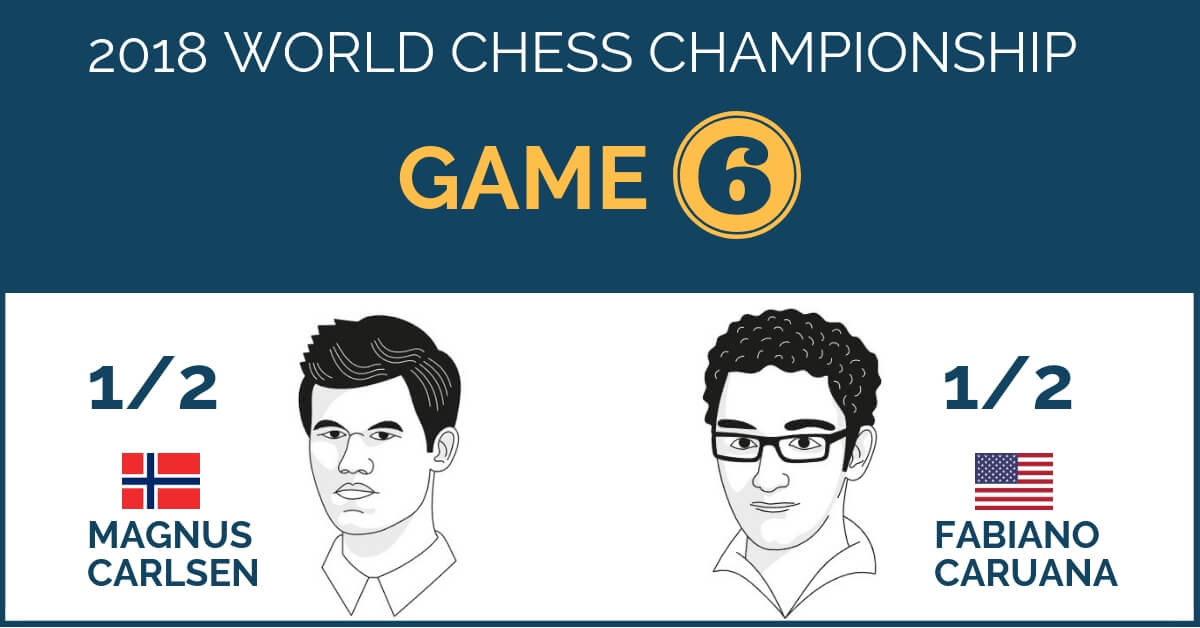 Game 6 ended in a DRAW. Carlsen played 1.e4 – Petroff Defense and Fabiano equalized pretty easily. Next, the thriller began. Magnus was playing below his potential, underestimated few moves and got himself into serious trouble. Around move 60 he had to put all his creativity into play and build a fortress saving the day. Although, Fabiano still had winning chances as computer found MATE-IN-30 in one instance. This game proves that even draws can be VERY exciting. Tomorrow is the rest day, the action will resume on Sunday! – Ed.

Initially, the game looked very exciting with both players dancing with the knights. But then Queens went off early. All went with a quiet symmetrical opening… some would say another dull Petrov. Just to admit that I don’t have relation to the name of this opening.

And it turned into a marathon fight of 7 hours, punctuated with a miraculous save by Carlsen. He should make a mental note to himself. No more 1.e4 against Caruana! No more Petroff! For sure his team already made this note. This game must be a huge disappointment for him. A missed opportunity and the American will gain confidence.

Here is what happened in Round 6:

Incredibly impressive performance by Caruana today, outplaying the World Champion in an equal Petroff is simply remarkable. The 6.5-hour 80 moves Round 6 game ended in a draw.

This time, the candidate was the one pressing.

Magnus Carlsen was outplayed for most of the game by Fabiano Caruana and at one point staring down the barrel of a computer-aided mate, but he survived with some brilliant defense!

The match is tied 3:3 at the halfway stage.

Caruana played a fantastic game, with computer precision. Carlsen has a lot to think about, not being able to take advantage with white for several games is not a good sign for him. Caruana, on the other hand, should be very happy with his performance, despite the missed opportunities.

It’s not been what I expected. Game 1 was what I expected this match to be like… I honestly felt the entire thing would be something like that, but since then we’ve not really had anything like it.

Carlsen when shown the mating move: “I’m not going to disagree with the computer, I just don’t understand it.”

Magnus on his piece sac:

As a matter of fact that was the 2nd time in the game I’d missed the plan with Ba3. I thought I’d actually have 3 pawns, not 2 pawns, so I thought it would be a fairly straightforward draw, and  when it turned out I only had 2 pawns I was quite worried… I just got way too casual.

Nakamura on Carlsen’s save: “Unreal. Most unbelievable draw by him.”

Grischuk: “I would never even dream about Bh4.”

Grischuk on Caruana’s play: “It’s the first game that he played like a World Champion here”.

On the other note Former World Champion Vishy Anand weighs in on the training camp video:

There’s nothing that dramatic that they gave away, except that you confirm that you’re looking at the Petroff…completely useless information…

With 6 draws so far, we have to wait a bit for the first decisive game in this match.