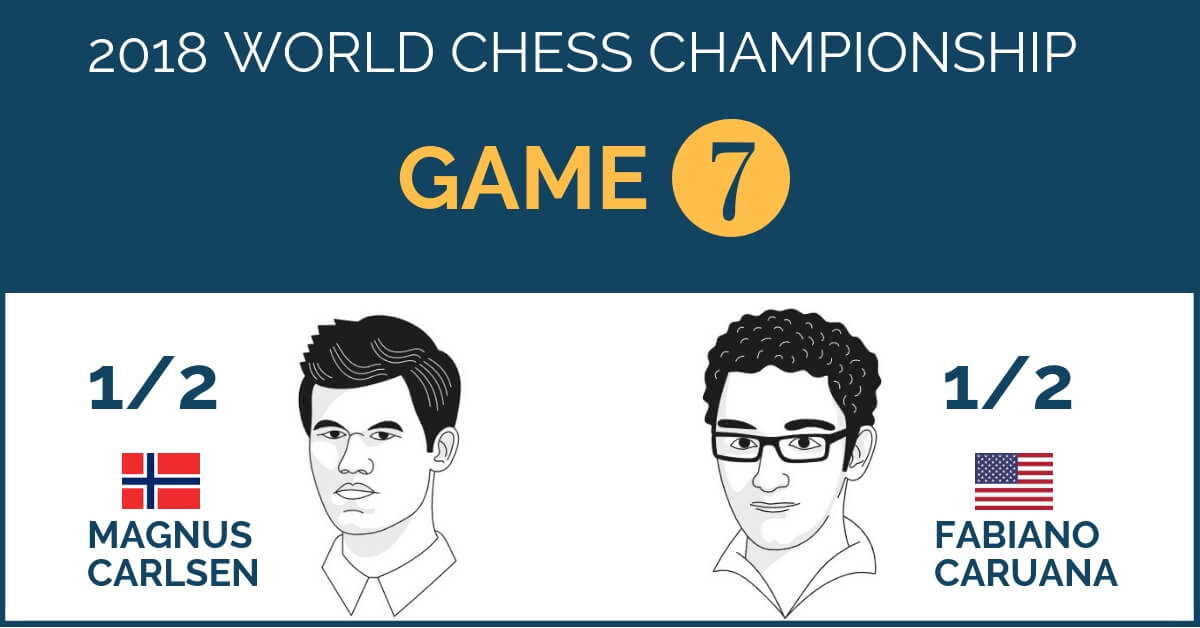 Game 7 was seen as very important as this was the second white game in a row for the World Champion and it was expected he will find a way to have a better position from the opening and push for a win. But  Carlsen again makes no progress with white against Caruana. He repeated the line from game 2 and then deviated with Nd2 instead Rd1. But instantly Caruana went Qd8 and just like Rd8 in game 2 again the World Champion was surprised.

Grischuk even said his opening preparation is childish.

Then instead to put some pressure with Rd1 he played very soft moves like Be2 and later Bg5. Caruana had a very safe game today.

Then pieces were traded very fast and we had another endgame. This time the change was that the Queens were traded a bit later only but the outcome was the same.

Let’s analyze the game 7 together:

Svidler commented after the game:

The only danger here is if Caruana thinks the game is over and they just need to make 5 more moves, and Carlsen thinks it’s only just starting – you could lose concentration.

But Caruana defended perfectly. The g2 pawn was the counterbalancing factor which held White back.

Viswanathan Anand on Carlsen’s comment about preferring his 2014 self:

What is striking is the number of [good] positions he doesn’t convert [nowadays]. He used to win equal positions! Magnus is one of the guys who find the difficult stuff easily. It even seemed simple to me, I wasn’t looking with an engine, and it didn’t seem to be particularly difficult. It was a miss.

I knew the move exists, but I just didn’t expect it. What I did was way too soft. I had only one chance to play actively with Kce4 instead of 0-0. Later I was hoping to outplay him in the ending knight against bishop but I could not. Unfortunately, it was another wasted white game.

Caruana commented on this game:

I played carelessly in the end and he had some pressure but still, it was a draw without too many problems and it is a good result. In game 6 I think I played very well, maybe in that position if they tell me to find a win I could but if I don’t know it is a win no chance. Carlsen told also the same thing as Kasparov 2 days ago about that computer possible win.

After the first game, we haven’t many chances to win and there are no big blunders so it is natural to make 7 draws. I adjusted to the match, at the start I was unused to it and in some of the games my play was suffering but now I feel used to the pressure.

Good result for Fabi to get two potentially tough consecutive black games behind him. Time to ask the boys if there is finally any news in the Rossolimo. Or maybe it is time for some change in the openings, perhaps 1.d4?

Carlsen-Caruana Match has now started with 7 draws, just as in Carlsen-Karjakin in New York in 2016!

Magnus extends his drawing streak to 12 games – his longest ever.

“I don’t think I’m rooting for anyone in the match. I just want an interesting match, I like both of them.” I would be really depressed if the match went 12 draws.” – Maxime  Vashier Lagrave.