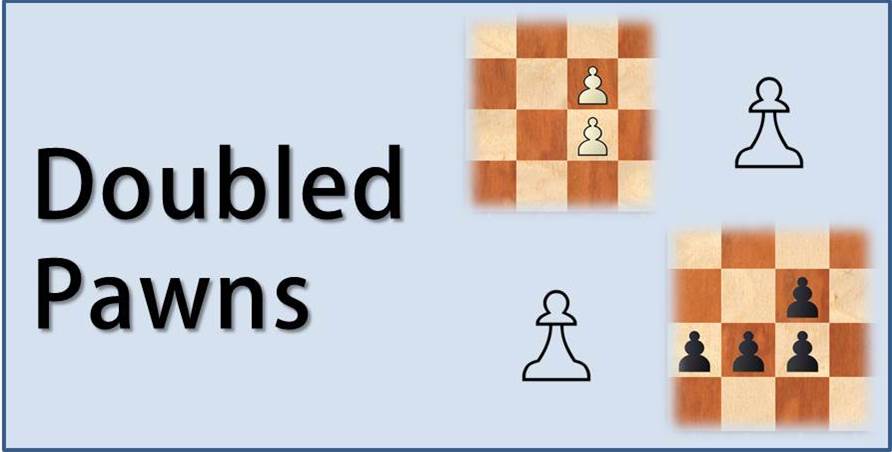 Whichever the case, they can be a weakness in our position and become a possible target. At the same time, they can open up our pieces (for example create an open file for the rook), making them more active. It is, therefore, equally important to know how to attack such weaknesses, if playing against them, and how to use the doubled pawns as a weapon, if you decide to enter this structure.

Note: In order to develop a positional understanding and start winning middle game positions it is necessary to go over the annotatedGM chess game, and to think why certain moves were made. Only when you put yourself in the the player’s shoes you will be able to fully understand the problems he was facing in the game and your will be able to improve you own chess. That’s exactly what you can do by studying our training course.

We will try to help you understand this type of positions by laying out some relevant features and showing you some examples of correct play. Let’s see first when and why this structure is particularly weak:

Keeping in mind the ideas presented above, let’s have a look at some examples of how to play against the doubled pawns.

The first game shows a very instructive play by Dreev against the central doubled pawns. He uses a very basic idea in the structure we are studying – doubled pawns become weak in the endgame. Limiting black’s activity and neutralizing any counter-play, he forces his opponent into a worse endgame. Then, he starts pushing his queenside pawn majority, creating more weaknesses in black’s camp.

Black is slowly forced into passivity. Only after placing his pieces on ideal squares, white delivers the final blow by opening up the kingside, leaving black’s position helpless. This example is a clear illustration of why playing against the doubled pawns can sometimes be considered as having an extra pawn.

The second game is an example of another common plan used against the doubled pawns – exploiting the weak squares created around them. In order to kick the white pieces out, black is forced to move his pawns, only to create different weaknesses on the queenside. After successfully achieving this, it is time to use a plan we have discussed before – always create targets on both sides of the board. White plays accordingly, focusing his pieces on the kingside, creating one more weakness and fixing it before starting the attack.

After studying the games above, we can extract the main plans used when playing against the doubled pawns. The first and most frequently used is turning the game into a better endgame, when it is easier to attack and capture the pawns. Secondly, it is very important to use our pawn majority, fix the opponent’s structure on the other side of the board and convert the advantage by achieving a passed pawn. Another usual plan is maneuvering on the weak squares created by the doubled pawns and gain more space.

These ideas, combined with always improving your position and looking for new targets to attack, can help you find the right plan when dealing with this type of structures.