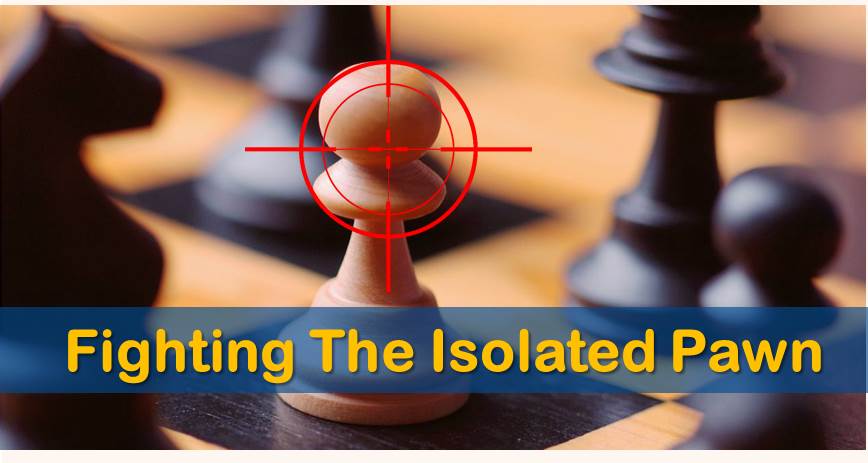 A while ago we have shown you the advantages of the isolated queen’s pawn, the ideas and plans you can adopt when finding yourself on the side having such a structure. However, as everybody knows, an isolated pawn represents a weakness that should be exploited.

Like most of the times in chess, the concept of the isolani being a strength or a weakness depends on many other factors such as piece activity, better piece coordination or, in this particular case, the lack of pieces on the board.

First of all, let’s take a look at the most common plans used against the isolated pawn:

The isolated pawn is, or may become a weakness in the endgame; that means that exchanges always favor the side playing against it. It doesn’t mean that playing against an isolated pawn in the endgame will automatically bring you the win, as your opponent may find ways to defend, but it usually gives you a great advantage and increases your winning chances. In the king and pawns or minor pieces endgames there are several things that make this structure difficult to play with.

First of all, the isolani usually requires protection. This means that your opponent’s king or minor piece will be tied up to its defense, thus becoming passive. Secondly, the square in front of the pawn is difficult to control for the side having the isolated pawn and it may be used to make your own pieces more active.

Sometimes, the isolated pawn could be a passed pawn but, even so, advancing it is not easy, as your pieces are usually more active. When talking about major pieces endgames, the passivity of the opponent’s pieces usually represents an even greater advantage. In this case, you should use it in order to create a second weakness, as the defender’s pieces may find it difficult to keep everything under control.

Keep the square in front of it under control

One of the main ideas of the side having the isolated pawn is to create a pawn rupture in the center by advancing it and activating his pieces. Because of this, our pieces should concentrate on keeping this square under control. It is not necessary to occupy it, but to prevent our opponent’s ideas.

Focusing only on attacking and winning the pawn may not always work. However, putting pressure on it will make your opponent’s pieces passive and less mobile, while your pieces can easily get from one flank to another.

These are the most important ideas that you need to keep in mind when playing against the isolated pawn and we are going to see next how Grandmasters use them in their own practice.

We are going to start with a game of the ex-World Champion Anatoly Karpov against Viktor Kortchnoi. Playing black, he started by forcing a few exchanges and, taking advantage of his opponent’s mistakes he took the game into a major pieces endgame. By increasing the pressure over the isolated pawn, he forced white to create a second weakness, on his king, which he went on to exploit in order to win the game.

The next example has Karpov on the losing side, against Gelfand. The isolated pawn resulted from the Queen’s Indian where Gelfand, with the white pieces, had good control over the d4 square and was ready to put pressure on the d5 pawn. After some exchanges, he reached a superior endgame where, in order to win, went on to create a second weakness on the queenside.

In the last example we can see how the side playing against the isolated pawn can try to play for a win in an apparently equal endgame. After reaching a rook and minor pieces endgame, Jussupow, playing as white, stopped trading pieces and started to improve his position and create a second weakness. The game could have been drawn with correct play, but white was always the one with better chances.

In conclusion, the plans used against the isolated pawn are fairly simple. The most important is fixing the pawn and forcing the trades. However, pay attention to the trades and always choose the ones in your favor! Then, in order to play for the win, a second front is usually needed. Good luck!