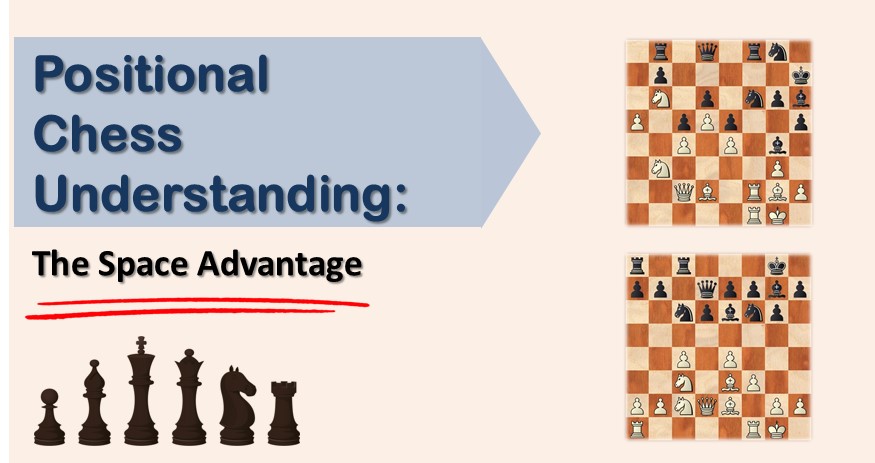 A very common element in chess is the concept of SPACE. Very often we hear masters talking about the importance of space in today’s chess. Along with the concept of the bishop pair, the concept of space advantage has become one of the most important factors when it comes to evaluating positions and making decisions in the opening and middlegame.

Not everything is as simple as it sounds, and just the fact that one side has more space doesn’t necessarily mean that is also better. Sometimes the spatial advantage is confused with over-extension, something that we will have a look at in this article as well. There are several different ways to obtain more space on the board. The most common is defined by different kinds of pawn structures, advanced into the opponent’s territory.

Another way is to gain space with the help of our pieces. In this case there aren’t many pawns in the center for example, but one side’s pieces exert so much pressure on a certain area of the board, that the other side must stay cramped in a limited territory.

In the above diagrams we see some common positions from well known openings like King’s Indian, Spanish, and Catalan in which the pawn structure gains considerable space on the enemy’s camp.

Here the positions are different, and we can see that it’s not the pawns that give the space advantage, but the pieces, which control several key squares in the enemy’s camp, keeping them restricted.

How to employ the space advantage to our benefit and what are the main concepts to remember?

There are a few concepts worth knowing, we have resumed them into these:

Gaining space is a legitimate goal in the opening and middlegame, but beware! Do not over extend! What does this means? Sometimes, in the quest for space, one side tends to advance too many pawns, leaving weakness behind or not being able to support this advances with pieces. As a result, the opponent will find counterplay by executing pawn breaks or sacrifices. It’s a common factor in ”hedgehog” positions where black surrenders considerable space to white but he waits patiently for white to overextend.

In the next examples we illustrate the concepts we have explained above:

In this first game, white has a considerable space advantage out of the opening, but black is very solid. Negi uses the technique of playing on both wings in other to crack black’s position. The game is not perfect (no game is) but it shows very well the strategy to follow in this type of positions.

A typical King’s Indian struggle in which white managed to stop black’s initiative on the kingside and went on to win on the opposite flank. The middlegame fight is very interesting, with white switching from one side to the other.

This last game is a great example of how not to play when you have space advantage. Instead of controlling black’s counterplay, white deliberately went on to grab more space and all of a sudden found himself under a very strong counterattack.