Typical Sacrifices in the Sicilian: The Knight Sacrifice on f5 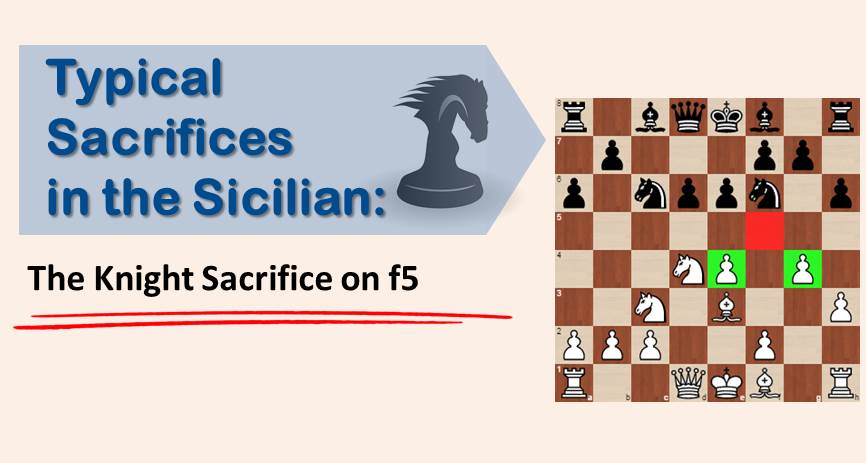 Continuing our series of typical sacrifices, today we are going to discuss another very important and usual idea in the Sicilian Defense. Much like its brother, the piece sacrifice on d5, giving up the knight on f5 has more or less the same ideas and outcomes.

The point is ruining black’s pawn structure and open up the files in order to start an attack against the uncastled or, in this case, even castled king. The two sacrifices bear many similarities and, if you already know the main ideas of Nd5, you won’t find giving up the knight on f5 too difficult to execute either.

Let’s see, for starters, the differences between the two typical moves in the Sicilian:

Now that we have mentioned the usual ideas that you can when sacrificing the knight on f5 in the Sicilian, let’s take a look at a few Grandmasters games.

The first one was played between the Cuban Grandmaster Bruzon Batista and the Romanian (now playing for Spain) veteran Suba. In the Sicilian Scheveningen, white chose the very aggressive plan with 6. g4 and castled long quickly, while black’s king remained in the center. As we mentioned before, the presence of the e4 and g4 pawns, both controlling f5, is a great indicator of a possible knight sacrifice on this square. See how white continued his attack in the game below:

In the next game, we will see the sacrifice against the uncastled king, when accepting the knight on f5 would open up the light squares bishop and completely damage the king’s safety. In the game, black didn’t capture the piece back and the white won thank to the dominance on the dark squares.

The last game is another win by Rublevsky in the same variation, only this time black chose to castle. With his Queen on g3, he started putting pressure on g7 and opening the rook on e1 and the diagonal for the bishop on b3 proved to be decisive.