When a Bishop is Better Than a Knight 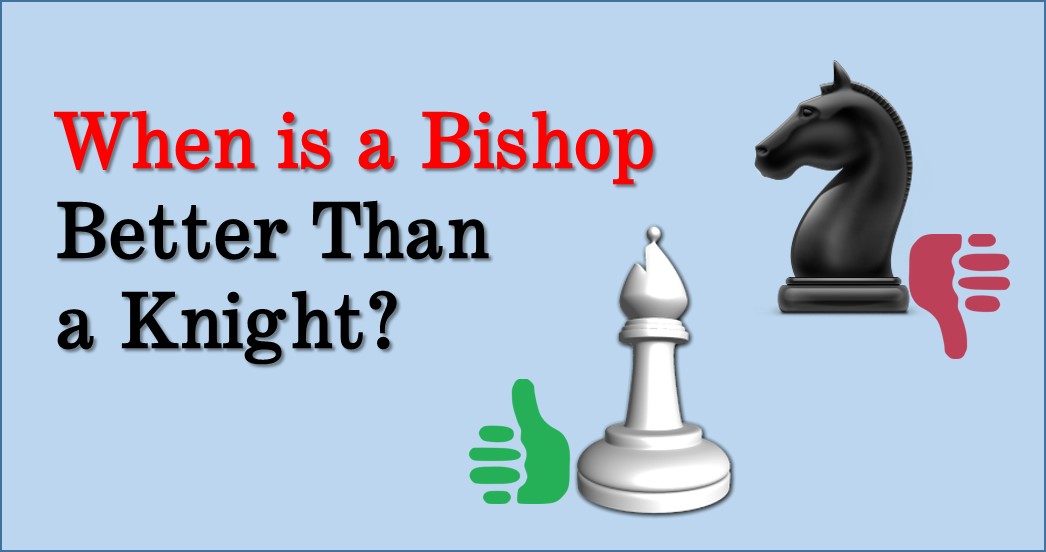 Continuing our series of strategical elements, we are now going to discuss those positions in which we must choose between keeping a bishop or a knight on the board. There is no established rule that can tell us that a bishop is better than a knight or vice versa. It all depends on the characteristics of each position and the functions that each of these pieces can develop. However, there are a few concepts that can help us identify when one minor piece is superior to the other.

The bishop is better than the knight in the following cases:

First, we are going to look at the game Fischer – Taimanov, game 4 of the Candidates Match played in Vancouver, 1971. It’s a very well-known example in which we can appreciate two things: the rook and bishop battle against the rook and knight and how the bishop is superior when there are pawns on both wings.

In the second game, we will examine a position where the knight has no outpost in the center. In addition to this, white has a clear space advantage and a more active king. We can see how black struggles to find a secure square to place his knight and how white uses his space advantage to create targets on both sides, which led to a winning position.

Note: In order to develop a positional understanding it is necessary to go over the annotated GM chess game, and to think why certain moves were made. Only when you put yourself in the the player’s shoes you will be able to fully understand the problems he was facing in the game and your will be able to improve you own chess. That’s exactly what you can do by studying our training course.

Our third example is a very instructive bishop versus knight endgame in which black has a kingside pawn majority. Black develops his position by first creating a weakness on the side he has advantage on. Then, he activates his king by bringing it to the center, supporting the advance of his central pawns. Later, the role of the king becomes decisive on the queenside. White is not able to defend against the simultaneous threats anymore.

This final game is an example of an endgame with pawns on both wings. By employing a central rupture, black opened the position and created targets on white’s kingside. White found a defensive resource by creating a passed pawn on the e file that worked as a distraction, making black’s task difficult. Despite having lost the game, white could have held a draw with precise play. However, it is a perfect example of how this type of endgames develop and what techniques can be used in order to create difficulties for your opponent.

We hope to have helped you improve your strategic skills and understanding of the basic concepts that you must know in this type of positions. Mastering this technique could be very useful in your tournament games, since it is a very frequent theme. Not in every position a bishop is better than a knight, but, the ideas and examples shown above can give you some criteria to evaluate the position and choose a correct plan.

Note: MIddle-game is no doubt a very important part of chess. If you want to improve your general chess level simply working on the middle-game is not enough. If you aim for a dramatic improvement at chess you need to work on all of the elements of the game in a systematic way: