Grunfeld Defense: 10 Reasons to Play It

Grunfeld Defense is one of the most dynamic and sound chess openings. It starts after the moves 1.d4 Nf6 2.c4 g6 3.Nc3 d5, when Black opens files and diagonals for their pieces to target White’s center. This unusual system of development started gaining popularity in the 1920-s. It happened after Ernest Grunfeld successfully employed it at the highest level, beating Alexander Alekhine. Later, Alekhine even used it himself. Nowadays almost every top grandmaster has the Grunfeld Defense in their repertoire.

Are you seeking an active weapon against 1.d4? Look at 10 reasons why you should play the Grunfeld. 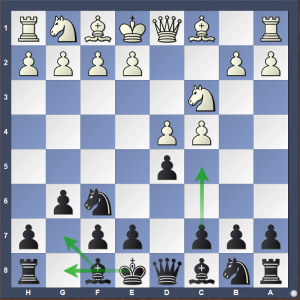 1.  Hard to get an advantage against the Grunfeld Defense

This Opening is one of the most theoretically sound openings. It has been the most difficult opening to get an advantage against for decades. There was even a story about a grandmaster who retired from chess. It happened because he got tired of thinking about what to do against the Grunfeld Defense!

2.  This opening is the choice of the champions

The Grunfeld Defense has been consistently played by many outstanding players at the highest possible level for many years. Garry Kasparov played it in the World Championship matches against Anatoly Karpov and Vladimir Kramnik. Many top grandmasters play this opening almost exclusively: Maxim Vachier-Lagrave, Peter Svidler, Ian Nepomniachtchti.

The Grunfeld Defense is a hypermodern opening. Instead of controlling the center with pawns, Black allows White to occupy it, and then attacks it with pawn breaks and active pieces. White has to play carefully to maintain the center and not enable Black to take over the initiative. Handling such positions is not everyone’s cup of tea.

4. This opening is great for dynamic players

In most cases, Black should play actively. If you are a dynamic player and prefer creating threats over defending passively, this might be a good opening choice for you. If you are not used to playing actively but would like to change it, trying the Grunfeld Defense could be a good idea as well.

It is hard to get bored in the Grunfeld. The positions often get messy and interesting to play. One notable example is ‘the game of the century’, which started with this opening.

Here is a Quick Guide on Grunfeld, if you are interested in learning more about the opening of Champions.

6. This opening leads to favorable endgames

A handful of the Grunfeld variations lead to a pawn structure. In that case, Black has two pawns on the queenside against only one White pawn. This typically plays a huge role in the endgames.

It allows Black to create a passed pawn on the queenside and makes their chances pretty high.

7.  Grunfeld allows you to use your tactical abilities to the full extent

Tactics appear naturally in the Grunfeld Defense. The arising positions are not blocked while the pieces are active. It is not one of those openings that lead to dry and boring positions or where you need to sit and wait calmly.

8.  Grunfeld allows playing for a win

Many factors allow Black to play for a win in the Grunfeld Defense. There are unbalanced positions, tactical possibilities as well as active pieces. Of course, no opening gives Black an advantage if White plays correctly.

But here it is much harder for White to play correctly than in a calm opening.

9. This opening will be useful in the other openings

The experience in the Grunfeld Defense will help you in the Catalan positions from White’s perspective. The openings like the Reti, the English, the King’s Indian, the Benko Gambit, and others are also quite in the spirit as well.

10.  Grunfeld Defense is playable at any level

You can play this opening at the club level as successfully as at the grandmaster level. Many players consider this opening as heavy-theoretical. But, below a master level, you will not need to know every detail.

The ideas and plans are quite easy to understand. Black’s play is usually direct and clear. White has a lot of different ways of meeting the Grunfeld Defense. But, Black reacts to them all in a more or less same fashion.

Don’t expect your opponents at the club level to know much theory against this opening.

Ready to Include Grunfeld into Your Repertoire?

Make sure you know this opening inside out with IM Marcin Sieciechowicz’s new course Grunfeld Defense for Black — a 10-hour video training where he shows you how to play the Grunfeld like a pro, equipping you with the typical plans, pawn breaks, and positional strategies for both sides.