10 Reasons to Play the Sicilian Dragon 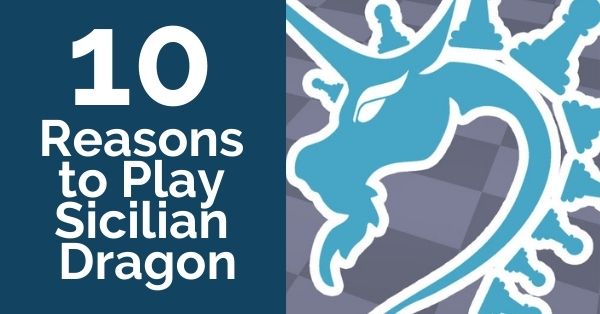 Sicilian Dragon: The Sicilian is one of the main weapons for black against 1.e4. It is known as a fighting opening, which can lead to sharp play and sharp complications in some lines. Black has a lot of set-ups to choose from, each with different characteristics and plans. In this article, I am going to present to you the Dragon variation of the Sicilian and give you 10 reasons to include it in your repertoire!

Here are the 10 reasons why you should play the Sicilian Dragon:

It’s great for players who are looking for a way to take the game into complicated, fighting positions. If you are searching for a variation to try and play for a win with black, the Dragon is a perfect choice. Compared to other Sicilian variations, here there are barely any lines that lead to a forced draw, for example. Regardless of the set-up white chooses, the resulting positions are rich in ideas, with chances for both sides.

Black’s set-up is, in general, very harmonious. In many lines of the Sicilian black has a weakness that needs protection or attention. For example, in the Sveshnikov, where black plays with …e5, the pawn on d6 is a long-term weakness. As soon as the dark-squared bishop is gone, white can attack it and even win it. The square d5 is also weak and it’s one of the points white uses to move their pieces around. In the Dragon, however, black has no weaknesses. The pawn structure is healthy and all of Black’s pieces are on good squares.

As pointed out before, the piece cooperation is very good for black in the Dragon. The bishop on g7 has great potential on the long diagonal. The knight from b8 is usually headed to c4, via c6 and e5 (or sometimes a5). It can be supported by a pawn on b5 and a rook on c8. The light-squared bishop can also support from e6 in some lines. In others, it can go to d7 and c6, putting pressure on White’s center.

Some lines of the Dragon lead to very sharp play. Generally, if white castles long, the game turns into a race where each player wants to be the first to create threats on the side they are playing. If you don’t mind complications and want to attack with black, you are probably going to like the Dragon.

You will learn to appreciate the power of the “Dragon bishop“. The great force of Black’s position, the piece that many times plays an important role in the game, is the fianchettoed bishop from g7. Regardless of where white will castle, this bishop will put pressure on White’s center and Queenside. The dark-squared bishop is a key piece for black, both for attacking and defensive purposes.

It has been played with great success by some of the best-attacking players. Among the players who have employed it, you will find Bent Larsen, Anthony Miles, Garry Kasparov, and Veselin Topalov.

7. A flexible option for Black

It is a very flexible option for black. Once you know the ideas of the Dragon, it is easy to make slight changes in the move order. If at some point you want to play the same Dragon ideas, but avoid the complications that arise in the lines where white castles long, you can try the Accelerated Dragon. This is a more solid set-up for black and it can easily transpose to some lines of the “normal” Dragon move order. The main difference that you will need to cover here is the Maroczy structure that white can opt for.

While the theory has developed a lot in this line, it is still considered a safe option for black. You should be advised though, that some lines require good memorization. In the sharper lines, it is important to remember exactly what you have to do. One wrong step in these positions can quickly lead to a much worse or even losing position.

9. A lot of poison and hide neat traps

However, the same goes for both sides. White also needs to know exactly what they’re doing in more than one line. Otherwise, you could get a winning game right out of the opening. Both the Dragon and Accelerated Dragon have a lot of poison and hide neat traps. It’s very easy for white to fall for them, especially if they don’t know the exact move order.

The theory, especially in the Sicilian, is ever developing and new ideas are found. The Dragon is rich in possibilities and you can further investigate it for different plans. It’s always advisable to keep an eye on the specialists of the opening, know the new trends and learn how they deal with them. One of the specialists in the Dragon is English Grandmaster Gawain Jones, who has already published two books on this opening.

Looking for more on the Sicilian Dragon? Here are The Complete Guide and This Opening with GM Marian Petrov [TCW Academy].

Ready to include the Sicilian Dragon into your repertoire?

Give the Sicilian Dragon a try with this brand-new training that IM Milovan Ratkovic prepared for you. You’ll get 10 hours of HD videos as well as a comprehensive PGN of all the lines you need to remember.