5 Tips for Preparing Your Openings 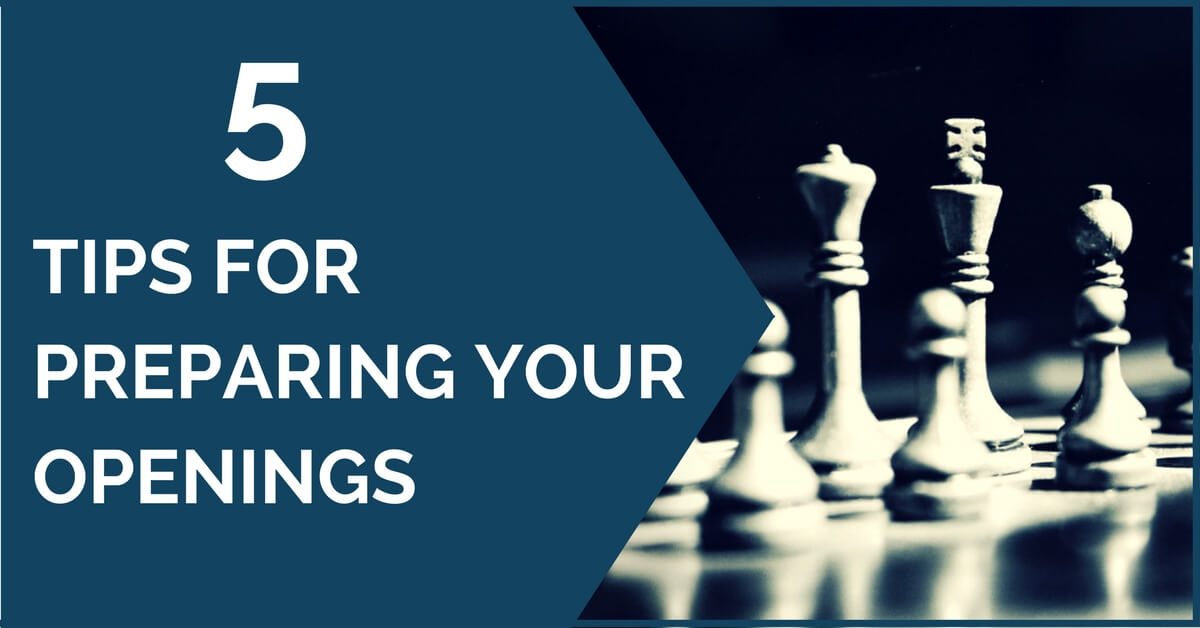 Openings and preparing them. Nowadays it is common knowledge that good game preparation plays a major role in achieving success in over-the-board tournaments. Opening preparation has become a habit for any active player and many spend an impressive amount of hours before the game trying to find the right opening idea in order to get the opponent out of the known territory.

The surprise factor is very important in chess; your opponent might not find the best plan or sequence of moves over the board. And, even if he/she does, he/she will probably use a lot of time in order to do so. You will most probably have a time advantage for the rest of the game. And, knowing the position, it will be easier for you to continue once the known theory is over.

How should you prepare for a game?

First, look up your opponent’s name in the database in order to get the list of games he/she has played over time. You can perform this search from a specific starting position. For example, you may only want to see what he/she plays against 1.e4. But, we suggest you start with all games.

Now comes the tricky part, what to do with all this information?

1. Openings: Order the games by date

Start looking at the most recent games first; it is very probable that your opponent’s repertoire has changed over time. And, there’s no use in worrying about openings played a long time ago when they haven’t been employed at all recently.

2. Play through the middlegame

While it’s true that it’s the opening you want to prepare, the middlegame will give you a sense of the type of player you’ll be confronting. You’ll know if he/she likes to attack and create complications out of nowhere or prefers a quieter, more positional play.

This will help you make the opening choice; you’ll probably want to get your opponent in positions he/she is not comfortable in and you consider your chances are better. For example, if you have noticed that your rival doesn’t like to be attacked or has tactical flaws in the games, you can try to play a sharper or more complicated type of position.

If by looking at your opponent’s games you notice that he/she scores rather bad against one specific line, it wouldn’t be a bad idea to consider playing that line yourself.

There is a high probability that he/she doesn’t feel comfortable in the resulting positions. Or, they simply don’t suit his/her style. If it doesn’t suppose learning a huge amount of theory in a short time and you notice that your rival always plays the same line, this can be a good option for the game.

4. Check your own games

It is safe to assume that your opponent will be going through the same process you are. We also know that you are well aware of the games you’ve played and the lines in your repertoire, but not all your games will be available in the database. That’s why it’s good to be well informed about the amount of information available about you and try to guess what your opponent might be going for judging from your available games.

This is also useful if you are surprised over the board (for example your opponent uses a line he/she has never played before). Remember what you’ve played in the games that are listed and play a different line than the one your opponent has probably prepared.

5. Openings: Get to know your opponent

Game preparation is not only about finding a suitable opening. It is also about understanding how your opponent plays and thinks. This is why, after you have decided on the opening, it is a good idea to spend a few minutes looking at the full games. Try to find the weaknesses, strengths, and patterns in his/her play. This will help you over the board when it will become natural to you to guess his/her next moves. You can also try to make the game uncomfortable for his/her. For example, if you’ve noticed a weak point in endgames, you can try to push the game in that direction.

We hope that these tips will be useful in your future game preparations. And, that they will help you improve your searching technique.

ouotanding article sir thanks forthe news and website on the regular basis.