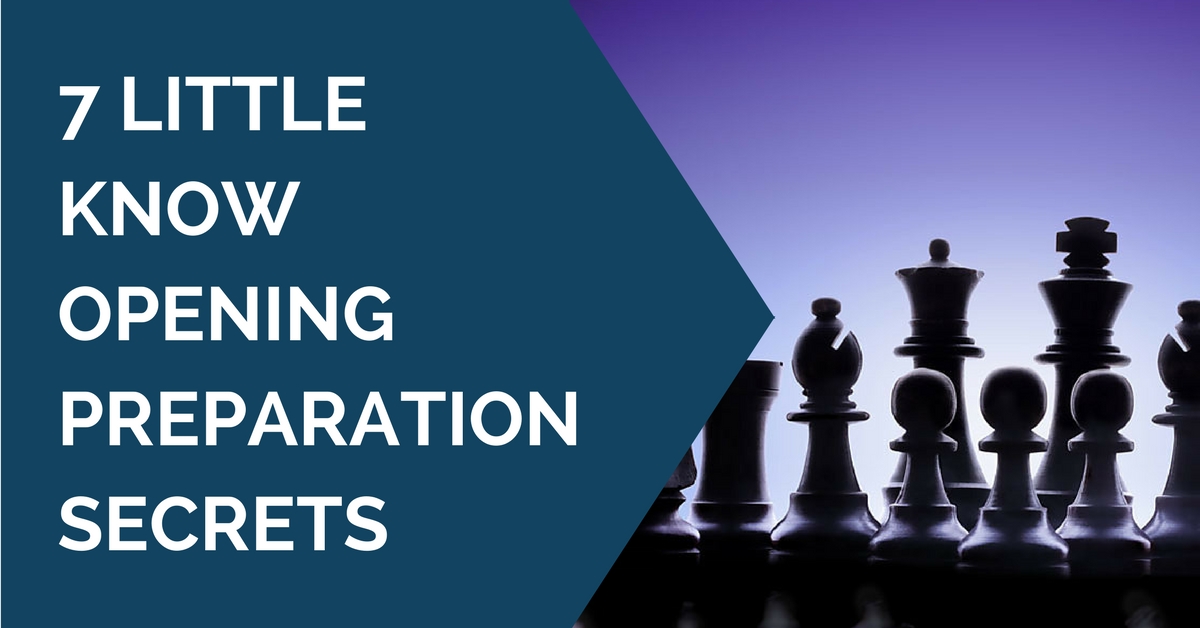 Many club players make a mistake and start working on many different openings at once. In reality, you don’t need to know many openings to stay on top of the game. You simply need to know one, but you need to know it well enough to outplay your opponents. That’s why, if you are a club player and don’t have 5-hours a day to spend on opening preparation, it is a good idea to play somewhat universal openings that can be used in various situations. That way you can focus on the opening more, and become way more proficient.

Unfortunately, the majority of club players choose to learn theory-intensive openings and due to lack of time and experience are unable to benefit from those the way stronger players do. The secret of good opening preparation is to study fewer openings and learn each and everyone better.

2. Go for the understanding, not memorization

Many club players think that the more lines they memorize the better their opening preparation will be. There may be some truth in that, but a basic understanding of what’s going on in the position is much more important than memorization.

Without that understanding, you will not be able to play the opening, because you will not know the piece placement, key squares, ideas, and plans. Even if you will be able to blitz out the “correct” moves, you won’t know how to proceed in the middlegame and why certain pieces and pawns are placed where they are.

Plain memorization only works in the case of the computer, which can spit out a 20 move sequence from an opening book and proceed with a correct plan by raw calculation. Human players are wired differently. That’s why they need to know more about the opening than just the moves.

When you study an opening I suggest paying specific attention to the following very important elements:

If you understand those four things well, you will have no problem playing the opening.

This is another “secret” that many club players don’t realize. They dive very deep into the opening theory and seem to forget the reason why they study openings in the first place. The reason to study openings is simple and straightforward: to reach a good middelgame position that can be converted into a win.

You only need to know that much to be a good player.

That means there is no need to study a sub-deviation of a sub-division on move 37. You will never see it in your games and it most likely won’t help you at getting those wins. Focus on the first 10-15 moves of the opening, briefly look at typical middlegames and endgames you encounter.

That’s it. You are not preparing for the world championship much. Everything above that is a waste of time.

Many club players know that playing too much blitz is something to be avoided. It is generally true, however, there are exceptions to any rule. This is one of them. Playing blitz for trying out openings, different ideas and variations is a good idea.

In fact, it is recommended by many strong Grandmasters and they admit to using this approach on the regular basis. Keep that in mind when you are learning a new opening, play a few blitz games, and see how the opening feels and what kind of middlegame positions you encounter. Then make a judgment on whether it is something you want to play on a regular basis.

5. Opening preparation: Keep your openings up to date

Most club players think that an opening is a “set it and forget it” kind of thing. You learn it once and can play it for the rest of your lives. In reality, it is not the case. And not even because opening theory changes and you need to keep up. In most cases, club players can use the 1900s opening preparation and win all their games.

The reason why you need to update your opening preparation is that you may notice that you go outside of the boundaries of your opening knowledge too early in the game. Simply put, you are not using the opening to the fullest of its potential. By learning a bit more theory, and expanding some lines you can get most of your preparation.

6. Get rid of what doesn’t work

Sometimes you will notice that certain lines lead to bad positions, where you struggle to equalize or even lose games. It doesn’t necessarily mean that it is a bad line. Maybe this line simply leads to positions you are not comfortable with playing. Nevertheless, you need to drop those like and find an adequate replacement.

Sometimes you will notice that some of the lines work especially well. Maybe you get some sort of stable development edge or are able to launch a winning attack on a regular basis.

Keep track of what lines perform best, and try understanding why it happens the way it happens. By working on your strengths and getting rid of your weaknesses, you will be able to take your opening preparation to a whole new level.

Looking for more on Openings? Look at the 5 best aggressive Ones as White, Complete Guide and 5 Ways to Immediately Improve Your Play.

We also recommend reviewing 5 Things to Do for Breaking 2000 ELO.

Excellent advice! Which sadly I only came to realize after decades of useless study.

Hi, George! Better late than never 🙂 I’m sure you will catch up fast!