7 Most Important Differences between Chess Master and You 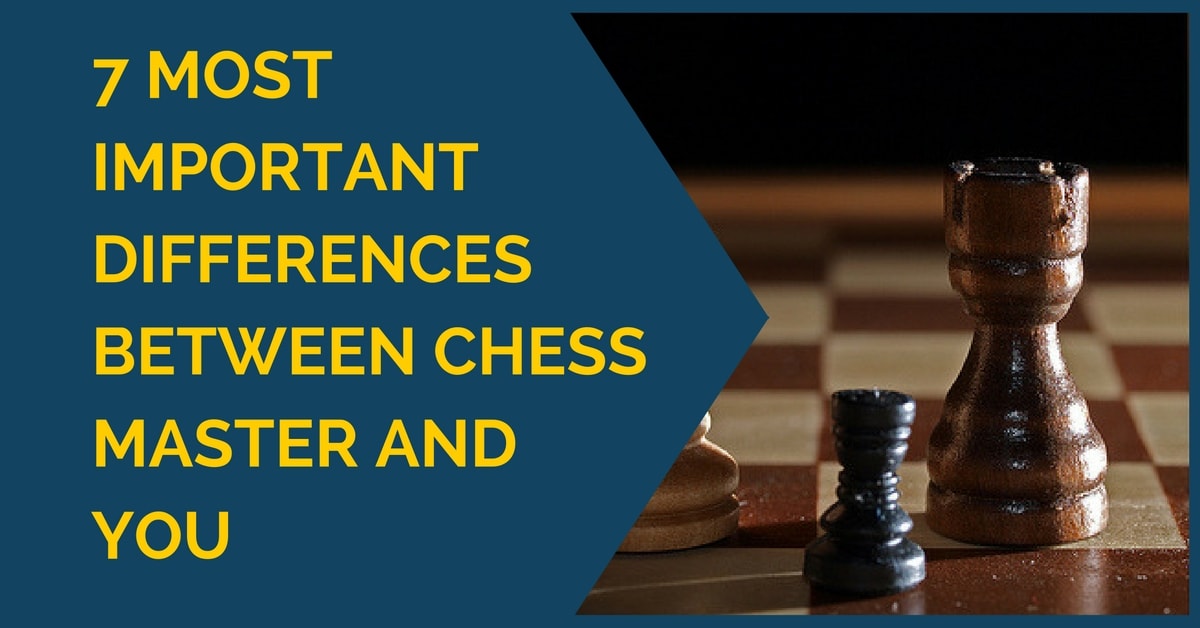 Chess Master and You: What are the differences? A lot of players wonder, what are the main differences between an ordinary player and a chess master? Is that the fact that masters can calculate many more moves ahead and instantly find 5 move tactics? Or does it have to do with experience, intuition, and luck? Or there is something else involved? The truth is there are quite a few things that are important… Let’s focus on it closely.

1. Chess Master plans ahead, while you’re thinking a move at a time

One of the most important differences between a chess master and a regular chess player is the ability to plan the game. Most chess players think one or two moves ahead. Stronger players make a plan without actually calculating the moves. They plan attacks, certain maneuvers, castling, pawn structure changes, etc.

The plan is generally formulated by taking into account certain positional aspects such as space, development, pawn structure, the safety of the kings, and so on. Only after the plan is made, a master player would start calculating how it can be realized. Choosing a correct plan is very important and attributes to a great deal of success in the game.

2. They see patterns, while you’re seeing pawns and pieces

It is known that to become a chess master you need to spend approximately 10,000 hours on chess. It may take much less time if you are a very talented player (aka Karjakin or Carlsen). But generally, it takes about 3-4 years to reach that level of play with some serious training.

When one reaches Master level, he stops seeing pawns and pieces as separate entities. Masters see the board as a whole, paying specific attention to the most important elements. That helps tremendously simplify the thinking process because there is no need to calculate everything, only the so-called “hot spots”.

You may think of it as the heat map. You only need to calculate the red areas and not the blue ones. For an ordinary player, it is rather unclear what to pay specific attention to. That’s why they are far less efficient over the board and need to exert much greater effort to accomplish the same amount of work.

Continuing the previous point, a Master Player knows exactly what variations to calculate. He has a well-developed intuition that tells him where to search for the most promising moves. He just needs to deep-calculate (this will help you to learn how) one or two lines, instead of five like an amateur would attempt to do. Needless to say, that approach saves a lot of time and mental energy, allowing focus only on the most important tasks.

4. They improve their position with every move, while you’re trying to equalize

Master-level players don’t make random moves. All the moves are part of a plan. If there is no clear plan exists, a master player would try to improve his position as much as possible before attempting an attack or a breakthrough. The “improvement process” involves relocating pieces to optimal squares, defending the weaknesses, ensuring the safety of the king, and playing possible prophylactic moves.

After preparation is done a master player would end up with a superior position. He is now ready to launch a devastating attack or to simply squeeze out the life from his opponent’s position. The quality of preparation and timing is something that separates the master-level players from the rest of the field.

5. Chess Master knows when to take his time, while you spend time uniformly

Another common characteristic of a master player is that he knows when and how to use the clock. He knows exactly when to take a break from making moves and when to start thinking about the continuation.

He can identify the key moments in the position, and realize when making the right decision is especially crucial. Amateur players do not feel like they need to take their time. That’s why they usually spend time uniformly throughout the game. It is not the best approach and oftentimes it leads to a lost game with plenty of time left on the clock. Clock management seems to be a minor thing, but only with enough experience do we start using time wisely.

6. They play the opening with a middlegame in mind, while you play just to develop the pieces

It is well known that chess masters know the opening theory 20-25 moves deep. What most players don’t realize is that masters play certain openings because they want to reach a playable Middlegame. Reaching a favorable Middlegame is a primary function of the opening on a high level. However, club players play the opening only to develop the pieces and to put the king into safety (aka castling). If these goals are accomplished in a timely manner the opening play is considered successful.

7. Chess Master know when to go into an endgame, while you do it randomly

Chess masters know how to accumulate small advantages throughout the game and they know precisely when it is time to convert them into a win. Things like doubled pawns, pawn islands, passive pieces, the activity of the king, and passed pawns are strong indicators of advantages and disadvantages in chess. A master-level player knows what kind of edge he needs to be able to win. Once that edge is obtained he will try his best to exchange extra pieces off the board and continue into winning the endgame.

Looking for more on Chess Masters? Look at the 10 Secrets of One, How to Learn to Think Like One?, and How to Beat One at Chess?.