A Guide to Choosing Your Opening Repertoire 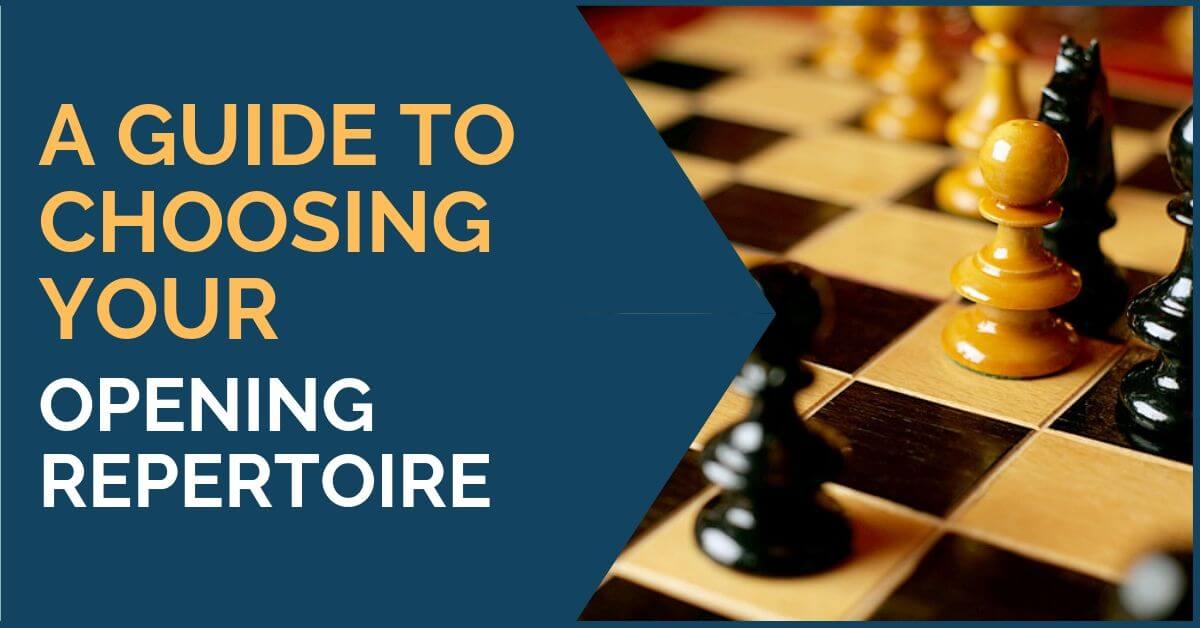 Opening Repertoire: One of the most troubling decisions is to design your opening repertoire. The idea of having a perfect set of weapons against each of the opponent’s possible choices gives us peace of mind. However, there is a huge gap between how we picture this in our head and how it actually works in practice.

We see openings (our repertoire) as something fixed where ideally we would obtain a comfortable position each time and sometimes if we are lucky, we can get even an advantage. I would say that nowadays this rather sounds like wishful thinking and not very practical.

The more realistic dream you can have about the opening is to get a playable position after 15-20 moves (sometimes more) with plenty of time on the clock left to play good moves afterward.

With the goal set clear, let us talk now about what openings we should study. The former World Champion Mikhail Botvinnik was of the opinion that a player should have 3-4 systems with each color in his opening arsenal. I think that this is a reasonable goal for semi-pros and professionals.

Players with fewer opening options are too predictable and it is easy to prepare against them.

It is not a problem of being surprised and caught; after all, if you only play 1 thing you probably know it better than most people. However, you lose all your edge against a weaker opponent who could prepare and play the first 25-30 moves like a top player, for example.  Our opening selections should be based on our playing style and personality.

This only means that if you prefer quiet positions you should not play the Dragon variation with black but 1…e5 or 1…c6 can suit you. You can also follow the choices of a player of your preference. It could be your chess idol or some strong player whose games have had some influence on you.

For example, if you identify yourself with Topalov, then pick the openings Topalov repeats the most. The problem with this method is that the elite can play anything and very often, they are moved by trends. This is why I generally prefer strong GMs between 2600-2700.

Besides the playing style factor, one should look at oneself honestly and think about your own capacity to learn an opening and how deep you should go. What I mean by this is that if you cannot follow the theory on a regular basis or you do not have the time to understand critical lines, perhaps The Grunfeld is not the most practical thing to learn against 1.d4. Instead, an opening less critical such as the Nimzo or the Slav would be more suitable. It is important to make these decisions right once. Personally, I prefer openings that don’t need a lot of maintenance.

They can be considered as “systems” or “schemes”. The upside of playing schemes is that they don’t depend so much on exact move orders; once you learn where the pieces go and the typical plans in the middle game, that’s good enough. The downside is probably that the chances of getting an advantage out of the opening are inexistent. However, as mentioned earlier, the chances of an advantage out of the opening are difficult to get.

If you like to play endgames, play open positions. Contrary to what many people think, you can reach an endgame easier with 1.e4 than playing 1.d4. Closed openings lead to fewer open files and fewer exchanges.

Very often we see great attackers choose restricted openings like Kings Indian Attack, English, closed lines in 1.d4. The reason for this is not only to avoid tons of theory but also to keep more pieces on the board and therefore greater chances of building an attack. One last thing, the surprise element should never be underrated.

Although one should always have the usual repertoire, stay open to playing something new in order to take the opponent quickly into unfamiliar territory. It works most of the time!

We hope that the ideas above turn useful and shed some light on what elements to consider when you are choosing your openings for you or for your students.

Looking for more on Openings? Look at Preparation: Complete Guide.

We also recommend reviewing the 5 Ways to Beat a Chess Master.