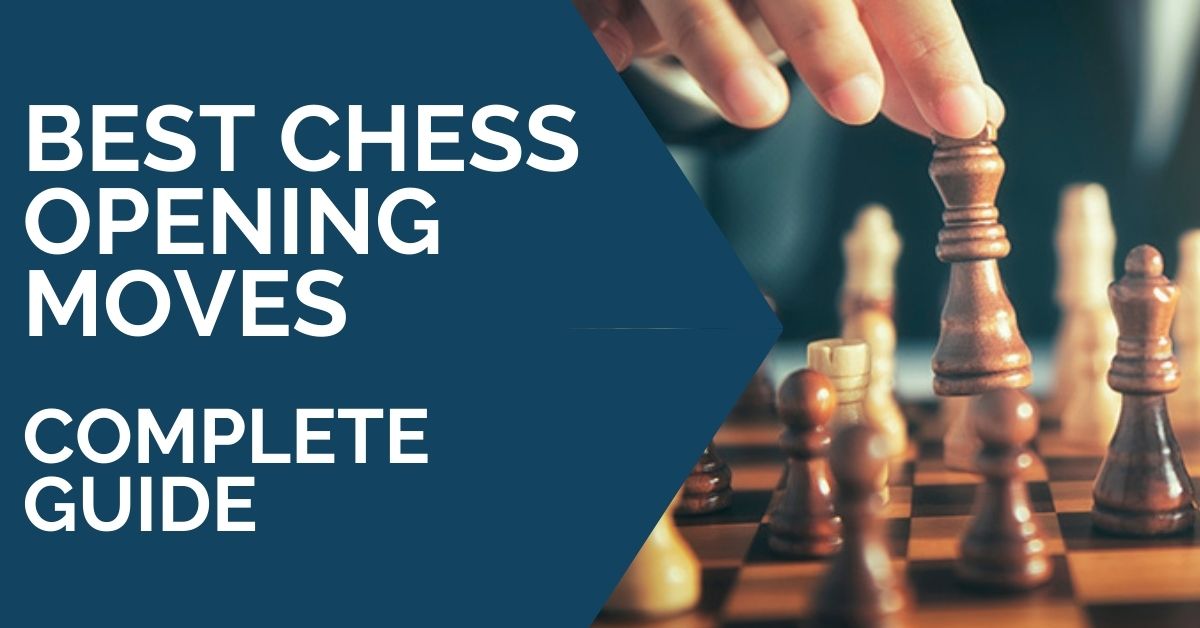 Opening Moves: The possibilities in chess are countless and they grow with each move that we make. In spite of the millions of games that have been played, it is very difficult to find two that are exactly the same. We have to make a choice right from the start and this choice will usually influence the course of the game. If you are a beginner, this might be confusing, as there are many possible first moves and almost all of them have been played before. You can try looking at what some of the strongest players do, but that might only confuse you more. Most Grandmasters have a wide opening repertoire and the openings they use can vary a lot.

Moreover, they know tons of opening theories by heart and some of the lines they use can be too complicated or not make a lot of sense for a beginner. So, what would be the best way to start the game for a beginner? Before we get there, let’s understand some basic, but utterly important concepts:

This refers to the squares that are placed in the middle of the board, plus another extra four to their left and right: 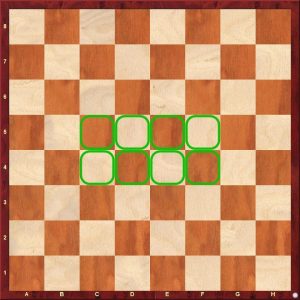 The highlighted squares – c4, d4, e4, f4, f5, e5, d5, and c5 represent the center in chess and they play an important role throughout the whole game. Right from the very beginning, the players begin the fight for their control. If one side succeeds in controlling and occupying them with pieces, they will usually have a much better position for a number of reasons. First of all, they will have more space for the pieces.

Secondly, centralized pieces are active pieces. They control more squares in the opponent’s camp and have more mobility (they are able to get to one flank or the other – depending on where they’re needed – faster).

Now that you know how important the center is in a chess game, you will understand why the best first moves are those that will control it. We have narrowed down our options, but the choice is still quite big.

The second idea we need to understand is that, in order to put pressure on our opponent and eventually win the game, we need to use our pieces. This is why in the opening we should try to get them out as quickly as possible and on the best squares available (central squares or on squares that attack central squares).

Moving too many pawns, for example, would be a rookie mistake – pawns can’t win a game by themselves; the rest of the pieces need to support them.

So, remember – in the opening you should develop your pieces quickly, towards the center of the board.

Another thing you must be aware of right from the opening is your king’s safety. The development has been successfully finished once you have managed to castle (either short or long – it’s up to you).

One common mistake among beginners is to keep the king in the center for too long or start an attack by pushing the pawns while the king is still vulnerable. Such actions can end up badly (and if you’re playing an experienced player, they will), with the side starting them quickly getting mated.

To sum up, the things you should try to do in the opening control of the center, develop your pieces as fast as possible, and then put your king into safety. After you do all this, you can start planning attacks against the enemy king.

Now that you know what it is that you are trying to do in the opening, let’s see how exactly you are going to achieve it. There are many good first moves, but if you are a beginner you will probably want to start by pushing either the pawn in front of the king (1.e4) or the one in front of the queen (1.d4). Players consider these to be the top first moves for a number of reasons.

First of all, both of them start with the advance of a central pawn that will then control two other central squares. Secondly, both moves open two other pieces – the queen and the bishop, though in different ways. 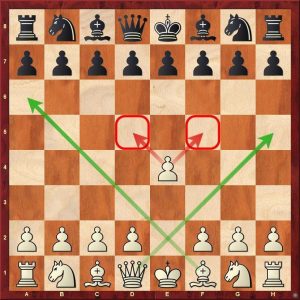 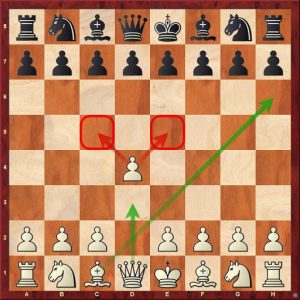 If you start with the Queen’s pawn (1.d4), you will open the c1-h6 diagonal for the dark-squared bishop and give the queen two more squares on the d file (d2 and d3). This move leads to closed positions, with less contact between the pieces. This could mean more maneuvering in some situations, but also increased chances of attacks after the development has finished.

If you have the black pieces, you can do the same – if white starts with 1.e4, you can answer with 1…e5 and to 1.d4 you can play 1…d5. These moves lead to classical openings that you can later improve on.

In time, you can add new openings to your repertoire or eventually completely change it, depending on your style of play and the types of positions you are looking for.

After pushing the central pawn, you should focus on the pieces.

Remember – we want a quick development!

The bishops, however, have options and we can decide on that later on. Once the minor pieces (bishops and knights) are out, you can finally castle and get the king into safety.

Here is one example of good development: 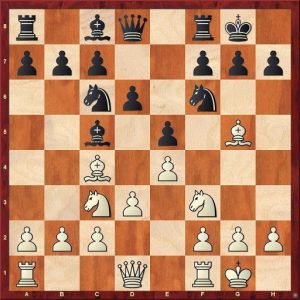 This is of course not the only way of developing your pieces, but the same principles apply in different positions – control of the center, king safety, and piece mobility.

The positions will look differently if you start with 1.d4, but if you guide yourself after the ideas mentioned above nothing bad will usually happen to you, at least not right from the opening.

Looking for more on Openings? Look at the 5 Most Important Opening Ideas You Must Know.

We also recommend reviewing How to Defend in Chess — 7 Most Important Defense Principles.

Related Products
5 4 votes
Article Rating
Login
0 Comments
Inline Feedbacks
View all comments
Join the FREE Road to 2200 Masterclass (and learn how to Attack Like a Chess Master)
We value your privacy
Supercharge Your Chess in 21 Days!
Join Academy Today!